Not Without My Daughter: Gallo Blunders with Absurd Thriller 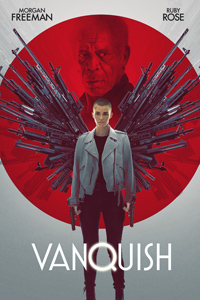 The appeal of beholding a train wreck is assuredly a vibe based upon the morbid yet innate curiosity such tragedies inspire in humans. In a metaphorical sense, a film which earns a facetious comparison to the trauma of a vehicular accident can tend to court a cult audience, most often when accidental entertainment (i.e., camp) is the result.

Longtime Hollywood scribe and director George Gallo, who penned the 1988 comedy classic Midnight Run and received story credit for 1995’s Bad Boys, lassos Morgan Freeman for a third time in the risible Vanquish, a Z-grade action thriller penned by Samuel Bartlett (originally written in 2014). Fans of so-bad-it’s-good cinema could potentially make a case for its appeal based on the interest of its two leads, but such arguments would be grasping at straws.

In an extensive four-minute plus opening credit sequence, we learn Damon (Freeman) is a crooked ex-cop involved in a tragedy which left him paraplegic. In a confessional booth, he advises an equally corrupt priest of his plans to help a “friend” whose daughter’s medical condition requires services she cannot afford. Said friend is Victoria (Ruby Rose), who has a particular set of lethal skills thanks to her time working as a courier for the Russian mafia alongside her brother. Damon manipulates Victoria into believing he needs her to make five dangerous pick-ups over the course of one evening and feigns kidnapping her child to ensure her compliance. As Victoria cuts a swath of violence through the city whilst securing bags of cash from Damon’s secret squad of corrupt law enforcement officials, she learns he has more than one secret up his sleeve.

Perhaps what’s most irritating about Vanquish is how it dares to take itself seriously, as if Gallo presumes he’s sailed off into some Walter Hill/Nicolas Winding Refn zone (directors of The Driver and Drive, respectively) based on the considerable amount of time the narrative spends in transit (which tries to avoid feeling like dead space by continual flashbacks to sequences which we saw moments prior).

Surprisingly, the film’s sick, jaundiced veneer works against it, mainly because there’s no distinction (until quite late in the narrative) between exterior and interior universes of fungus green and vomit yellow combos. Lensed by Anastas N. Michos, (who served as cinematographer on the underrated The Empty Man as well as The First Purge) it seems the film’s budget was meant to be concealed by these visual choices, but only adds to the cheapness.

Unfortunately, both Freeman (who appeared in Gallo’s The Poison Rose and The Comeback Trail) and Rose aren’t able to overcome the trappings of this woefully rigid scenario, which feels like an homage to exploitation films but seems allergic to humor (speaking of Hill, Gallo’s Vanquish feels more akin to 2016’s The Assignment, also a film where a queer lead knocks about in an outlandish scenario while a choice veteran performer is more aware of the material’s tone).

Freeman’s prone performance feels as if it was captured in one wearying, day-long shoot, while Rose hasn’t mastered the distinction between gruffness and monotony. By the time we get to Gallo’s wife Julie Lott (who serves as executive producer and appears in all his productions), resembling an SNL caricature of Gretchen Whitmer, Vanquish vanishes beyond the point of no return.