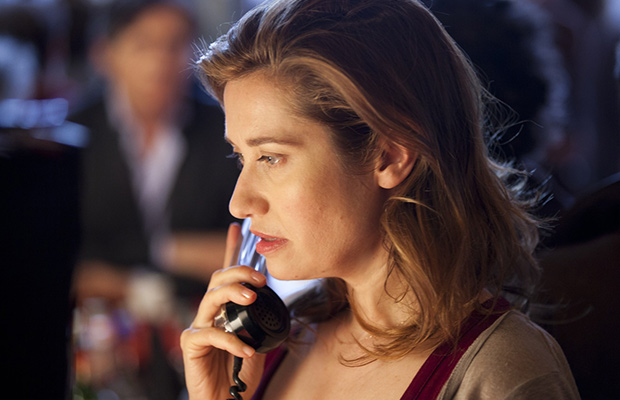 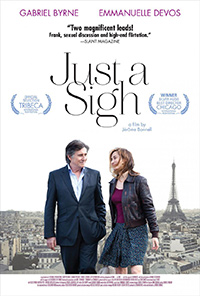 With his fifth feature, Just a Sigh, (a butchered translation from what really should be The Time of Adventure), director Jerome Bonnell revisits themes he seems inspired by, as he reunites with the lovely Emmanuelle Devos for a tale that sounds like a distant cousin to his 2002 debut, Le Chignon d’Olga. While there’s certainly a whiff of Lean’s Brief Encounter that might glance through your mind like a musty phantom, this is a mostly lighthearted carefree romp through a day in the life of a woman who does something that most people seem to fantasize about—making love to a proper stranger.

Alix Aubane (Devos), a perpetually broke actress in the midst of performing Ibsen’s “The Lady and the Sea,” absconds to Paris for a film audition. Forgetting her cell phone charger, she leaves fraught messages for her boyfriend Antoine (voiced by Denis Menochet). On the train, she spies a handsome and somber gentleman (Gabriel Byrne), who ends up being English and asks her for directions to a church. Interrupted by another passenger who provides detailed directions, she reluctantly parts and attends her audition, which doesn’t end up feeling quite fulfilling. On a whim, she decides to check out the church the man had been asking about, and there she finds him, attending the funeral of an old flame and classmate of his. Alix is invited to a nearby bar for a drink by Rodolphe (Gilles Privat), another attendee, which brings her into close proximity with the man, who seems to be equally interested in her. Finally catching a moment alone, they give into their barely contained passion, and we learn a bit more about Alix’s relationship with Antoine. While they’ve just met, he seems inexplicably drawn to her, and makes a tentative offer to bring her back to England with him.

If you get too stodgy about it, you might get hung up on questioning the credibility of what transpires, especially in a modern, over connected world where organic romantic tinglings first have to be filtered, accounted for, or contend with technology. And Bonnell certainly doesn’t approach the material with a dramatic hand, instead gliding in and out of Alix’s various issues during what seems her customary, helter skelter mind frame. But if this situation were to occur, Just a Sigh unfolds and ends on realistic note.

Byrne, (one of a burgeoning number of English speaking actors to pop up in French cinema to woo Gallic gamines, like William Hurt or Kevin Kline) is a quietly believable presence here, but the show belongs to the expressive Devos. In the midst of performing Ibsen, she heads to Paris for an audition that’s quite demeaning, but damnit, Devos is transfixing here, knocking it out of the park as she performs a scene in two completely different emotional registers, back to back. Likewise, an antagonizing sequence which finds her asking her estranged sister for pocket money is equally transfixing.

While the title of its English translation has a rather soapy aftertaste, Bonnell’s latest is a surprisingly effective two-hander, conveying an unprecedented emotional depth about passion, the performance of it, and how life has a surprising way of reminding us how to feel alive.