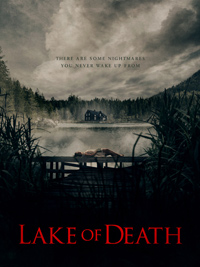 The inherent value of any remake, sequel or reboot is always the attention it funnels back to the (usually) superior material it was inspired by. Such is the best-case scenario for the third feature from Norway’s Nini Bull Robsahm, which promises some lurid genre potential with the title Lake of Death. Robsahm modifies and arguably modernizes the title, which is inspired by the 1958 classic Lake of the Dead, a celebrated horror film directed by Kare Bergstrom, based on a 1942 novel by Andre Bjerke. Although beautifully photographed and well-enough acted by a handsome quintet of players, Robsahm’s script is frustratingly opaque for an homage to a film which jumpstarted the popularity of cinematic genre in her native country.

A year ago, Lillian’s (Iben Akerlie) twin brother Bjorn (Patrick Walshe McBride) went missing in the woods surrounding their remote family cabin. With the property about to be sold, she takes one last trip to the location with a crew of friends, including ex-boyfriend Gabriel (Jonathan Harboe), Sonja (Sophia Lie), and her boyfriend Harald (Elias Munk). Bernhard (Jakob Schoyen Andersen), who hosts a popular podcast about urban legends and supernatural happenings, is along for the trip since the lake and surrounding area were once notable because of a murder wherein a jealous husband killed his wife’s lover. With relationships already balanced tenuously, further taxed by the initial presence of Kai (Ulric von der Esch), a figure from Lillian’s past who seems to have far from platonic intentions, Lillian’s mental acuity begins to unravel. When a hidden basement and a spooky diary of Bjorn’s are discovered, the situation starts to get dire for these unhappy campers.

The most significant issue with Lake of Death lies not only in how predictable its twists are revealed but how lackluster they are, especially considered some potential ambiguities it could have teased. Yes, it’s based on another film, but it ignores the original’s focus on building atmosphere. Robsahm takes the ninety-plus minute feature on a slow-burn journey but fails not only in building menace and dread but the important necessary character work for the audience to care about anything going on. And so, this quite Westernized feeling version of a Norwegian classic feels akin to American slasher films of the 1980s, its cabin-in-the-woods setting more along the lines of Sean Cunningham’s Friday the 13th (though one might be hoping for something more elaborate, though perhaps less problematic, than the psychological trauma reveal of Sleepaway Camp). Pointed references to The Evil Dead, Misery and A Nightmare on Elm Street feel as if these are red herrings to instill ambiguity about potential supernatural vs. explainable happenings.

Certain details, such as blocking and dialogue in a few sequences as relating to Lillian’s mental state, are surprisingly slapdash. Iben Akerlie, is, by default, a brooding standout in the cast, but the regular hallucinations her potentially unbalanced character experiences feel rote instead of inspired. The usual jocularity and sinister sexuality are light touches with the supporting male characters, but once all the exposition is revealed (or all made available) about Lillian and the symbiotic relationship with her brother, Robsahm neglects going deeper into the dysfunction which would better allow us to understand her. However, Lake of Death was edited by Oscar winner Bob Murawski (Drag Me to Hell; The Hurt Locker), and as shot on 35mm by Axel Mustad, it’s a beautifully photographed and edited piece of genre work.