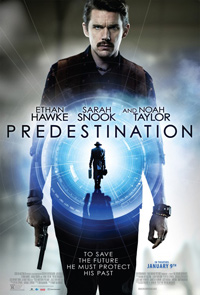 Though it gets off to an idle, clunky start, the Spierig Bros, an Australian directing duo, rifle through the catalogue of vintage science fiction writer Robert A. Heinlein as inspiration for their third feature, Predestination. Premiering at the 2014 SXSW Film Festival, the title is unfortunately being dumped in the undesirable January period for its theatrical release, connoting that the film doesn’t have much to offer. Perhaps more ambitious than its means, it’s a film that manages to intrigue and engross with a narrative that virtually creates the odor of the musty, yellowed pages of the writing style it’s been borrowed from. While some may have a problem with the treatment of certain subject elements, dated precariously from a less enlightened period, the Spierigs, if nothing else, capture a certain nostalgic energy for this material, like an insect trapped in amber.

In late 1970’s New York City a man known as the Fizzle bomber has proved to be unstoppable for over a decade. We meet a time traveler that’s known as a Temporal Agent (Ethan Hawke), working for an organization that has the ability to travel through time to prevent heinous crime and make the world a better place. However, the Fizzle bomber has eluded their tricks every time. But as the Agent comes closer than ever before, he burns half his face off, requiring considerable plastic surgery. We move on, to a time when the agent is now working as a bartender, and he strikes up a conversation with a mysterious, androgynous stranger who begins to relate his fascinating story. Upon completion, the bartender reveals his own set of secrets and so a highly complicated narrative unfolds.

Predestination is reminiscent of Hilary Brougher’s 1997 indie sci-fi The Sticky Fingers of Time, which dealt with similar elements of death, time travel, and intriguing queer elements often left out of such genre narratives. Of course, it’s almost immediately apparent that something is quite off about the appearance of the stranger at Ethan Hawke’s bar, a man that writes a confessions column known as The Unmarried Mother who has a shocking story to tell.

It’s perhaps an archaic use of the transsexual in today’s current terminologically sensitive climate, recalling something like Irving Rapper’s The Christine Jorgensen Story (1970), where transsexualism equaled tawdry sensationalism. But the Spierig’s aren’t dismissive or exploitative to John/Jane, and it’s a character performed with great finesse by actress Sarah Snook, with makeup, wardrobe and twists that recall William Castle’s use of actress Patricia Breslin in his 1961 Psycho knock-off, Homicidal. Likewise, the film serves as an interesting examination of attitudes about gender norms that hardly feel as ‘vintage’ as they should.

It’s use of time travel and the notion of altering past crimes and mistakes will likely draw comparisons to Rian Johnson’s Looper, but the Spierig’s have concocted something more complicated and overreaching, something that may not always logically seem to make sense. Likewise, despite all its complex patterns crisscrossing through time periods, you’re going to be able to discern some of its bigger reveals ahead of time, because inevitably you’re going to be concentrating on just how its two main characters know each other. But whatever its faults, Predestination is excitingly ambitious.

Outside of his critically acclaimed presence in American indie films, Hawke has a curious ability to pick surprisingly effective and sometimes original genre projects (this doesn’t always work if you consider The Purge). But the film’s real revelation is Snook, looking beautiful as a young woman and rather like young Edward Furlong as a man. And beyond whatever critiques or reservations some may have about her character, she gives an effective and memorable performance.