And Tso It Goes: Cheney’s Cuisine Opts for Sugar over Spice 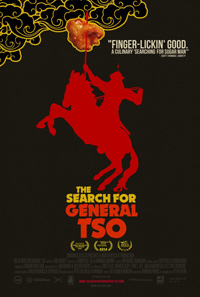 It should go without saying that cuisines considered Chinese in the United States are hardly authentic recipes from the mother region from whence they came, and, at best, are pale echoes of inspiration. The same can be sad for that annoyingly middlebrow terminology referring to dishes that are “Tex Mex,” or any number of bastardized Italian dishes. In the great American melting pot, international cuisines have assimilated into the acceptable cultural fabric more so than the people responsible for creating them, and so starts the slightly evasive culinary documentary The Search for General Tso from documentarian Ian Cheney. Eventually, we get around to the actual dish that is the subject matter of the film, but it necessitates a more intriguing examination of the inherent racism of a dominant culture that had a helping hand. A crash course in the culinary evolution of Chinese American food is really what Cheney charts, though with such heady elements, one would have hoped there was more to savor.

We go back to the 1882 Chinese Exclusion Act, legislation that allowed white Americans to curb the influx of Chinese immigrants, driving out the large population that flocked there during the Gold Rush. Cutting them out of the labor force, they were only allowed to work in Laundromats and restaurants, and to realize the ramifications this would have on generations to come is eerie and unfortunate to contemplate. And so, within these already limited means, resilient and inventive people found a way to adapt their dishes to fit the “blandness” of the American palette, initially finding success with the dish, Chop Suey (too bad Cheney couldn’t nab the rights to the song of the same name from the 1961 Rodgers and Hammerstein musical Flower Drum Song for extra textual flair). The downfall or cultural boredom rather, with that famed dish left Chinese cuisine in need of something more inventive, which is where Cheney starts to funnel attention towards his thesis dish. However, it’s also at a point where examinations of racism become more trenchant, as he interviews several aged restaurant owners that suffered despicable misdeeds, such as a gentleman in Illinois whose restaurant was dynamited because the town was angered at the mere thought of a Chinese businessman. He would later invent Cashew Chicken, another tenet in today’s menus across the nation.

But when we do finally focus on the title dish, some interesting ironies exist, namely that it’s not something with which indigenous Chinese people from the Hunan province are familiar with, as evidenced by Cheney’s trip to interview many locals who had no idea what they were looking at. More interesting is the fact that the real General Tso, who lived from 1812 to 1885 in the late Qing Dynasty, was adverse to the influences of Western culture and politics, and he’s now honored by being named after one of the most popular Chinese American dishes ever made.

As we delve into its ‘actual’ creation, which originated in 1960’s Taipei and later inspiring the dish that would it be known as in 1970s San Francisco, we get a snippet of dueling authorial claims, though Cheney resists championing either side. While there’s something positive to take away from all this, namely that there is the possibility of defining something as uniquely American in that a mutating alteration affords us a wide array of tastes and temperaments that bear a ‘likeness’ to their origins, one wonders why Cheney didn’t push for something a bit more unyielding, rather than making The Search For General Tso more like something frittered away on the Food Network.