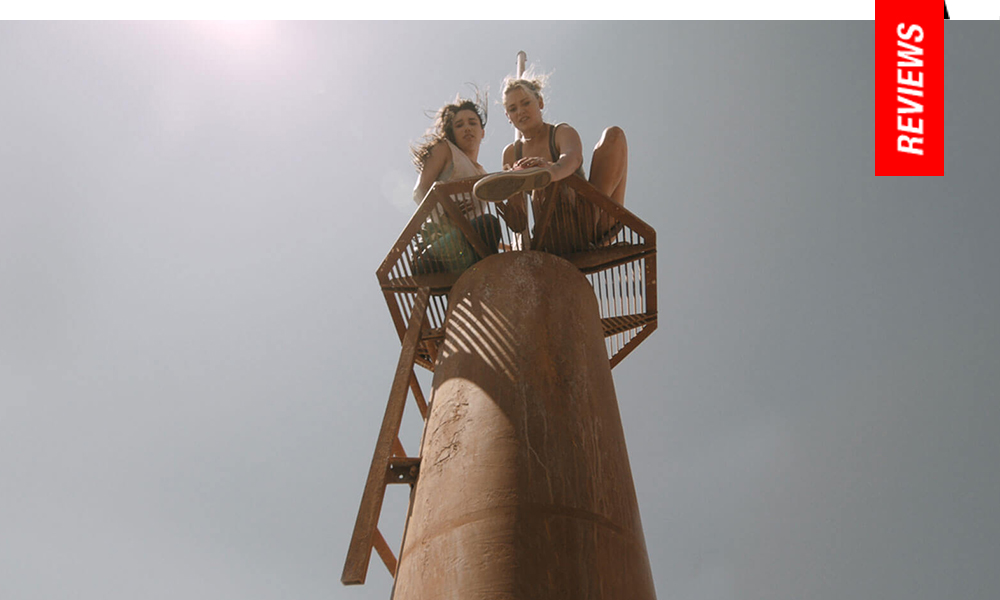 From the depths below to the heavens above, there’s no place safe for adrenaline chasing white women, at least according to 47 Meters Down (2017) producers Mark Lane and James Harris, who reconfigure the direction of their imperiled damsel formula for Scott Mann’s Fall. A simple plot packed with tangentially excessive window dressing to pass the time, this odyssey of two young women stuck 2,000 feet in the sky atop a perilous television tower is effective in its ability to induce anxiety (if not vertigo for the hyperbolically inclined). Despite some corny introductory dialogue before the first act ramps up, there’s a lot to enjoy thanks to increasingly fraught performances from its two leads and some inventive camerawork from DP MacGregor (Vivarium, 2019), and accomplishes exactly what it aims for in all its modern B-movie majesty.

When Becky’s (Grace Fulton) husband (Mason Gooding, Scream, 2022) unexpectedly falls to his death while they’re rock climbing with her best friend, Hunter (Virginia Gardner), her life quickly unravels. A scant fifty-one weeks later, with her father (Jeffrey Dean Morgan) unsuccessfully attempting to goad his daughter to embrace life again, Becky is coerced into joining Hunter, now a YouTube star, into climbing the B67 TV Tower, the fourth highest structure in the US, which stretches nearly two thousand feet into the sky. Becky is, of course, reluctant, but the chirpy Hunter convinces her she’ll never be able to get over her fear unless she meets it head on.

While a majority of the tower features a ladder with an enclosed iron cage, the final two hundred feet reaching to a pizza-shaped platform at the pinnacle, is exposed to the elements. Shortly after reaching the platform, the rusty ladder crumbles beneath, leaving them stranded without cell service. A flare gun and binoculars initially prove to be promising, but as hours turn into the next day, Hunter daringly uses a rope to collect the backpack which contains their supplies (and a drone) stuck on an apparatus attached to the tower just below them. Despite their tenacity, their inventiveness is thwarted at every turn…until Becky decides she can and will survive, no matter what. 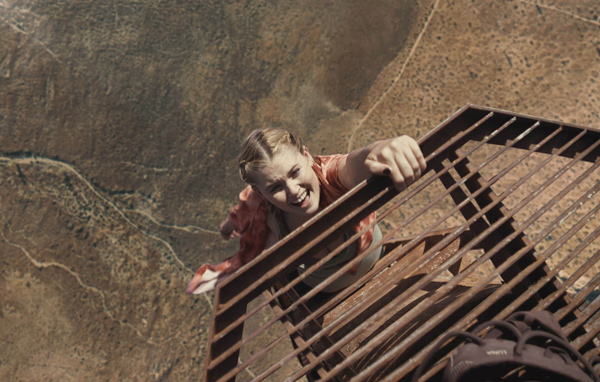 Mann’s script, co-written by Jonathan Frank, hits all the familiar marks featuring women stuck in claustrophobic (or, in this case, agoraphobic) situations, a third act reveal hurtling down the hoary road of mental fatigue induced hallucination. Due to its pared down narrative parameters, every bit of information is, predictably, recycled, from how to jimmy a lightbulb socket for electricity to the confirmation of infidelity. But it’s an elevated showcase for Mann, whose two previous titles, Heist (2015) and Final Score (2018) were both generic action fodder featuring notable cast members (Robert De Niro and Pierce Brosnan, respectively).

Mann reunites with Jeffrey Dean Morgan from Heist, though here in a throwaway role as Becky’s distressed dad (who doesn’t seem to have any investigative skills in trying to figure out where his daughter is by searching through Hunter’s apparently vibrant social media). It’s unfortunately the type of spare narrative leaving itself open to nitpicking, such as wondering why the women don’t think to attach one of their phones to the drone and sail it down to the ground, etc. But the film eventually settles into an effectively tense pattern, assisted by the increasingly desperate Becky and Hunter, the former reclaiming her zest for life following the opening death of her husband (the time lapse of 51 weeks later is laughably, unnecessarily exact). 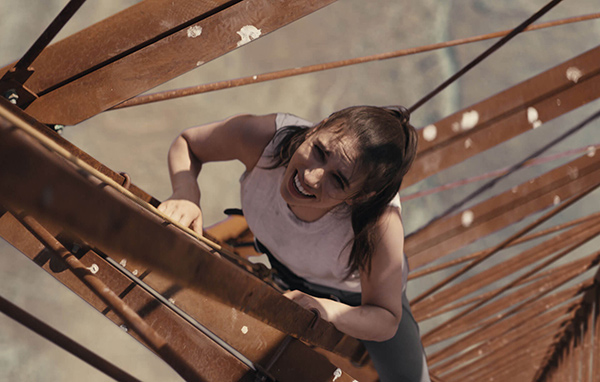 Grace Fulton (nee Curry) is gifted with the meatier role, while Virginia Gardner settles into her own rhythm, her initially annoyingly cheerful facade revealed to be a cover for a terrible secret (though one the film oddly and awkwardly alludes to, and could have been used to suggest something much more sinister about the opening tragedy). The scavenging vultures (initially labeled as ‘pricks’ by Becky as they nibble on an animal carcass at the base of the tower) are eventually featured in the most dramatic moments, effectively mining the film’s underlying survival motif, where those who want to liven are driven to the most drastic (or, arguably, natural) actions. A moody track from Madison Beer, “I Have Never Felt More Alive,” which channels the eeriness of Alanis Morissette’s City of Angels (1998) tune “Uninvited,” closes out the film’s simple, but enjoyably harrowing experience.