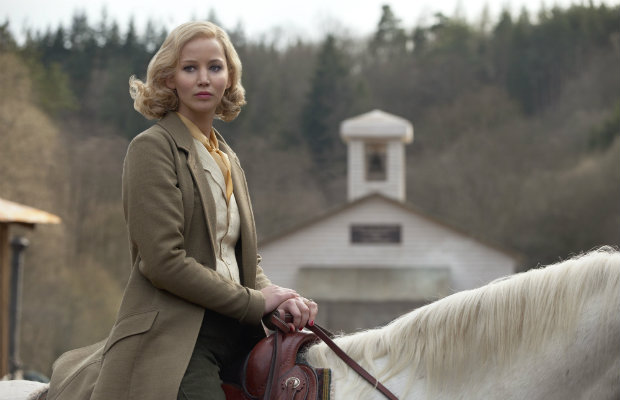 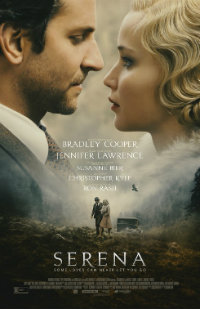 Danish director Susanna Bier’s second English language film, Serena, has gained a bit of notoriety after an unexpected delayed theatrical release in the US. A melodramatically inclined period piece based on a novel by Ron Rash (author of The World Made Straight, of which an adaptation was released earlier this year), the lush production design and starry cast creates a misleading veneer, which slowly gives way to a rather kooky portrait of its eponymous lead character. Presented with soberingly grim determination, the film lapses into unintentionally laughable territory, though not to a degree worthy of camp aesthetic or cult following.

Filming shortly after their award winning collaboration on 2012’s The Silver Linings Playbook, the first onscreen reunion of Jennifer Lawrence and Bradley Cooper finally saw a premiere at the 2014 London Film Festival and reactions have been generally non-plussed considering the pedigree of the project. In the North Carolina Smokey Mountains of 1929, George Pemberton (Cooper) has begun to erect his timber empire with the help of his best friend and right hand man, Buchanan (David Dencik). But upon being introduced to the mysterious Serena (Lawrence), Pemberton is immediately smitten and pursues her hand in marriage upon finding her to be the capable equal he’s been seeking. Serena acclimates quite easily to her new surroundings, taking on the role of a foreman as she oversees the daily work of the men. The local Sheriff’s (Toby Jones) bid to secure the land for a national park is one of their first challenges that fuels the overzealous ambitions of the Pemberton’s, whose reach rises above that of common man. But it’s not long before the love-struck duo learns that they cannot so easily overcome every obstacle.

Lawrence’s Serena is introduced as a troubled woman from her introduction, her tragic past relayed to Pemberton as a juicy bit of gossip as we watch her on horseback. The foreboding nature of this tragedy gets placed on the back burner, and instead we’re fascinated with Serena as one of those strong willed females shirking social constraints from a period where that seemed impossible. Her introduction is reminiscent of old Barbara Stanwyck characters after the inception of the Hays Code, like 1935’s Woman in Red, for instance. Her whirlwind romance with Pemberton is also sterling Hollywood convention, wherein marriage is uttered within several minutes of their initial meeting.

But then it’s hard to determine what’s exactly to blame for this spiraling quickly out of control. As far as Christopher Kyle’s screenplay is concerned (perhaps his best if compared to The Weight of Water and Alexander), the peripheral strangeness that begins to infect the film could definitely have been amped up a bit, especially considering how little we’re allowed to learn about either George or Serena in their prior lives. Many critics (and audiences) seem to have a problem watching unlikeable characters, which is an annoying standard to hold films to—unlikeable people are a reality, so please let’s not demand that every film display all or at least one sympathetic character. That said, there’s a chilly distance in the portrayal of George and Serena, privileged people engaged in the early stages of an empire, ancestors of those lofty one percenters. The character Serena at first recalls those flinty William Wyler heroines played by Bette Davis, particularly her murderous rubber plantation owner in The Letter (1940). But then, without due process, she becomes straightjacketed into a Blanche Dubois demise when it seems the narrative no longer has a need for her deviousness.

There’s a strange mysticism operating throughout Serena, circling around the Galloway character (whose name purposefully evokes the site of death) played by Rhys Ifans, a man with second sight. The bizarre relationship that develops between himself and Serena becomes more interesting than George’s (incredibly convenient) moral quandary concerning his bastard child. Galloway is also responsible for hunting the exotic panther that George so desperately wants to shoot, a rare, primal creature whose sleek beauty Pemberton desires to conquer. Serena, of course, is aligned with this creature, a clunky motif that isn’t handled with finesse.

Cooper and Lawrence make a likeable enough on-screen pairing, but they are both oddly distracting here. Lawrence especially seems unable to handle conveying Serena’s vulnerability, leading to some incredibly silly sequences such as when she’s drunk and makes a scene in public. The constant affections of her love for George also seems strained, and as wonderful a young actress as Lawrence tends to be, she’s simply too young for the seething depths of complicated anguish such a portrayal demands. Cooper fares a bit better, but he’s got the easier role as a rather dopey, clueless male.

Bier’s supporting cast includes an expressive number of international faces, including Toby Jones, Sean Harris, David Dencik and Ana Ularu (plus Kim Bodnia appears in one very brief instance). Bier’s usual DoP Morten Soborg captures a lush, isolated community effectively, even when we’re distracted by less appropriate elements. Compared to Bier’s last English language film, 2007’s Things We Lost in the Fire, which also was treated to a mute reception, Serena is a bit more of a mixed bag, but for lovers of obscurely odd productions, it certainly has entertaining moments.