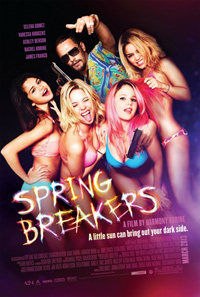 In Harmony Korine’s previous work, from his incendiary debut Gummo all the way through the almost-impenetrable Trash Humpers, he afforded his audience the luxury of distance. The people who watched his films celebrated Korine’s authentic absurdity because it in no way resembled their respective realities. His public persona, such as his infamous Late Show visits, brought him enfant terrible status; it is impossible to know if everything he’s said in interviews is real and almost as implausible for that to be the case. Korine and his films provoke laughter but it’s a disingenuous laugh, one used as buffer, not as release. Not so for Spring Breakers.

In this his most pronounced foray into commercial filmmaking, Korine has erased the comfortable gap between the mundane and the deranged, the centre and its Other. He implodes the American Dream, shows that the other side of wealth is greed, that pleasure soon becomes narcissistic hedonism, that the descent into hate and violence is not as steep as you think. These four girls, seeming typical college students, want nothing but the sheer ecstasy of spring break: this fact is never questioned, it is a given that personal satisfaction is the only worthy end. Faith (Selena Gomez) is their conscience but even she is easily won over by a little coaxing and effortless peer pressure. The girls (also comprised of Vanessa Hudgens, Ashley Benson and Rachel Korine) make their pilgrimage and this Mecca seethes with lustful debauchery. Men denigrate women and themselves, any drug is available at a moment’s notice, music blares, the sun shines. It’s everything they hoped for and more.

St. Petersburg, Florida glows, pops, shines, nearly boils over; even at night it seems bright out, the girls’ bikinis, sneakers and smiles aglow in the dark. Everyone is always smiling, always having fun but it’s manufactured, bought, and so comes at a cost. Each experience, every lewd gesture, has a price tag hanging off of it. This is no accident. When the girls meet the rapper/drug dealer/gangster Alien (James Franco), he is the spokesperson for gluttony, proudly putting into words what the girls had been working toward all along: the worship of stuff, of now, of me.

The transparency of Spring Breakers is misleading. On the surface, it is all too easy to create that luxurious distance and scoff at the depravity. But the incessant need for distraction, the worship of empty sex, and the desensitization to horrific violence is in everyday life, and you don’t have to look too far. In this world, Korine’s and ours, a toy gun can be used as a weapon and the much more dangerous obverse is true as well, a weapon can be seen, and so used, as a toy. These sad, hard truths are all around us. Korine just wrapped them up in a shiny, seductive package, and put a bow on top.

Jesse Klein (MFA in Film and Video Production from The University of Texas at Austin) is a Montreal-born filmmaker and writer. His first feature film, Shadowboxing, (RVCQ '10, Lone Star Film Festival '10) . As well as contributing to IONCINEMA, he is the senior contributor to This Recording and writes for ION Magazine and Hammer to Nail. Top Films From Contemporary Film Auteurs: Almodóvar (All About My Mother), Coen Bros. (Fargo), Dardenne Bros. (Rosetta), Haneke (The White Ribbon), Hsiao-Hsien (Flowers of Shanghai), Kar-wai (In The Mood For Love), Kiarostami (Close-Up), Lynch (Blue Velvet), Tarantino (Jackie Brown), Van Sant (To Die For), von Trier (Breaking The Waves)