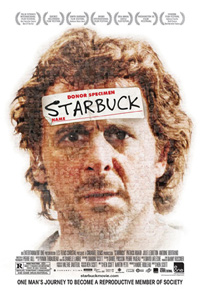 Canadian filmmaker Ken Scott managed to make a funny and heartfelt crowd pleaser with his 2011 sophomore effort Starbuck, so it’s not much of a surprise that he’s helming the Vince Vaughn starring American remake of his Quebecois hit. Who knows what, if any, excessive changes will be made to the English language version, which will be known as The Delivery Man, but while this is an amicable film, the original is also conspicuously scatterbrained and without the gumption to make any real observations about its superficially daring premise.

Well known French Canadian actor and comedian Patrick Huard stars as David Wozniak, a 40-something ne’er-do-well that enjoys sports and lives off the family butcher business as a deliveryman. While his relationship with Valerie (Julie LeBreton) is tempered by his rampant inattentiveness, just as she announces she’s pregnant with his child, David is informed of a class action lawsuit against him. Apparently, back in the 1980s, David lived by a sperm bank which he frequented quite often. The sperm bank accidentally inseminated 533 women with his 600+ sperm samples and now 142 of those children have filed a lawsuit against the donor known as Starbuck. Intrigued but unsure of what to do, David consults his friend, who also happens to be a mediocre lawyer (Antoine Bertrand), and they concoct a plan to get some money for David, which would help pay off his considerable debts. David owes some nasty people $80,000, and they are starting to harass his very loving and patient family members. But as David begins to follow and ingrain himself in the lives of the 142 children that have been trying to reach out to him, David finds himself wanting to be their guardian angel, and earning money at their expense somehow doesn’t seem the right thing to do.

Much of Starbuck’s charm rides on the effervescent performance of Patrick Huard, who has an affable charisma that makes him completely believable as a chronic underachiever that still manages to find love and acceptance from friends and family. It will be curious to see how the remake works with the casting of Vince Vaughn, someone mostly devoid of charming attributes. Perhaps Scott will have the opportunity to get beyond the superficial sentimentality on display in nearly every frame of Starbuck, which reduces a pregnant girlfriend and violent loan sharks to the convenient backburner as it sees fit. While the original premise may indeed have vague roots in some similar real life scenarios, Scott’s narrative never manages to transcend a certain gimmicky tone and wastes too much time on David following several of his children around, helping heroin addicts, struggling actors, and lifeguards with equal aplomb, though treatment of a handicapped child and a closeted gay kid are handled less comfortably.

Surrogacy and sperm banks, of course, aren’t handled as serious matters at all and the screenplay fluctuates wildly from cornball (pizza delivery man saves girl from overdose) to utterly ridiculous (like the press blaming the anonymous sperm donor for all these fatherless children). As all gets patched up easily and predictably, we’re hardly left basking in that afterglow we’re supposed to feel after a satisfying commingling, and it’s not hard to see why Hollywood smells dollar signs with a remake of this seemingly audacious but ultimately conservative formulaic comedy.