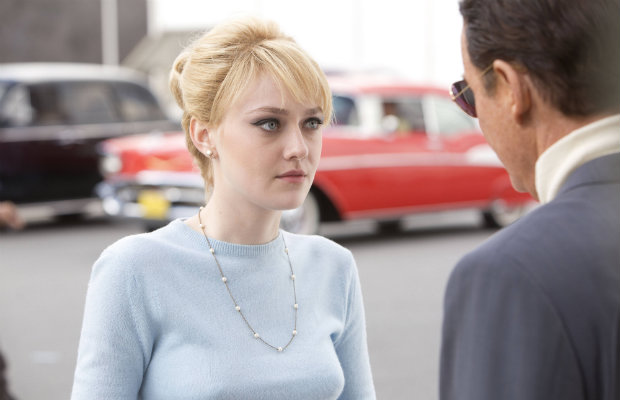 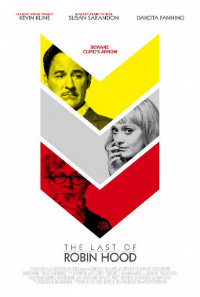 It’s been eight years since Richard Glatzer and Wash Westmoreland’s 2006 sophomore film, Quinceanera swept up the Audience and Grand Jury Prize awards at the Sundance Film Festival. The directing duo is back with a re-ignition of an old Hollywood scandal in The Last of Robin Hood, a glance at the final years of Errol Flynn and his romantic entanglement with a female minor. While the material is unerringly fascinating and features a trio of notable names, it’s a rendition that feels a bit too polished and hardly as seedy as it should be. It seems attempts have been made to assuage unnecessary heartache to the relatives of the ingénue at the center of this strange ménage-a-trois, and the resulting film seems a heavily polished reenactment too apprehensive to really get its hands dirty. Yet, the end product is not without a certain amount of interest.

Opening in October of 1959, the news has just broken that Hollywood icon Errol Flynn has died in the arms of his lover, a female minor and burgeoning starlet, Beverly Aadland (Dakota Fanning). The scandal deepens when the press learns that Beverly’s mother, Florence (Susan Sarandon) had approved of the relationship and had been aware of the affair since it had begun two years prior when Beverly was just fifteen. The affair is recounted in retrospect as Florence recounts her version of the relationship with a reporter in preparation for her tell-all book, The Big Love.

Kline is an inspired casting choice for the hard-drinking Flynn, sometimes resembling the debonair performer who had dashing yet generic looks. It avoids the distraction of distinction that cripples other modern recreations from the studio age (say, Michelle Williams as Marilyn Monroe). That said we don’t know much about him other than his predilection for booze and young ladies at this stage in his life, his fading persona a mottled shell of the man he once was, the famed Robin Hood of the late 1930s.

It would have been nice to see more of his aggravating side, a glimpse of the man someone like Bette Davis vehemently and publicly loathed. But Kline has a rather charming affect and while his sexual chemistry with Fanning is wholly absent, his mannered performance tends to distract from the tawdry situation. Still this is the best feature Kline’s been part of in quite some time, especially compared to claptrap like Darling Companion or Last Vegas.

Fanning does alright as Beverly Aadland, though she never quite seems to be the passionate young girl in love that the end credits would have us believe her to be. The film’s dedication to her and her reluctance to ever speak publicly on the relationship proves the directors’ wishes to tread lightly, which is exactly what seems a bit off about this reenactment. Yet Sarandon as the one-legged stage mother clearly looking the other way is something rather special here, a woman that would spend 60 days in jail, lose custody of her daughter, then write her own dubious account of the affair, upon which the film is based. It’s her intriguing role that steals the show.

A more flamboyant production would have really let Florence Aadland stand out, for it is her complicity that sets this tale apart from many similar scenarios. It’s exactly the type of role that also proves the problem of casting Sarandon as a dowdy grandma (as she is in Tammy), here playing another wildly perverse mother of a young girl, something Sarandon’s been perfecting since Louis Malle’s Pretty Baby (1978). Her performance also recalls her recent turn as Doris Duke in 2006’s Bernard and Doris.

There are some delightfully surreal details to all of this that just seem too good to be true, such as Flynn’s meeting with Kubrick (Max Casella’s impersonation of the director has to be one of the most unfortunate yet) concerning playing Humbert Humbert in the famed adaptation of Lolita. Flynn insisted that he’d only play the role if Beverly starred as the titular nymphet, which Kubrick balked at. It’s too bad he did considering the perverse layers of weirdness this would have created, especially since the actress that would eventually play her, Sue Lyons, was probably about as equally enigmatic as the unenthused Aadland (Lolita, made several years after Flynn’s death, would star James Mason, whose Norman Maine character in A Star is Born seems more of Kline’s inspiration here).

Fans of Hollywood’s studio era should definitely take an interest in this tale that should leave us with more mixed feelings than it eventually does, playfully lilting us along with the repeated strums of Carmen.