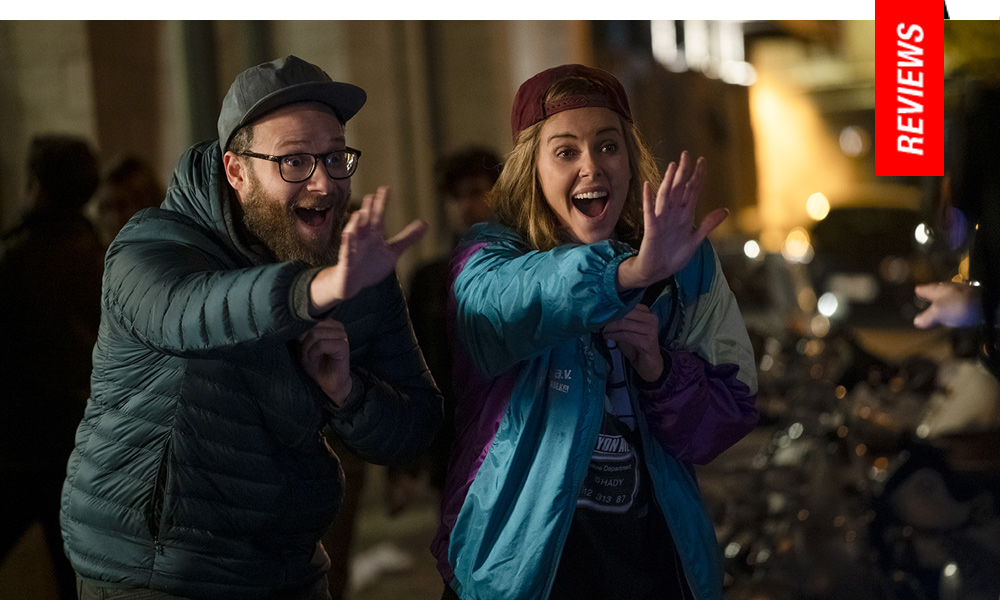 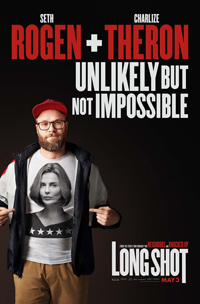 While it arguably doesn’t go for broke and can’t quite shake the well-grooved predictability of its age-old formula, there’s much to admire and appreciate in Jonathan Levine’s (2013’s Warm Bodies, 2017’s Snatched (review) biggest gamble to date with the aptly named Long Shot. Surfing in on its concept of trenchant unlikelihood, beginning with the pairing of its ‘mismatched’ leads and land-mine of topical political subtexts, a disarming script from Liz Hannah (The Post, 2017) and Dan Sterling (“Girls”) is a smartly retrofitted portrait of the underdog.

Provocative without being salacious and satirical without being cynical, delightful chemistry between Charlize Theron and Seth Rogen allows for an escapism which has been absent from this sort of scenario for decades. Levine manages a difficult balance between sentimentality and endearment, which is only enhanced by its dog-eared, rough-around-the-edges charm. While the script’s attempts to bridge or address trenchant racial divisions within the context of its universe wobble between terse truths and awkwardly inauthentic exchanges, it’s a film of many surprising depths which are richly entertaining and joyously heartfelt as it argues compassionately for the need to progress to a realm of positivity, openness and authenticity in both our private and public personas.

Compared to the current woeful state of affairs in the American political landscape, this plays like some upbeat parallel universe depicting the final gasp of heteronormative power plays, its vestiges of white male reign evidenced by the impotence of the celebrity obsessed sitting president, played by a rather energetic Bob Odenkirk (whose characterization seems to blend elements of Reagan, the Bush men and number 45). We’re ushered quickly into the dramatic thrust of the narrative, with Theron’s sweet, composed Madame Secretary Charlotte Field making plans to announce her 2020 presidential run on the heels of an ambitious environmental bill she plans to assemble just as she inexplicably reunites with Seth Rogen’s volatile, self-consumed journalist Fred Flarsky, who she babysat in her teens. He’s been in love with her since sharing a transformative experience during these years and she seems to harbor similar sentiments. As the title indicates, the possibility and eventual success of their union isn’t logical (and, conversely, extends to her hopes to secure the Democratic bid for the presidency since Charlotte is reluctant to sell-out in order to receive the necessary endorsements history dictates she would need).

And this is basically the structure of Long Shot, a romantic comedy about an unlikely couple with the odds perilously stacked against them while the background has all the zany elements of a screwball comedy. But rather than a Howards Hawksian element, Levine presents this with all the winning sentiment of Frank Capra’s golden era of filmmaking, and this is exactly the kind of contemporary successor to classics such as Mr. Deeds Goes to Town (1936), or, more likely, Mr. Smith Goes to Washington (1939), wherein politically and socially minded men defined by their winning naiveté are able to transform corrupt classist systems. Sure, Levine’s film is as pure fantasy as Capra’s films were eighty years ago, but it creates a spirit of wanting to entertain hope and possibility, both for a woman president and the likelihood of two people taking a chance on their connection instead of deciding whether or not cultural parameters should dictate their tastes and desires. Would that would it were so simple.

Supporting players, however, are a bit straightjacketed into limited parameters. Transcending some of these constraints is June Diane Raphael as Theron’s right-hand, a performer who’s developed her own signature brand of withering line-delivery (her husband Paul Scheer appears as a misogynist pundit in the film’s Fox News parody of Wembley entertainment, owned by Andy Serkis’ as an unconscionable magnate, who disappears inside another prosthetically enhanced creation). And then there’s an oddly off-putting Alexander Skarsgård as the Canadian Prime Minister in a performance which is utilized for an interesting examination of cultural stereotypes.

Where Long Shot suffers most (besides its pandering deference to current popular entertainment markers such as “Game of Thrones” and the Marvel universe—disappointing considering the conversely joyous and retro cherry-picked soundtrack references) is with its presentation of people of color. Speckled with appearances by three of the Boyz II Men members and Lil Yachty (all appearing as themselves), the film skirts around really examining its world of white privilege. If Rav Patel falls to the wayside, O’ Shea Jackson Jr. (who portrayed his father Ice Cube in 2015’s Straight Outta Compton) is never allowed to be more than a mouth piece for various soap box tangents, and always as a reflection for the betterment of Rogen’s character (his only real line of dialogue with any significant subtext parallels Flarsky with Taylor Swift, citing their whiteness allows them to be ‘without a care in the world,’ and casts a long shadow over the journalist’s convenient ability to simply resign from his position without any real worry on how he’ll afford to live in his decently sized Brooklyn apartment).

Despite these issues, Long Shot is often mirthful and always sweet, buoyed by Theron and Rogen, who dismiss any such notions of their incompatibility. What they manage to convey in sequences which are more often than not rote or gratuitous (including a funny yet touching sex scene and a drug-induced clubbing scene in Paris which sets up one of Theron’s shining moments of the film) amounts to priceless cinematic chemistry, and there’s a magic here which feels vibrant and addictive.