Out in the Moonlight, Just Like We Used to Do: Smith’s Throbbing, Eerie Debut 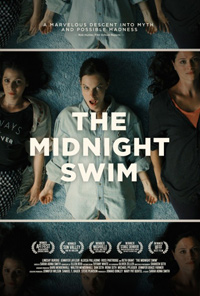 The unnerving quality of Sarah Adina Smith’s directorial debut, The Midnight Swim, occurs mostly in its aftereffects, leaving us with the profound, less earthbound implications in its final few moments. While it’s eventually revealed to be more of an existential exercise, which may tend to disappoint some since it’s cloaked in the entrails of genre, this is an intriguing debut that uses familiar tropes with a bit more innovation than other fare similarly dressed.

Three half siblings venture to a remote cabin of their youth located on Spirit Lake, a body of water so deep that no one has ever found the bottom of it. But their ecologist mother, Amelia (Beth Grant) appears to have gone diving one night, never to return. The sisters have reunited to figure out what to do next, whether to sell the cabin, etc.

Annie (Jennifer Lafleur) and Isa (Aleksa Palladino) reminisce about mom while June (Lindsay Burdge) stays mostly off camera, filming them for her documentary project. Next door the sisters discover Josh (Ross Partridge), a man whom Annie used to have a significant crush on. The four people bond, share stories from the past, and talk turns to a bit of mythology about a group of seven sisters from a century prior who drowned in Spirit Lake, one at a time, as they each tried to save their previously endangered sibling. It’s the mythology that relates to the constellation, Pleiades, and though all sources acknowledge a seventh star, only six can be seen with the naked eye. Of course, eerie things about this legend appear to relate to the strange disappearance of their mother, who may have been involved in some bizarre research about the body of water that she was so desperate to save.

While a majority of The Midnight Swim is comprised of material that would classify it as (at least partially) a found footage exercise, Smith isn’t using the technique as a mere approach. Rather, the camera is an extension of the lead protagonist, June, a character crafted almost exclusively off screen, which creates a distancing effect between her and us and also allows her to control most of what’s being shown. The more we come to find out about June, the more unnerving her actions seem.

The cast is uniformly unassuming, with Lindsay Burdge of Hannah Fidell’s A Teacher once more playing a complicated lead. Jennifer Lafleur and Ross Partridge of Baghead are reunited here, and Lafleur’s striking similarity to actress Aleksa Palladino as the third sister seems an intertextual flourish in this tale fascinated with a legend about an invisible sister.

Smith has a keen sense for divulging just enough information to cause a general unsettling, such as when the sisters and the tagalong neighbor reenact memories of their mother, with one of them inadvertently acting out a moment of abuse. Without giving too much away, the urban legend central to the happenings of the film works on multiple levels. There’s something literal and obvious, of course, and that may disappoint some as it creates a certain inevitability. But after the credits roll, the rather standard and even annoying insistence of June’s handheld camera, which relates a majority of the tale, reveals its more subtle uses.

Central to the motif of seeing and remembering, past lives and the unification of all lives, the purpose of film and the motivations of those who make them resonates in different ways. June is a complicated character, a bundle of bad decisions has debilitated her and she has no interest in being in front of the camera, of having her actions observed and documented. Yet, she’s looking for a new way to see, a new way to consume the world around her—and perhaps it’s this drive that signifies one’s preparedness for what comes next.

If there are any major complaints with The Midnight Swim, a diverting escape into a musical lip-synch with the three siblings seems to come from nowhere and isn’t quite addressed again. A break in tension that serves to highlight the rather forced camaraderie of three increasingly estranged people, it’s a bit jarring in relation the rest of the film’s rhythm.

Reviewed on July 27 at the 2014 Fantasia Film Festival.