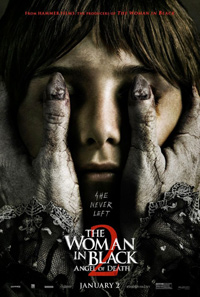 Director James Watkins scored a sleeper hit with his 2012 sophomore film, The Woman in Black, a UK period piece horror film concerning a nasty spirit stealing village children for her own very personal reasons. Moody ambience, a distinct creepy curio motif, and headlined by the dependable likes of Daniel Radcliffe, Ciaran Hinds and Janet McTeer (the film receiving release around the time her Oscar nod for Albert Nobbs was announced), it was surprisingly adept in comparison to the usual effort administered in such derivative genre fare (though it isn’t nearly as taut as Watkins’s 2008 debut film, Eden Lake). And so, without further ado, a sequel was born (to be fair, this is the first sequel from Hammer Productions since 1974), this time directed by Tom Harper and sans any original cast members for The Woman in Black 2: Angel of Death.

That surly lady spirit is still haunting the moors of Eel Marsh House, about to receive its first residents about forty years since the first film. In 1941 London, orphanage caretakers Eve Parkins (Phoebe Fox) and Jean Hogg (Helen McCrory) decide to move their wards out of the continuously bombed city to the British countryside, a move that has other institutions following suit. Once there, the impressionable Ms. Parkins becomes immediately unnerved at the dilapidated mansion, though the curt Dr. Rhodes (Adrian Rawlins) assures them there is absolutely nowhere else to go. But at the train station, Ms. Parkins attracted the attention of a handsome young pilot, Harry Burnstow (Jeremy Irvine), who shows up to pay frequent visits on the isolated estate, much to the chagrin of Ms. Hogg. When a boy mysteriously dies in the middle of the night, the children begin to become uneasy, particularly a young mute orphan, Edward (Oaklee Pendergast), whom Ms. Perkins believes to be communicating with the malevolent presence she keeps glimpsing out of the corner of her eyes.

Director Tom Harper has a rather unique filmography, working significantly in television (with a film version of popular children’s lit like The Borrowers, as well as episodes of the series “Peaky Blinders” and a mini-series version of “War & Peace” on the way), along with a pair of independent features under his belt.

Phoebe Fox starred in his 2014 release, War Book, while noted actress Helen McRory worked with him on “Peaky,” and should be recognizable for her presence in “Penny Dreadful,” and a host of supporting roles in major film productions (including The Queen, Skyfall, and Hugo). But the only bit of life breathed into this endeavor happens to be the prickly McRory, though her antagonism is eventually thwarted by the dire banality of Jon Croker’s sleepwalking script. You might be startled once or twice while watching Angel of Death, but the thrills are cheap tricks, the kind where birds fly amusingly at windows, dreadfuls things appear on cue whenever we focus intently on inert objects, hands come out of gaping holes throughout the sagging infrastructure, and, you can predict how that creepy blind man with glaucoma glazed eyes and Gollum stoop will eventually be used.

Relative newcomer Phoebe Fox, who looks an awful lot like American actress Lindsay Sloane, is saddled with the unfortunate dearth of non-sequitur scares and clichéd character tropes (there’s a distinct reason she’s chosen to work and stay inordinately cheery while employed at a WWII era orphanage), and the romantic inclinations with the generally unimpressive Jeremy Irvine never amounts to much effect other than to tease the tale into its inevitable, predictable finale.

Harper valiantly tries to include the eeriness of those strange toys so prevalent in the first film, but it seems nearly an afterthought. Still, DoP George Steel manages a unique shot or two, including one striking frame where Fox’s Eve is aligned in profile with a mangled tree, its branches and her tightly wound hair pulled taught, reaching backwards, juxtaposed as similar figures in a desolate landscape.