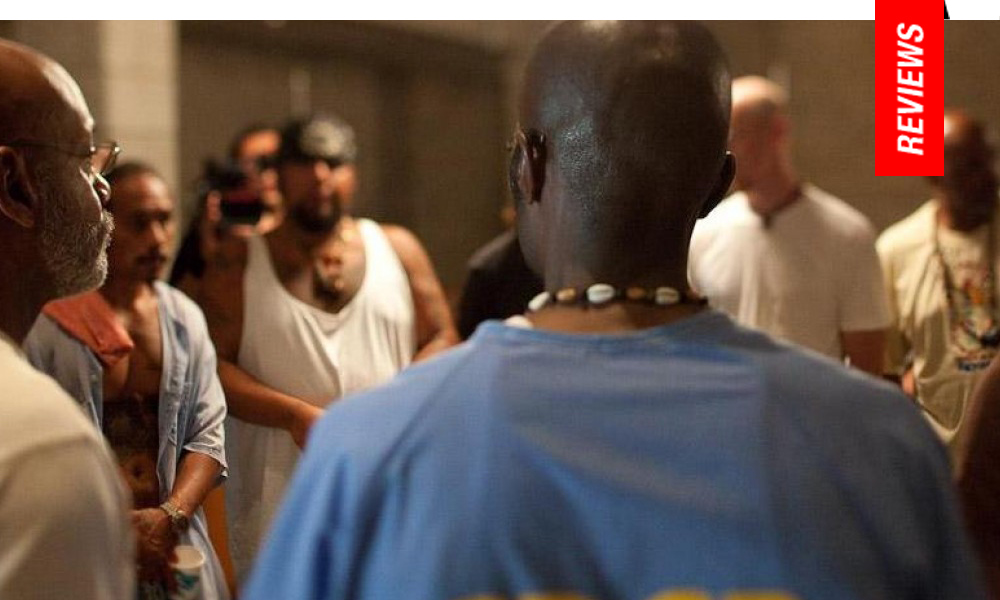 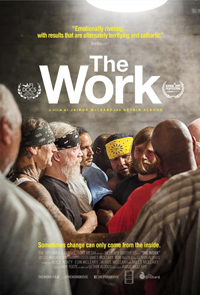 The barbed wire and prison walls of Folsom soar over inmates and visitors with a baleful presence, seemingly extending its always-present distance from the outside world. Aided by co-director Gethin Aldous, first time documentarian Jairus McLeary does one better than the most famous non-inmate in Johnny Cash with what pans out to be a raw and visceral observational docu inside this maximum security prison–industrial complex bliss. Bypassing individual narratives or numbers and figures of census data, the tandem place their highly relatable subjects under a microscope, exposing vulnerable veins of the human condition in an utterly hostile environment and though it goes by the rather simplistic moniker of The Work, what we have here under lock and key is a  devastating and heart-wrenching group think essay.

Stepping off a bus into the blistering California sun, McLeary and Aldous follow three men (Brian, Charles and Chris) taking a rare opportunity for those on the outside to participate in a four-day intensive group therapy program confronting personal challenges of rehabilitation with Folsom inmates. There are brief occurrences where the camera follows these subjects outside of the prison as they return to their motel each night, inquiring on their impressions, though the film largely remains locked in one room. During each session, all participants seek to break down their self-constructed walls and look for the sources for their pain and anger, attempting to right literal and existential wrongs. From discussing fatherless homes, how their rashness has effectively destroyed lives, to a tear-gushing stare-down where one of the inmates attempt to bargain against another’s suicidal ideations; each topic covered can be easily empathetically embraced. All saved for a direct statement at its end to the program’s stunning efficacy, The Work comes sans narration, organically checklists the activities and discussions in sequential order.

The connectivity with these subjects hinges on three main elements. Cinematographers of Arturo Santamaria and Mathew Rudenberg offer a stark contrast in each of the nuanced discussions, confrontations, and discoveries. John Davis’ sound design heightens every subject’s journey and accompanying sob, scream, fit and whisper are remarkably clear and well-mixed, while Amy Foote’s editing allows for numerous levels of simultaneous intensity to flow as if a musical progression; ironic considering there isn’t a score. Each harrowing perspective is made concrete by using only the in-session material.

There might be no place for resolve, but as the subjects confront their innermost demons and shortcomings, the therapists plainly inferring the necessity for more therapy of this kind. As every subject is given equal screen time weight in their moving day-to-day activities and challenges, the final statement in the film becomes the title, that this work is tremendously invaluable and conceivably ongoing.

Not having ongoing access to the subjects perhaps limits the narrowness of the scope, but despite those gaps, McLeary does wonders in the economical 90 minute runtime and it makes for a rather concise, almost scripted drama. Harshly honest, visually engrossing, The Work will challenge auds much in the same manner the film’s subject wrestle with their inner demons.