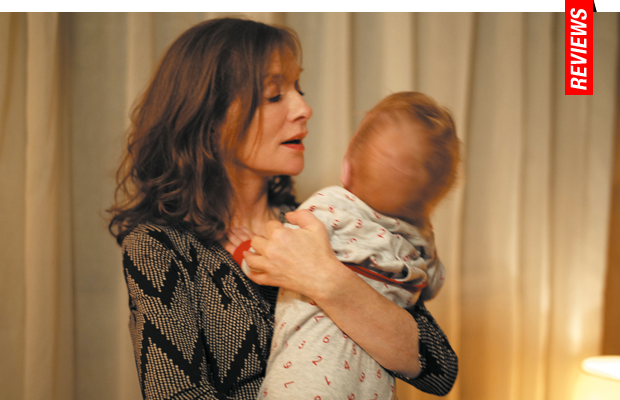 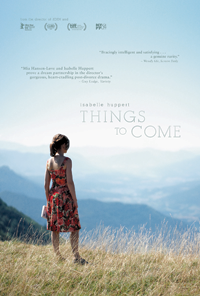 Director Mia Hansen-Løve breathes majestic layers of complexity into her fifth feature, Things to Come, documenting the post-divorce anguish a woman faces in the wake of her husband’s infidelity and other personal and professional woes. Though the scenario is certainly nothing new to cinema, rarely has so simple, familiar examination seemed as compelling as it is authentic, especially as laid out across a particularly academic landscape. Of course, Hansen-Løve receives mighty assistance from the inimitable Isabelle Huppert in a role outfitted for the performer’s notable range, guiding us through a grieving process free of sensational melodrama. Fans of the actress will revel in her astute portrayal of an intellectual woman whose life is suddenly, irreparably upended in a period of life when the opposite is expected.

High school philosophy professor Nathalie (Huppert) lives a comfortable existence, having raised two children to adulthood with her husband of twenty-five years, Heinz (Andre Marcon), who teaches alongside her at the same facility. Lately, Nathalie’s mother (Edith Scob) has been exhibiting problematic emotional outbursts which could possibly require her to be admitted to a nursing home. Meanwhile, an ex-student (Roman Kolinka) reconnects with her just as troubling hiccups arise regarding the layout of an annual essay collection she oversees. When Heinz announces he’s leaving her for another woman, Nathalie is suddenly faced with a triptych of torments she must navigate on her own.

The French language title, L’avenir (translating as The Future) was meant as a cruel joke regarding Natalie, a woman forced to reinvent herself even though there’s little left of her future as an independent, active woman. The scenario is familiar, not unlike several recent US properties showcasing similar scenarios (Netflix’s series “Grace and Frankie” comes to mind—fleetingly) and one only has to gloss over the body of work produced by Nancy Meyers to see how American versions of women like Nathalie are hyperbolized and straightjacketed into a crowd friendly finale.

Hansen-Løve instead shows a complete portrait of a complacent woman who finds her greatest pleasure in her professional endeavors, an arena which also unspools before her eyes (one wishes a character like Roman Kolinka’s would have brazenly dared to criticize Meryl Streep’s petty bourgeois existence in the midst of her romantic troubles in 2009’s It’s Complicated). Huppert, whose name is usually synonymous with provocative auteur fare, increasingly as an icy canvas of repressed emotions, or a perverse madam of taboo proclivities, is a graceful composite of an astute intellectual doing her best not to come undone.

With a teary flick of the eyes, or a hardened, melancholy gaze out the window, Huppert commands a myriad of complex, fluctuating emotions, often shifting effortlessly within a single take. As the film comes to depend on more obvious metaphors, such as the pesky black cat Pandora she inherits from her irksome mother, the imperceptible groundwork of characterization sometimes gets lost in narrative elements more easily defined as obvious. However, Hansen-Love manages to steer clear of pat resolutions.

Things to Come could have easily shared a title with one of Hansen-Løve’s early works, like Eden, Goodbye First Love, or her sterling, sophomore film The Father of My Children in 2009, which this film is most similar in tone as far as a command of wisdom and maturity beyond the director’s years. A hyper intellectual landscape of philosophical references unspool throughout the film, but with natural ease and not pretense (and included are some withering jests played off of names like Hannah Arendt and Arthur Schopenhauer).

Hansen-Løve peppers the film with classical music and several well-placed tracks, including a Woody Guthrie tune, and a superb cover of “Unchained Melody” which sails the film into a divine send-off. Scenes featuring Edith Scob as Huppert’s emotionally troubled mother ring unpleasantly true, laced with a thick, dark humor, while Kolinka and Andre Marcon are laudable supporting players. But at its triumphant core, Things to Come is an exquisite vehicle for the incomparable Isabelle Huppert, a performer who is the heartbeat of every sequence within the film.