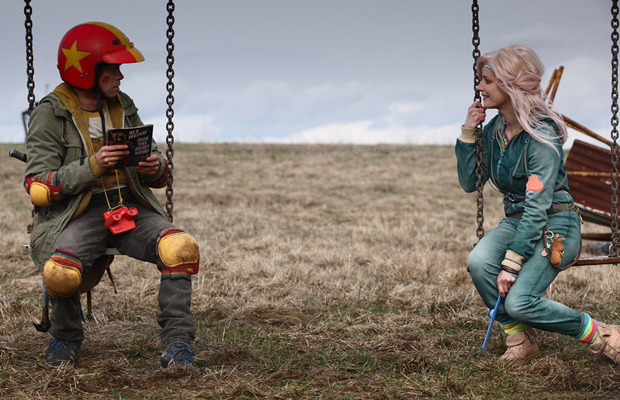 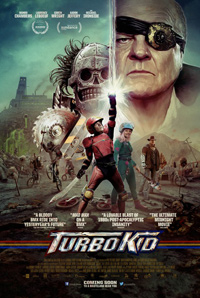 Operating comfortably within the lines of the well-tread grooves of genre paths explored before than it does reinvent the parameters of its retro engaged flavoring, the surprisingly endearing Turbo Kid manages to engage as heartfelt pastiche. Co-directed by Francois Simard, Anouk Whissell (who also star as the father and mother of the main character) and Yoann-Karl Whissell, the gonzo mash-up of exaggerated, bloody violence with the charming earnestness of its protagonists plays surprisingly well even if its narrative trajectory lacks enough remarkable characteristics to differentiate itself from certain films it pays homage to. At times enchanting, particularly with a handful of colorfully detailed character developments, it’s a romantically inclined love letter to a more inventive and playful era of filmmaking sorely missed.

In the post-apocalyptic world of 1997 Quebec, a loner known as The Kid (Munro Chambers) lives alone in a wasteland decimated by acid rain. He scavenges for old goods he can exchange for increasingly rare fresh water with items like the Rubik’s cube or the hearty survivor of the environment, the View Master. The water supply is controlled by the zealous ruler of the land, Zeus (Michael Ironside), a nasty tyrant who revels in butchering people in sadistic gladiatorial-like games. A run in with the rebellious Frederick the Arm-Wrestler (Aaron Jeffrey) eventually involves the isolated Kid and his newfound friend, the indefatigably chipper Apple (Laurence Labeouf).

In many ways, this post apocalyptic universe plays an awful lot like a backstory for Mad Max’s scrappy, big-hearted little brother. The unnamed protagonist shares much in common with the Australian genre icon, lost in the wasteland without his loved ones, sporadically chased, though the souped up grunge of George Miller’s automobiles are replaced by nicely edited bike sequences (which sort of recalls another 80s Australian classic, BMX Bandits). Though filmed in the wet climes of Quebec, instigating the notion of acid rain over nuclear fallout or global warming, the film was a co-production with New Zealand, perhaps explaining its particular flavor (enhanced by Kiwi actor Aaron Jeffrey as Frederic).

But in spirit, the central and gently conveyed romance between its heterosexual protagonists feels a bit more like the sweet-toothed notes of something like The Princess Bride dumped into a Paul Verhoeven version of a post-apocalyptic 1997. The presence of genre star Michael Ironside, here donning another villainous persona, provides a reminiscent tinge of a variety of classic sci-fi, from Scanners (1981) to Total Recall (1990).

Relative newcomer Munro Chambers manages to strike the right chords of awkward teen coming into his own as he inherits the superpower abilities of his own beloved comic book action hero, Turbo Man. If at first Laurence Laboeuf seems a bit over the top as Apple (a sly dig at Gwyneth Paltrow or a nod to the corporation?), it’s eventually revealed she has good reason to, and she eventually becomes a delectable onscreen match for Munro.

The directors reunite with DoP Jean-Philippe Bernier from their 2011 short “T is for Turbo,” a segment originally submitted for The ABCs of Death anthology. Together, they create a strikingly unique look for their wet and green ooze of wasteland. Ironside’s Zeus engages in the customary end-of-the-world era marathons of savagery we’ve seen elsewhere, but gets an original and disturbing machine of his own known as the Juicer, which enhances a witty Soylent Green moment (plus there’s an also a very disturbing sequence involving a character’s intestines). Mixing a zealous ludicrousness with a sincere love of 80s artifacts, Turbo Kid, which premiered at the 2015 Sundance Film Festival, is fun and charismatic.