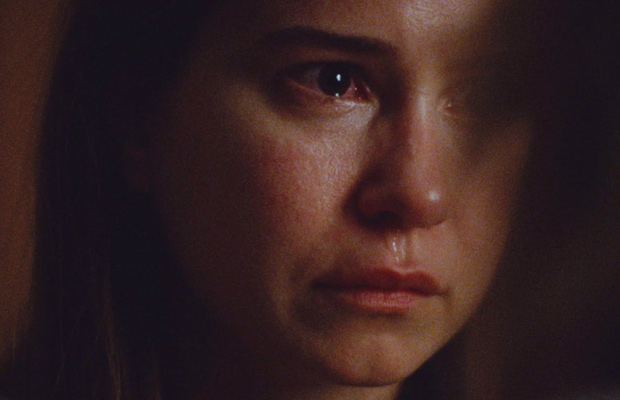 Earth Below Us: Perry’s Esoteric Puzzle of Women and Madness 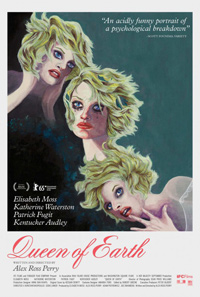 What a delight to see director Alex Ross Perry continuing his delightful examinations of unlikeable characters with his latest feature, Queen of Earth. Abandoning the black comedy undertones of the pretentious, literary minded male psyches of Listen Up Philip, Perry sets his sights on the female of the species with a delectable psychodrama chamber piece.

Perhaps even more staunchly misanthropic than his previous features, a grueling struggle for dominance amongst its central characters recalls the barbed early period of Polanski, while its dueling female centerpieces juxtaposed across time periods equally generates a likeness to the granddaddy identity chaos of them all, Ingmar Bergman’s Persona (1966). And yet, Perry’s unsettling and uncomfortable title stands on its own two feet as a wholly original treatment.

Catherine (Elisabeth Moss) arrives at her friend Virginia’s (Katherine Waterston) isolated summer cabin under self-imposed exile. Emotionally unstable, she’s recently suffered through the death of her father, a notable artist, and a break-up with her boyfriend James (Kentucker Audley). Flashbacks from the summer prior finds Catherine in tip-top shape, having invited James along for vacation at the cabin, though Virginia seems hardly pleased he’s come along. During that earlier period, the unhappy Virginia, having recently gone through her own tragic incident, begins a sexually charged liaison with Rich (Patrick Fugit), who resides in a cabin nearby. Now, a year later, the sore feelings between the two friends have been reopened, though now the women have been dealt a certain reversal of fortune.

The comparison to Bergman is more in a superficial sense. Perry brings a sly situational dimension to a scenario he treats like a veritable psychological case study, bitchy interactions packed with hints and allusions to hardwired notions concerning gender roles and roleplaying. We’re introduced to the ‘female space’ once established between Catherine and Virginia as being already compromised by unwelcome masculine energy in both time periods.

The sunnier yet equally fraught earlier period, revisited unannounced and frequently, holds many of the answers brought about by our questions of the troubling present, heralded by the composed demeanor of Moss and Sean Price Williams’ less claustrophobic framing. Fate having twisted their predicaments, the increasingly deranged Moss is framed often in extreme close-up in the present, the color palette seems clouded over while the persistently wary Waterston seems unchanged—wary, watchful, and prone to insistently manipulative moments. Their interactions range from thoughtful and caring to the adoption of masculine pissing contest tendencies when men factor into the situation and muddy the water.

The earlier sequences seem to prove only that the best friends have drifted hopelessly apart, yet Queen of Earth could have easily been called Her Vice is a Locked Room and Only She Has the Key, except instead of a locked up body rotting away nearby, the stinking carcass is the remnant of their decomposing friendship. Large swaths of dialogue hint at the larger issues going on under the surface. Their acknowledged inability of escaping one’s own cycle of self-defeat involves sharing memories of toxic relationships with men. Of course, this relates to their withering co-dependence on one another, as well.

Perry includes playful visual hints of deeper meaning, such as Waterston’s Virginia notably reading Phyllis Chesler’s landmark 1972 feminist manifesto Women and Madness, a text which Perry seems to have crafted Queen of Earth around. Chesler, who deliberates the double standards of mental health and illness in relation to women in society and as depicted in literature asserts “two women talking often seem to be reciting monologues at each other, never really listening to (or judging) what the other is saying.” And as far as women in groups are concerned, Chesler likewise claims these relationships between women in heterosexual contexts are only “temporarily and superficially with other women.” Not that Chester’s text holds the ultimate answer to Perry’s sometimes puzzling depiction of a haywire friendship, but he’s certainly conveying these points, whereby two women are torn asunder by their conditioning to prize relationships with men over friendship with one another.

Clearly, both of them are strikingly intelligent and beautiful women, and yet let themselves and their emotions be defined by the actions of men, to the degree this becomes a delightfully twisted take on emotional vengeance and sabotage.

Perry’s own literary mindedness stretches to the formulation of his characters—in the realm of famed women rebelling against pervasive patriarchy, the name Virginia easily puts one in mind of Virginia Woolf, while Catherine and a character’s insistence on calling her Kate even though her name is spelled with a C, seems an allusion to Shakespeare’s The Taming of the Shrew.

Queen of Earth, which perhaps refers to each woman’s own selfish perspective, is a brooding psychological drama, in the grand tradition of classic titles prizing ambience and essence over concrete explanations, like Altman’s 3 Women (1977) or Images (1972), and classic psychotic cinema like De Palma’s Sisters (1973) and Polanski’s Repulsion (1965). Again, Perry gives Elisabeth Moss a choice role, allowing this underrated performer a stunning canvas to work with. She runs through an impressive gamut of emotional upheaval, from euphoric blindness to unhinged madness. You’ll look far and wide to find someone that betters her bitter, venomous, and deliciously withering diatribe in a late staged sequence in the perversely entertaining Queen of Earth.