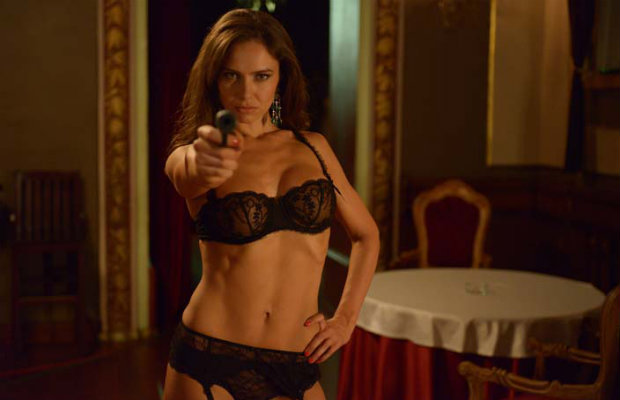 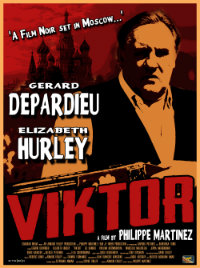 While there’s certainly a modicum of perverse interest to be satisfied in witnessing the rotund Gerard Depardieu as an ex-con exacting vengeance on a gang of Russian hoods in the type of watered down B-action flick that’s about as originally conceived as the already derivative Liam Neeson franchise Taken (or Pierce Brosnan’s The November Man), Philip Martinez’s Viktor is neither of significant quality nor campy enough to justify its bizarre existence. Depardieu’s well-publicized tax inclined emigration from France to Russia may explain some of how this nonsense came into existence, but Martinez’s workmanlike march through a series of unenthusiastic events makes it seem as if everything was filmed in one, hurried take.

Released from prison after a seven year sentence for stealing a high profile piece of art landed him there, Viktor Lambert (Gerard Depardieu) returns to Moscow to uncover the conspiracy behind the murder of his son, who has left behind a pregnant girlfriend. It seems his kid had gotten involved with some shady mobsters into hustling diamonds. With the assistance of his former partner, Souliman (Eli Danker), who has left the life of crime to become a famous ballet choreographer, Viktor also reconnects with old flame Alexandra (Elizabeth Hurley), a woman of British and Russian descent who runs a swanky nightclub. Making it known that he’s out for blood, the men Viktor seeks conspire to track down the son’s pregnant girlfriend in order to control the situation.

With this, his fourth directorial feature, Martinez seems content with his trend of netting once vibrant action stars or marquee names to headline his choppy material, hiring Armand Assante, Jean-Claude Van Damme, and Val Kilmer in his previous films. Outside of his English language work, Depardieu still retains an admirable stronghold on notable projects with bonafide auteurs, so the decision to appear as the titular art thief who reconnects with an old flame, saves his unborn grandson, and exacts vengeance for the murder of his son seems perhaps a whimsical experiment on his part. As his love interest, Elizabeth Hurley, who looks more and more like Jacqueline Bissett, generates the most tension because we’re waiting expectantly to see just how far Martinez pushes the sexual chemistry, which isn’t very far since all sexual acts between the two taking place off screen but are directly referenced so that, for the audience’s benefit, we know they still engaged in expected procedure.

Martinez employs this tactic in other instances, such as when an inferior reports to the mob boss about some bodies that have been appropriately disposed of. “Good, I don’t want the police to know I killed my lawyer,” is the response, a bit of stilted pipe-laying that languishes throughout most of the Russian characters’ dialogues when they’re forced to speak almost entirely in English (one of whom is well known Russian actor Aleksey Petrenko, who starred as Rasputin in Klemov’s 1981 Agony (1981), here a grand pimp that rules over Moscow’s sex trade). One wonders why Martinez wanted his film, which looks technically astute in the hands of DoP Jean-Francois Hensgens (who veers between Euro schlock like this and the District 13 sequel when not employed by the likes of Joachim Lafosse), to sound so ludicrously cheap.