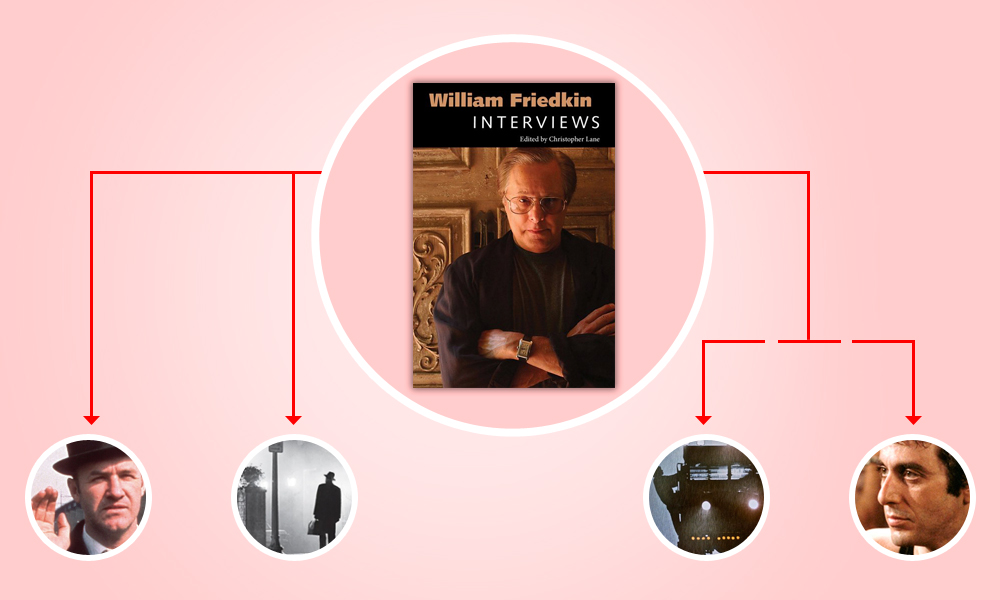 For its Film Studies series, the University Press of Mississippi has provided a volume of interviews curated to reflect the influences and accomplishments of director William Friedkin. Edited by Christopher Lane, a film and television writer, director, producer, educator and lecturer, the collection includes fifteen articles, interviews and seminars meant to encompass themes from six decades of his career, from 1962 to 2017. Although these pieces each take a painstaking glimpse at Friedkin’s beginnings in television in Chicago, which enabled him to direct his 1962 television documentary The People vs. Paul Cramp, the series really begins with interviews from 1974, after the two films which would cement his status as an American iconoclast of the Directors era, 1971’s The French Connection and 1973’s The Exorcist.

Perhaps not surprisingly, most of the interviewers whose interactions with Friedkin were curated for this collection focus intensely on The French Connection and The Exorcist. There’s much to be gleaned in revisiting these selections for aficionados of these two seminal films, particularly how Friedkin shot his famous car chase sequence in The French Connection (which he edited while listening to “Black Magic Woman” to create its rhythm) as well as his casting process (Friedkin was vehemently opposed to Gene Hackman, the last choice for the production).

Various logistical components of how The Exorcist was put together, including the casting of Linda Blair and the creation of the Pazuzu’s voice are also of note. Friedkin’s output previous to his Best Picture win for The French Connection are either mentioned in disparaging terms (such as his 1967 debut Good Times) or as stepping stones, with the director admitting his disappointment in assembling 1970’s The Birthday Party, scripted by Harold Pinter, and divorcing himself from The Night They Raided Minsky’s (1970), which he saw as an opportunity to work with a studio.

His seminal The Boys in the Band (1970) is oft-referenced as his first artistic achievement, influenced by Friedkin’s interest in cubist art. The failure of Sorcerer (1977), which Friedkin considers his masterpiece, and the eventual cult appreciation and critical recuperation of Cruising are landmarks highly referenced in this collection.

Friedkin’s sentiments are often repeated throughout these interviews and seminars, including his own particular references, which includes Henri-Georges Clouzet’s Diabolique (1955) and, of course, The Wages of Fear (1953), the inspiration for Sorcerer. A fascination with Antonioni, Kurosawa, Fellini, Bunuel, Dreyer and even a dash of Hitchcock are also part of his dialogues. Of particular interest are some of Friedkin’s casual remarks from 1975 about the noted critics of the 1970s, including Pauline Kael, Rex Reed, Andrew Sarris (“Well, I don’t respect Sarris.”) and Charles Champlin.

For those looking for insight on some of Friedkin’s more recent or lesser known items in his filmography, Lane’s collection may disappoint. Titles such as The Brink’s Job (1978) and Rampage (1987) are lovingly recalled, though the latter in merely a reference. His 1985 classic To Live and Die in L.A. is also only a reference by the interviews, which skip over his entire 1980s period (jumping from 1979 to 1990).

Resurrection of Cruising and The Exorcist take precedence over his Tracy Letts adaptations like Bug (2006) and 2011’s Killer Joe (read review), but his 1997 television version of 12 Angry Men gets a dedicated piece, as does 2003’s The Hunted (his other Tommy Lee Jones title, 2000’s The Rules of Engagement isn’t featured). Left entirely in the cold is 1990’s The Guardian with barely an acknowledgment, and without any mention whatsoever are his 1983 dark comedy Deal of the Century (where film stars Sigourney Weaver and Chevy Chase didn’t get along) and his 1994 Nick Nolte sports drama Blue Chips (the debut of Shaquille O’Neill), both poorly received but featuring narratives or performances worthy of at least deliberation (especially considering Friedkin mentions Nick Nolte in early interviews).

William Friedkin: Interviews is an enjoyable recapitulation of two of Friedkin’s most beloved films as well as two of his most contentious offerings. But for those who might hope to dig into those undiscovered gems from his B-side, or even the highlights which range from the sacred (To Live and Die in L.A.) to the profane (Jade, 1995), one will have to engage in their own curating.

Continue Reading
Advertisement
You may also like...
Related Topics:Bug, Cruising, Killer Joe, Sorcerer, The Birthday Party, The Boys in the Band, The Brink's Job, The Exorcist, The French Connection, The Night They Raided Minsky’s, To Live and Die in L.A., top-stories, William Friedkin