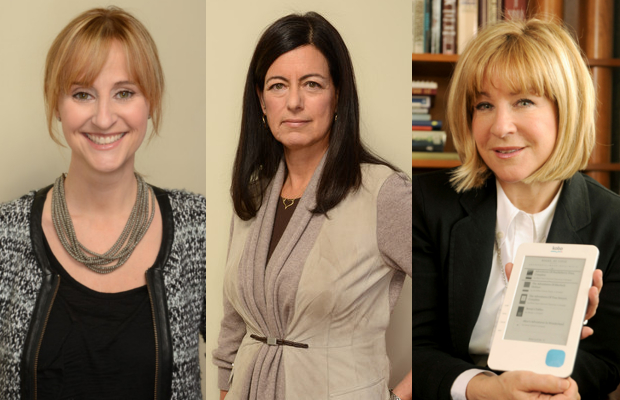 Stephanie Soechtig’s latest film had its premiere earlier this year in Park City where, amidst a host of other issue driven documentaries in the Sundance US Documentary Competition, it seemed to slide by without much fanfare. But make no mistake, Fed Up is a virtuous film that bears its heart, shows its teeth and makes its case that American politics and corporate greed has led to an epidemic of obesity with remarkable style and a wealth of credibility. While her debut, Tapped, incisively outlined the devastating global effects of the bottled water industry, here she takes on an even greater behemoth – the American processed food industry.

Such a task can not be done single handed, but somehow Soechtig has fandangled quite a team of producers together to help get the film off of the ground, including Laurie David (producer of An Inconvenient Truth) and Heather Reisman (founder and CEO of Canadian retail chain Indigo Books) who both serve as executive producers on the project. I had the opportunity to sit down with the trio at this year’s Hot Docs Film Festival in Toronto, just a week prior to the film’s RADiUS-TWC backed theatrical release on May 9th. Our conversation and film’s trailer follows:

Jordan M. Smith: You’ve got kind of a bizarrely all-star behind-the-scenes cast of people who’ve worked on this film. How did this happen? What was the catalyst?

Stephanie Soechtig: I was on Katie Couric’s show promoting my last film, Tapped, and we got to talking and I had said if you’d like to do a documentary film sometime please call me, and she actually did call mme and told me that she was mentoring this kids up in Harlem and wanted to look at these far reaching effects of this crisis. The clincher for her was that she’d been covering the story for 30 years and there were always these drips, right? A little blip here and a little blip there, and the problem was getting worse and worse. So, she said she really wanted to take a comprehensive look at all the factors that led us to this point, where one in three Americans is overweight or obese and would I dive in and look? As I did, I realized we had just scratched the surface. There were all these wonderful movies and books, but there was still a much larger story to tell. We said we needed a sort of An Inconvenient Truth moment. We needed to make a film for the food movement what An Inconvenient Truth did for the climate change movement and that’s when we reached out to Laurie David, who very quickly jumped on board, thankfully. And then Laurie brought in (gestures to Heather Reisman) to our circle, more wonderful women.

Laurie David: When you’re making a movie you really want the most passionate, smartest people around. It’s so hard to make a film and it takes so many resources and so much time and it takes a lot of passion. So, of course I brought Heather in because she’s #1 on my list. And here we are, 3 years later.

Smith: The film is really, really dense. There is so much information, countless video clips from news, TV, audio, political, etc. What was the research process for you?

Soechtig: You know, I’m such a nerd about those things. I’m a news nerd. So, once you start digging and reading and watching these clips, one leads to another and you think, is there something to that? It really is a web and one thing just leads you to another.

David: And I would just add that I don’t think you knew, and I know that I didn’t know and Katie didn’t know where the research was going to lead.

David: What we ended up with is what we all learned in the course of making this movie.

Soechtig: Yeah, I thought, I’m such a healthy eater, I know this story and as I started digging and realizing, oh, I didn’t know this. It unravels like a mystery story, a who done it of sorts. We have enough for a sequel there was so much we had to cut out, painstakingly.

David: We didn’t really know where the story would lead and it’s a surprise to all of us and that’s why I encourage everybody…. You know, I thought I knew a lot about food. I had already written a cookbook, I was writing my second cookbook and there is so much I learned in this movie.

Smith: Mark Monroe is involved and I found that completely fascinating, but it makes sense because it is so dense. What was the process like working with him?

Soechtig: Again, we had this dense film, I was 9 months pregnant, and we needed some help to weed things out. To tell the narrative of the children and then the policy stories and to interweave those was agonizing. I can not tell you for how long the film was bad before it became good. And Mark is very good at that. What he does is he asks you what your tent pole moments are. What are the things you have to have in the film? And that was a really great way to think of things so that we could identify…What can you live without? I can’t live without this story, this story, this story, and this story. And that’s how we were able to craft things around it.

Smith: The film feels very rhythmic despite it being so dense, which is really hard in a story like this where you move from, say, school lunches to the politics of the tobacco industry. It could feel very chaptorial, but it doesn’t feel that way. Was there anything specifically that you found in the editing as you were putting it together that allowed that to happen?

Soechtig: Music is really important to me. You know, I even find when I’m driving I’m mentally cutting scenes. Canada’s own Arcade Fire and The National were an inspiration for me during this. I find that that helps me get from one place to another, but a brilliant editor really does that. You do labor over it. What bite is going to get you from this to that. You’re exactly right. I didn’t want, suddenly, this chapter is about school lunch. And that’s how it is in real life. It all blends together. You know? An agricultural policy affects how our children eat.

Smith: How did you find the kids for the film? I found it very moving that these kids would be willing to be involved in the film even though it could be detrimental to their mental self image.

Soechtig: It’s really whole families, not just the kids, but it took about 8 months to cast the film. We went from just randomly calling schools asking if they had anyone in mind. We would call doctors offices, diabetes clinics, people who specialize in cases that do have patients that might be interested. I believe in the universe sort of providing and these were just the most gracious, courageous, open children that kept video diaries and documented their own stories for two years. And to be that candid at an age where you’re just so insecure was just such a gift, but we have hundreds of hours of footage from them.

Smith: I couldn’t tell if it was a video diary or if you were Skyping with them or something.

Soechtig: Yeah, they had Flip cameras and we went down and shot with them as well. I feel this idea of vérité filmmaking to be somewhat insincere because anytime a camera is in the room its not vérité. You’re not a fly on the wall. You’ve got boom in their face. So, when we gave them the Flip cameras it really was true because they just felt alone with their diary and were very candid.

Smith: You are obviously taking on a massive industry that doesn’t want people to see this film. Do you feel like you are prepared for any backlash that could come your way?

Heather Reisman: I think the risk of backlash is always the most to the filmmaker, the actual filmmaker, for the very reason she just said. Because how much unbelievable heart and soul…We were saying this morning, this had to be as much a labor of love, of passion for the subject…So, first and foremost it’s the filmmaker who is so brave to get out in front of the story. For me personally, it’s the part of being my age. I just do what I really believe and let the rest just happen. I think this is a right thing to be talking about. We owe it to ourselves, but more we owe it to our children. It’s interesting, I remember reading a book a long, long time ago about the Post family, that’s Post cereals. Processed foods started with the Post family and the Kellogg family, and there were a lot of good reasons for processed food and I think it gave people a lot of freedom that they didn’t have, but like with lots of things that continued to evolve, the processed food industry is now at a place where they really need to take stock and realize that in their drive for growth and their drive for profit and the never ending demand for Wall Street to see stocks going up, it starts to manipulate what you do until you believe that you can do something that is wrong and call it right. I feel fortunate to be along on this journey, but at the end of the day, its our responsibility to stand up and say, look, we need to take stock and the food industry needs to recognize and take responsibility and government has to stop being so dependant on the money that comes from lobbyists that they allow themselves to subvert what is their role, which is the well-being of society, in order to get re-elected.