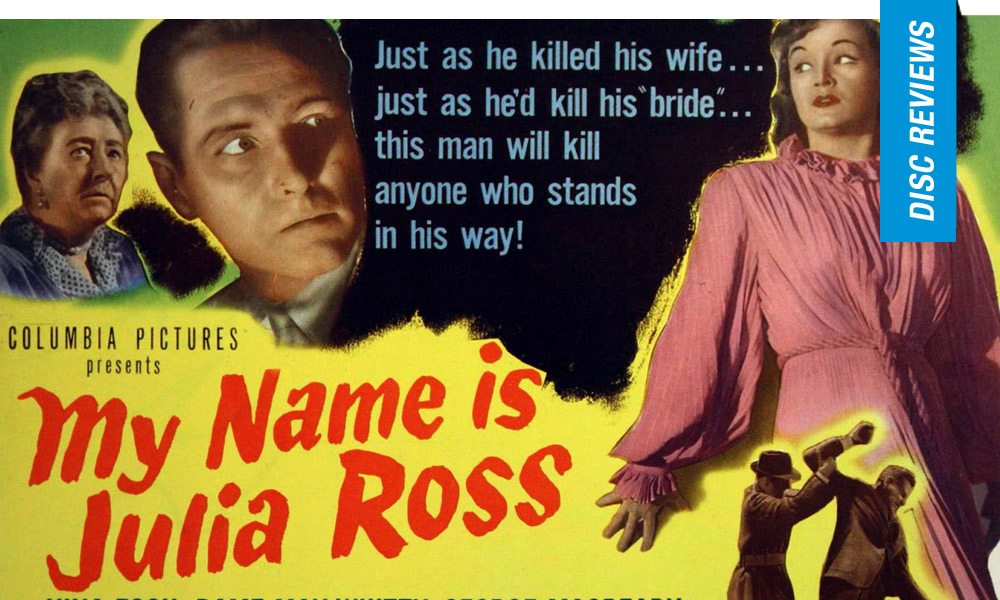 Without a doubt, American director Joseph H. Lewis is best remembered for his contributions to film noir, particularly his 1950 classic Gun Crazy and 1955’s The Big Combo. Arrow Academy has been restoring some of the director’s forgotten titles, having recently released Lewis’ final narrative feature, 1958’s Terror in a Texas Town (the director worked on various television shows until his retirement in the mid-1960s) and now revisiting some of his forgotten 1940s items. His UK set 1945 film My Name is Julia Ross is an excellent and extremely efficient take on the gaslight subgenre, which was later remade by Arthur Penn in 1987 as Dead of Winter. Dutch leading lady Nina Foch (later Oscar nominated for 1954’s Executive Suite) is the titular lead suffering from a formidable form of identity crisis.

Julia Ross (Foch) considers herself lucky when an aggressive employment agency suggests her for the position of a maid in the home of Mrs. Hughes (May Whitty). During the slapdash interview, Julia learns she must pack her bags that very evening and move into their home, where she will tend to Mrs. Hughes’ adult son, Ralph (George Macready). Much to the disappointment of her budding romantic interest Dennis (Roland Varno), Julia takes the job only wake the next morning after she’s been drugged, finding she’s prisoner in a different house in a different town, where everyone calls her Marion. Informed she’s married to Ralph and recovering from a nervous breakdown, Julia must find a way to convince someone of her true identity before her captors can fulfill their devious plans.

Foch proves to be incredibly likeable and surprisingly resilient despite being shunted into the corner of victimhood (later Mary Steenburgen would give a similarly striking performance in the film’s updated remake), and while the film breezes merrily through its seventy-minute running time one desires to have experienced just a little more character development for Julia Ross (which is funny because the tagline reads “Probing deep into a woman’s soul”). The prospect of elitist employers preying on live-in staff members is an insidious betrayal of trust and yet a scenario rife with possibilities not often explored, despite the acceptable and still contemporary occurrence of women working as live-in nannies. The expendability of the working class and an automatic distrust of women, (such as how easily it is to manipulate perceptions of another’s mental state) are also core undercurrents in My Name is Julia Ross.

Foch’s beauty is further highlighted by the repugnant villains played by Dame May Whitty (most famous for Hitchcock’s The Lady Vanishes) and the typecast George Macready as the scar-faced Ralph, who would later appear in the seminal noir, Gilda (1946), also from Columbia Pictures. While the Penn remakes presents a more complex scenario, Julia Ross is a ruthless exercise whereby the troubled young woman is only needed as a corpse to stand-in for the dead wife of Ralph, who mother and son conspired to kill so as to seize her fortune. “There’s even a small resemblance,” Ralph quips upon the selection of Julia. The script by is filled with unassuming zingers, perhaps most amusing when it seems Foch might have poisoned herself unexpectedly while locked in her bedroom. A deviously matter-of-fact May Whitty chides her son “Don’t be stupid Ralph. If she’s taken poison, we must act as though we cared.”

Arrow Academy presents My Name is Julia Ross as a new 2K restoration courtesy of Sony Pictures. The transfer arrives in 1.37:1 high-definition with uncompressed PCM audio. Picture and sound quality are nicely attenuated in this new edition, which includes an audio commentary track from noir expert Alan K. Rode.