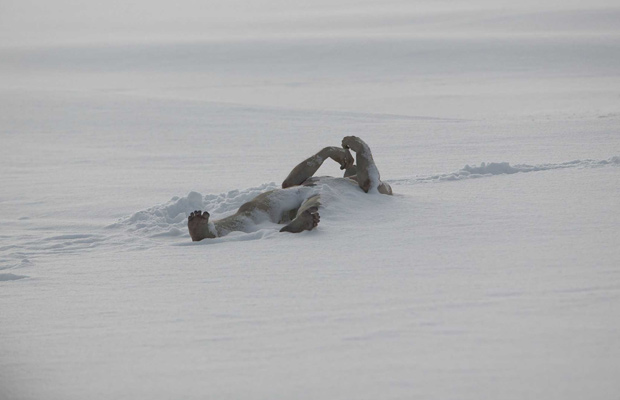 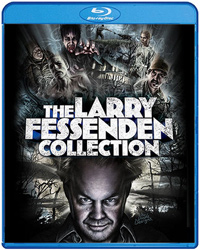 Scream Factory and IFC Midnight have paired up to present an inspired disc set for The Larry Fessenden Collection, an assortment of four of the director’s most notable genre films. Migrating between a number of notable projects as a character actor (he usually appears as some peripheral, grizzled weirdo, showing up in titles by Scorsese, Neil Jordan, and Kelly Reichardt, amongst others), he’s also a noted producer, editor, screenwriter, and cinematographer. But Fessenden’s made his most striking impression with a growing body of genre oriented independent directorial efforts. Usually prizing strong characterization amidst situations of mounting dread, Fessenden seems fascinated with testing the strengths and inherent weaknesses of mankind, and it’s probably easiest to label his filmography as environmental horror.

Out of Fessenden’s own production company Glass Eye Pix, 1991’s No Telling (or the Frankenstein Complex) melds motifs of Mary Shelley’s famed mad scientist with modern animal experimentation. Geoffrey Gaines (Stephen Ramsey) is a medical researcher working for a corporation called Fex, and studying a hypothesis on something called ‘chemo-electric therapy.’ Receiving a grant for his research, Geoffrey relocates his artistically oriented wife Lillian (Miriam Healy-Louie) to the countryside where he locks himself into a lab with his secret research. Lillian, meanwhile, feels even more estranged from her husband of three years and begins a casual flirtation with local organic farmer Alex (David van Tieghem). Soon, it becomes apparent that Geoffrey is performing Mengele-like experiments on local farm animals, even abducting a young girl’s little doggie from a nearby farm. Enhanced by Fessenden’s own idiosyncratic editing, the film is filled with arresting visual sequences, culminating in its rather grisly finale.

Fessenden’s most accomplished work is his 1995 film Habit, his only outing where he also casts himself as the lead protagonist. Michael Gingold’s insert essay aligns Fessenden’s film with two other low-fi vampire films from the same period of American cinema, Michael Almeryeda’s Nadja (produced by David Lynch) and Abel Ferrara’s The Addiction). It captures a certain gritty New York energy of the period, not unlike the texture of a Larry Cohen production. Fessenden gives a great performance as a man headed for a breakdown after losing everything, including his father, and the dissolution of a troubled relationship. Battling alcoholic tendencies, he meets the sexually ambiguous Anna (Meredith Snaider) at a Halloween party. She’s a bit too pretty and polished for Fessenden’s down and out vagabond, but it becomes clear increasingly Anna may be a vampire. It was the first major credit for DoP Frank G. DeMarco, who would go onto work regularly with John Cameron Mitchell as well as J.C. Chandor on All is Lost (2013).

In 2001, Fessenden returned to his ecological interests with an inventive addition to the werewolf genre via the Native American legend of the Wendigo (something John Landis reconstitutes to silly effect in the 2005 season of the Masters of Horror series with “Deer Woman”). Starring the incomparable Patricia Clarkson and Jake Weber as a family taking a wintry break from reality with their precocious son (Erik Per Sullivan) in a set-up similar to the beginning of something like The Shining (1980), Fessenden jumps into mankind’s habit for abusing nature. As seen from the perspective of the young boy, there may or may not be an angry woodland spirit materializing to exact retribution. The film features Fessenden’s most inventive use of special effects, sidestepping potential silliness with a rather haunting genre effort, lensed spectacularly by Terry Stacey, who has gone on to lens a variety of milquetoast romantic melodramas (Safe Haven; This is Where I Leave You).

The last addition to the collection is Fessenden’s most popular work, the 2006 title The Last Winter, shot on location in Iceland and unfortunately hobbled by a bit of third act CGI that compromises the rather compelling ecological message. Unravelling like John Carpenter’s The Thing (1982) but with the dialed down characterizations from No Telling, including a love triangle between a woman and two men of clashing viewpoints, Fessenden gets great performances from James Le Gros, Ron Perlman, and Connie Britton while Kevin Corrigan and Zach Gilford each have memorable moments. On a remote oil drilling station, an ornery head of operations (Perlman) is upset to return to find an environmental consultant (Le Gros) has not only taken the affections of his colleague/plaything (Britton) but has dire warnings about the facility’s damaging effects on the local environment. Fessenden and co-writer Robert Leaver assert that these fossil fuels are provided at the expense of the environment, and thus, we are virtually haunted by an angry mother nature and the spirits of the deceased creatures now rebelling against the virus of mankind. To date, it’s Fessenden’s most elaborate and ambitious directorial effort, and unfortunately it failed to recoup its budget at the box office.

Shout Factory presents these four titles in HD for the first time, and for those unfamiliar with Fessenden’s considerable body of work, this is a great discovery. Not only are these excellent transfers, but each title is accompanied by an extravagant amount of bonus features, including optional audio commentary from Fessenden on each feature.

Making of No Telling
A twenty four minute feature finds Fessenden speaking on the impetus of the film.

Archival Footage
A twenty-six minute feature has Fessenden introducing footage not included in the making of feauturette.

Short Film “White Trash” (1979)
A Super 8 short, which Fessenden counts as his second project is available on the disc.

Glass Eye Pix Sizzle Reel (1985-1990)
To track the progress of his projects, Fessenden includes a sizzle reel on these discs, beginning with his production company Glass Eye Pix in 1985.

The Making of Habit Featurette
The twenty-four minute feature includes raw footage narrated by Fessenden on this project, using the vampire as a metaphor, “new truths using old clichés.”

The Making of short film “Habit”
A five minute segment finds the director discussing the difficulties making this film, initially meant for feature length, which proved to be a difficult feat at the time.

Save You from Yourself Music Video
A music video for the track used in the film is available.

Short film “N is for Nexus” from The ABCs of Death 2 –
Fessenden’s four minute segment from the anthology film is isolated here, a tale of accidental tragedy costumed in classic movie monster imagery.

The Making of “N is for Nexus”
Nearly as long as the segment itself, this four minute bit of footage finds Fessenden working behind the scenes.

Frankenstein Cannot Be Stopped Music Video:
Fessenden introduces this music video he directed for the band Life in a Blender, which he claims is connected to the “Nexus” segment thematically.

Search for the Wendigo
Behind the Scenes – This thirty two minute making of featurette aims to maintain the mysterious attitude of the film as Fessenden does his best to convey the long-gestating interest he’s had in the subject, dating back to a third grade classroom experience in 1972.

Interview with Larry Fessenden (2001)
An eight minute interview from 2001 has the director speaking about the origins of the film and its intentions as a fable.

Glass Eye Pix Sizzle Reel (2010)
An updated sizzle reel of Glass Eye Pix productions is included, with titles from other artists that have been funneled through Fessenden’s company.

The Making of The Last Winter
The near two hour feature is a comprehensive examination of the title, beginning with initial location scouting, story development, special effects, and the eventual shoot, including cast and crew interview footage.

Archival Footage (2005)
Fessenden includes eighteen minutes of footage from the period not included in the making of feature.

Short films “Jebediah” “Origins” and “Mister”
Fessenden, in an effort to create an evocative marketing campaign for Jim Mickle’s Stakeland, Fessenden includes three shorts from other directors, with screenplays written by Nick Damici.

Tired of Killing Myself music video
A five minute music video with Fessenden and his usual collaborators (an interesting juxtaposition from the music video for Save You From Yourself in 1995).

New 2015 Larry Fessenden Interview
Journalist Adam Nayman conducted this twenty-two minute interview with Fessenden in March of 2015 which finds the director speaking of the evolving treatment of the horror genre and how it’s now an legitimate independent offering.

Championed by Guillermo Del Toro as “one of the most original voices to emerge in the horror field,” (although Fessenden is no longer attached to direct the English language version of Del Toro’s produced The Orphanage due to rumored casting issues), these are four highly inventive titles from a filmmaker who still flies under the radar. Although the absence of his last feature, 2013’s Beneath is rather curious considering Shout Factory owns the distribution rights, Fessenden is consistently intriguing, his films a haunting testament to the destructive forces of mankind, often featuring someone plagued by the awareness that the universe contains powerful forces they (or, rather, we) are too afraid or unwilling to acknowledge.