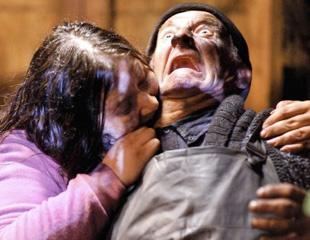 Despite it playing at major fall showcases such as TIFF and Venice, it appears that Magnet Releasing did the zombie walk to obtain the U.S. rights to George Romero’s latest film. Romero’s Survival of the Dead is your standard, low grade, zombie film fare from the current grandfather in the genre, dare I say Magnet is picking up the brand and not, the actual title. The pic will be release in the Spring – obviously debuting on VOD before making what should be a quick theatrical run.

GEORGE A. ROMERO’S SURVIVAL OF THE DEAD takes place in a desperate, nightmarish world where the dead walk the earth, relentlessly attacking the living. It is the story of Plum Island – a beautiful refuge whose isolation allows two powerful families to maintain a semblance of order in the wake of the zombie holocaust. But as the inhabitants slowly die off, the two clans become sharply divided: the O’Flynns believe that the undead must be destroyed without exception, while the Muldoons insist that afflicted loved ones be kept “alive” until a cure is found. The result is an escalating showdown with echoes of a classic Western stand-off that erupts in brutality and violence.