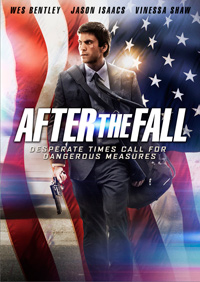 Exploring the ravaged remnants of the façade once referred to as the American Dream, editor turned director Saar Klein explores the slippery slope of middle class tendencies when faced with economic downturns in After the Fall. Initially titled “Things People Do” when it premiered at the Berlin Film Festival, the new moniker tends to favor the film’s less poetic, more pointedly exploitational elements with a film that mistakes timeliness for sincerity. Filled with convenient turns and easily attainable avenues of retribution, the film ultimately seems like an archaic example of the dangerous follies of patriarchy. Impossible standards placed on the role of a breadwinner in a modern world too costly to maintain when chained to the fantasy of the nuclear familial unit seems a promising angle, yet Klein never seems to get off the fence and into the dirt.

Struggling to provide for his family in suburban New Mexico, insurance salesman Bill Scanlon (Wes Bentley) has been recently laid off—he’s simply too easy on the clientele, not challenging claims as vociferously as his less seasoned colleagues. Rather than explaining this to his wife (Vinessa Shaw), who prefers to nag about Bill never receiving any promotions, Bill pretends to go into work every morning while he looks for another job. But as bills pile up, Bill finds himself engaging in criminal behavior by robbing easy targets, first, those that seem more disenfranchised than himself, like prostitutes or others engaged in secretive acts. Meanwhile, late nights hanging at a local bowling alley brings Bill into contact with a laid back police officer, Frank McTiernan (Jason Isaacs), a man that has lost his own family and detects that Bill may be going down the wrong path.

In today’s desensitized market, the events that transpire in After the Fall seem so damned cliché that you could tune in intermittently and still jump right into the film’s rhythms. It’s a dog eat dog world, and with backs against the wall, those mild mannered middle class denizens aren’t above resorting to base tendencies to maintain their sense of entitlement and privilege, something that Klein doesn’t really seem interested in navigating. Instead, the kindly man played by Bentley is just a normal Joe that loses his way, and the actor provides the film with the proper amount of gravitas. But Klein loses his way when he aligns Bentley in the all too convenient orbit of Isaacs’ cop, a man who, of course, empathizes with the erring individual because he knows what it’s feels like to fail as a family man.

The moral conundrum leading to the film’s final precipice is hardly provocative. A subplot involving a put upon store clerk played by Haley Bennett is stupendously clunky, while Vinessa Shaw, once again playing a suburban non-entity of a housewife, seems underutilized as a character. Engaging in criminal activity with the rational that it’s the only way to keep a deserving family’s head above water is indeed a thing people often do rather than doing the right thing. Klein has his basic concept down, but does little to actually examine the reason that this rational prevails.