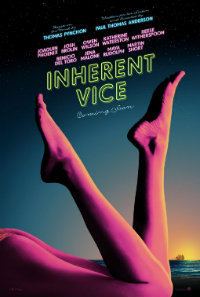 For his seventh film, auteur Paul Thomas Anderson stakes a claim as the first filmmaker to adapt author Thomas Pynchon, electing to tackle the 2009 novel Inherent Vice. The result is a queasy mix of gonzo comic neo-noir basted in the seedy nostalgic twinge of sleazy 70s era Los Angeles teased with a numbing carnival of multifaceted tangential characters diluting the film’s potency to the reductive force equal to a generous clusterfuck of all things strange. Fluctuating styles and clashing tones further enhance the film’s resounding detachment from a core ‘mystery,’ though for a while Anderson often masters a nifty balancing act of convincing us of the film’s ability to remain idiosyncratic and without much by way of narrative substance.

Set in 1970 Southern California, the tale begins in Gordito Beach, at the home of private investigator Doc Sportello (Joaquin Phoenix). An ex-girlfriend, Shasta Fay Hepworth (Katherine Waterston), suddenly shows up at his door, and she needs help. While they’ve been apart for some time, clearly the marijuana loving detective still fancies her. She’s been seeing a very wealthy and prominent land developer, Mickey Wolfmann (Eric Roberts), but Mickey’s wife and her boyfriend have approached Shasta about swindling Mickey out of his fortune by getting him locked into a mental hospital. Doc says he’ll speak with his new gal pal, DA Penny Kimball (Reese Witherspoon) to see what he can do about. But before he has time to make a movie, both Mickey and Shasta disappear, and when he wakes up next to another corpse potentially involved in the situation, Doc is suspected of murder by ornery cop Bigfoot Bjornsen (Josh Brolin).

A cavalcade of supporting characters gloss through Doc’s peripheral skim into the Los Angeles underbelly, some of whom are quite memorable, including recovering heroin addict Jena Malone (which is one of the scene’s more successful bids at comedy) and an always utterly arresting Jeannie Berlin. Others it would have been nice to see more of, like Serena Scott Thomas (sister of Kristin), but these smaller bits are eclipsed by the exaggerated characterization of (an albeit entertaining) Josh Brolin’s crooked cop Bigfoot Bjornsen, who enjoys suckling chocolate covered bananas while he privately mourns for his fallen partner.

Reese Witherspoon is, once again, playing one of Phoenix’s love interests, though in highly unlikely form here as a straight laced DA that enjoys sneaking over to his Gordita Beach casa to toke up at night. But it’s nowhere near the pernicious attachment he has for the film’s femme fatale played by Katherine Waterston (who memorably orchestrated a high school prostitution ring in the under seen 2007 indie The Babysitters), though she’s a wan presence that gets one major scene towards the finale that would have had greater impact had it not been placed in the film’s seemingly insignificant third act.

But where Inherent Vice tends to grate and distract is through the omniscient narration of a supporting female character that pops up infrequently on screen. Her willowy rendition of filling in convenient holes feels like a whole lot of telling and not showing, and seems like a bid to keep intact some of Pynchon’s celebrated prose. The film’s title gets awkwardly dropped in conversation and then explained for us via the narration. And as far as period piece L.A. neo-noirs go, the eternal, crumbling city gets lost in the jam-up of insidious characters packed wall to wall in Inherent Vice.

Sometimes ruefully extraordinary in its aim, Anderson’s maintained tone slips into virtual slapstick at times, especially in scenes including Owen Wilson or a bizarre cameo from Martin Short. Throughout it all, Joaquin Phoenix anchors the film with his steadfast presence as a stoned, befuddled private dick, but he’s locked into playing one singular note throughout Vice, and, like all its varied characters, we care little about the good, the bad, or ugly events that will befall any of them.