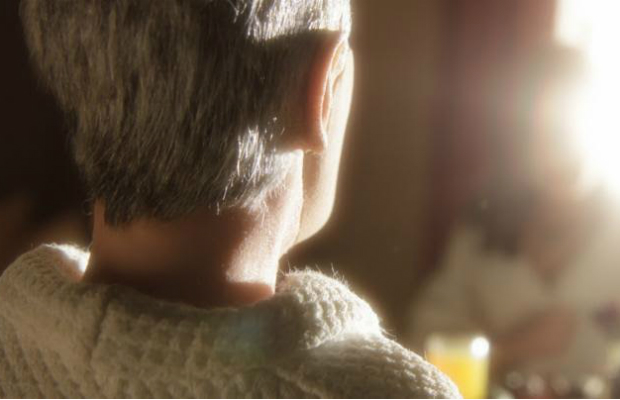 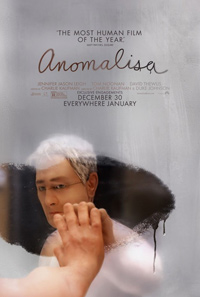 Springing from the mind that spewed an incredible string of transcendent work from Being John Malkovich to Synecdoche, New York, writer and co-director Charlie Kaufman‘s Anomalisa is yet another wholly original work, vastly different in form, but no less Kaufmanesque, narratively speaking. This go round he’s partnered with Duke Johnson, one of the creative minds behind the stop-motion production studio Starburns Industries (Moral Orel, Frankenhole), to rework a story he’d penned under the alias Francis Fregoli and produced for the stage as a ‘sound play’ back in 2005 for the Theater of the New Ear. The result is an inventive bit of stop-motion brilliance which seizes upon the inherent falsities of its chosen medium and employs them as a driving force in the examination of tedium and the apathetic perception of sameness as one grows old.

Anomalisa revolves around Michael Stone (voiced by David Thewlis), a family man and motivational author whose travelling on hire for a speaking engagement. Stone’s entire life seems to have become a sort of melancholic memory loop, his thoughts drifting backwards through time while the present is populated with varying bodies who appear to him with exactly the same faces sporting exactly the same uninflected voices (all of them voiced by Tom Noonan), until he accidentally meets Lisa (voiced by Jennifer Jason Leigh). A phone help operator with a facial scar and body image insecurities, Lisa appears to Michael like a perfect gift from the gods, shiny, new, odd and flawless – until inevitably his pet peeves reveal a mortal being, flawed like everyone else.

While the sheer weirdness of the extraneous characters (at first) unexplainably appearing with the same face and voice as the others is jarring and disorienting in and of itself, when paired with the fact that this cinematic world is fully composed of hyper realistic stop motion puppets and complimentarily lifelike environs, it makes for some truly memorable, visually poignant set pieces. Unlike the exaggerated humanoid designs rolling out of Laika or Aardman Studios, these characters feel remarkably real, despite much of them having been the product of a 3D printer.

Within Anomalisa, nearly everything is realistic except it’s nightmare-like depiction of Stone’s perception of his day to day interactions. Everything from clothing to coffee mugs are made to exact scale and the characters themselves are miraculously put into locomotion with anatomical precision. Even the on screen appearance of genitals and the portrayal of sex is performed with nothing short of humanistic vulnerability without the slightest hint of melodrama or romanticism. In one of the film’s most remarkable, emotionally complex sequences in which puppets fornicate with all the clumsy inelegance of real life, it manages to carry an immense weight as a potential transformative moment while still operating on a visceral level of the awkward physics of sex through a portrayal that is more human than most intimate sequences between real humans.

Deep down, Anomalisa is about accepting that humanity, no matter how rich/poor, pretty/ugly, whatever/whatever, is chocked full of sameness, even if the humanity depicted on screen is portrayed by the falsities of puppets – we are all just puppets of flesh, blood and emotion, putting forth our own images for others to consume or discard. And as time wears bitterly on, that sameness has the potential to drown out all the excitement and curiosity that life has to offer with the same numbing capacity as alcohol or heroin.

It’s a horrifyingly bleak picture that harkens back to the black comedies of Kafka, Gilliam and even the comparably intimate, adult stop motion of Mary and Max, reminding us to seek out and appreciate what makes one another unique. Kaufman and Johnson’s dazzling animated monster suggests something quite scary, but this fear comes from deep within ourselves and threatens to smother the beauty that is our inquisitiveness.