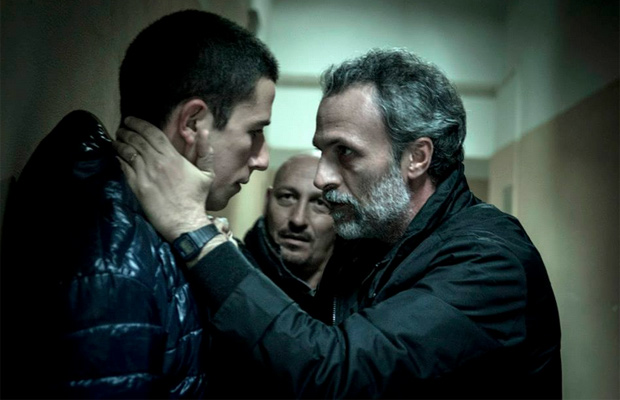 Now I Lay Me Down to Kill: Munzi’s Enjoyably Reserved Mafia Film 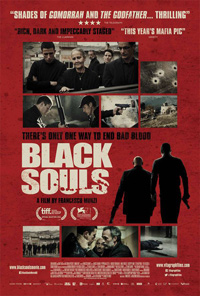 Premiering last fall at the 2014 Venice Film Festival, where it picked up a handful of prizes, Francesco Munzi’s third film, Black Souls, is a deliberately paced examination of familiar mafia standards. Based on a novel by Giacchino Criaco, it’s bound to be compared (and perhaps exist within the shadow of) Matteo Garrone’s highly celebrated 2008 feature, Gomorrah. But Munzi’s film is equally convincing, lending an austere sense of realism to what otherwise plays like a classic theatrical tragedy of three brothers at odds, locked in opposition and contention with the heavy baggage of their lineage. Light on dialogue and heavy on brooding characters marinating in their own mistrust or disdain of one another, it’s a successfully engaging film, but despite an enjoyably dire finale, isn’t as memorable as some modern comparative material.

A drug deal goes down in Amsterdam between Luigi (Marco Leonardi), representative of the Ndrangheta of Calabria, Italy, and a new Spanish client. Luigi returns to Milan, where he works with brother Rocco (Peppino Mazzotta), whose wife (Barbara Bobulova) seems detached from her husband’s business. Their nephew Leo (Giuseppe Fumo) has recently appeared, having fled the home of their goat herding elder brother Luciano (Fabrizio Ferracane), after engaging in an act of vandalism meant to represent his wish to join his uncles in the family business. Rocco seems ambivalent about the immature Leo, but he’s welcomed with open arms by the undiscerning Luigi. But Leo’s actions have caused drama back home, leading his father Luciano into a dire territory because Leo vandalized the property of the family responsible for slaying their patriarch years prior.

Black Souls represents a sort of departure for Munzi, previously directing two features dealing with immigration issues, including Samir (2004) and the Cannes premiered The Rest of the Night (2008). Here Munzi employs an excellent cast consisting mostly of stage actors in a plot that seems more akin with something like Joshua Marston’s The Forgiveness of Blood than any number of native mafia themed films. Munzi has also earned comparison to Visconti, particularly the Alain Delon led Rocco and His Brothers, if mostly for the trifecta of warring personalities at hand in southern Italy. Frustrating in that most of the dramatic conflict seems as if it could have been easily avoided, the tragic events play out like a curse, beginning with Leo’s explanation of how his grandfather was slain right in front of the eyes of his children, speaking to an ingrained fate. Not even goat herd Luciano, who has done what he can to remove himself from that lifestyle, can escape it.

As Luciano’s hotheaded son, newcomer Giuseppe Fumo steals many of the scenes, especially when united with Luigi, played by Marco Leonardo (Cinema Paradiso; Like Water for Chocolate), a smarmy thug. The brothers represent deliberately different aspects of worldly engagement, with Luigi the embodiment of typical behavior easily condoned, while wiser brother Rocco, the brains of their operation, understands a certain amount of discretion can go a long way. As is typical with these organized crime examinations, women tend to hover on the periphery, though beautiful Barbara Bobulova (of Ozpetek’s Sacred Heart, 2005) manages to make an impression.