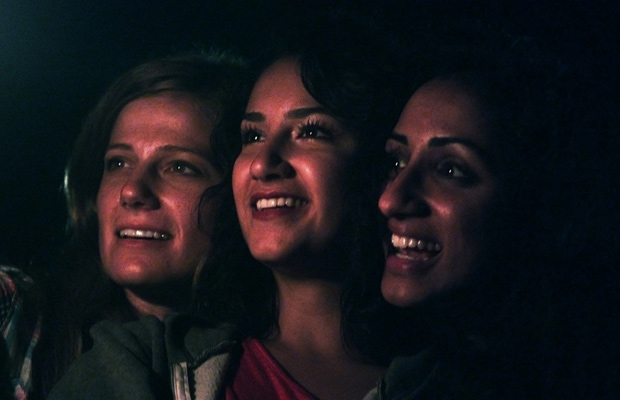 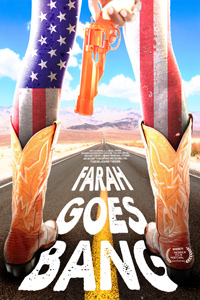 Exploring a provocative dark chapter in the voting tendencies of the United States general public by revisiting the 2004 presidential elections, where incumbent George W. Bush defeated Senator John Kerry for a second term, director Meera Menon’s debut, Farah Goes Bang is clearly not meant to appease denizens of those red states. Instead, it perhaps recalls a distinct moment in time for those that valiantly fought against a tide of regression to support an unlikely candidate, as seen through the eyes of a woman of Iranian heritage on a spirited road trip to garner last minute votes in the swing state of Ohio. Much more than a mere political statement, Menon crafts a low-key character arc around an impressionable two week period that feels much less detrimental in retrospect.

Three friends drop what they’re doing to go on a road trip to canvass votes for Senator John Kerry at the tail end of the 2004 presidential elections. With only two weeks to go and the candidates neck and neck at the polls, go-getter Roopa (Kiran Deol) rounds up the virginal Farah (Nikohl Boosheri) and hot-headed K.J. (Kandis Erickson) and travels to Ohio. As they set out, they’re warned not to bother with any red states, though this doesn’t dissuade Roopa from unwisely stopping in Texas, where the trio is demeaned, belittled, and invited to a sing-song about Jesus Christ. It’s clear that each woman has her own passionate investment in the outcome of this election, which has Roopa declaring the popular comparison of 2004 period to Vietnam. But they all learn, in their separate ways, that simply handing out pamphlets and spouting rhetoric does little to change minds hard-set in their own ideologies.

Juxtaposing a young woman’s sexual awakening on the eve of a national political event (albeit a less dramatically inclined one compared to the previous election year) creates a sense of refreshing reconsideration since the decade that’s past. Menon injects the film with hopeful hints of the change to come, granting a clip of Obama, whereby the characters comment, “He seems like a fantasy.” Likewise, the examination of regressive, racial epithets launched at those bearing the likeness of any variety of Middle Eastern ethnicity seems ultimately intertwined with the personal as political. From the headscarf Farah dons, to the item she uses to break her own hymen (therefore claiming her own virginity), Menon gives us a quiet, graceful portrait of female agency that also serves as an example for what constitutes the wide reach of American identity. Mention of Kerouac’s seminal On the Road speaks for a wish to reinvent the road trip film, or at least experience its possibilities from another perspective.

Nikohl Boosheri proves to be a gently compelling presence as the soft-spoken Farah, a young woman drawn out of her shell as the film progresses. As her close-knit friends, Kiran Deol and Kandis Erickson are comfortable sidekicks, and there is a genuinely improvised feel to the warm dynamic of the three, lost in their own ideology as they discuss which candidate they’d rather sleep with or why the culturally accepted metaphor for women’s genitalia to fruit is archaic. Their frank, sexually charged conversations are also fresh, and Menon keeps the tone from sliding into either gratuitousness or melodrama when we breach more sensitive, dramatic elements.

While Erickson’s hotheaded K.J. lands the trio into legal trouble as she’s unable to turn a blind eye to the ignorance, racism, and hatred they often encounter, Menon’s film shines in quieter moments when Farah speaks candidly with people on her door-to-door visits, including a subtly moving visit to weary veteran Walter (Lyman Ward) and a sassy drag queen (D.J. Pierce), neither of those instances sounding as schlocky as they may promise on paper. Inevitably, Menan makes good on the film’s title, ending with Farah’s clichéd sexual encounter with a young man that involves pistols and fireworks. Little time is spent on the doomed outcome of the election, ending on a positive note aided by a swing of hard liquor.