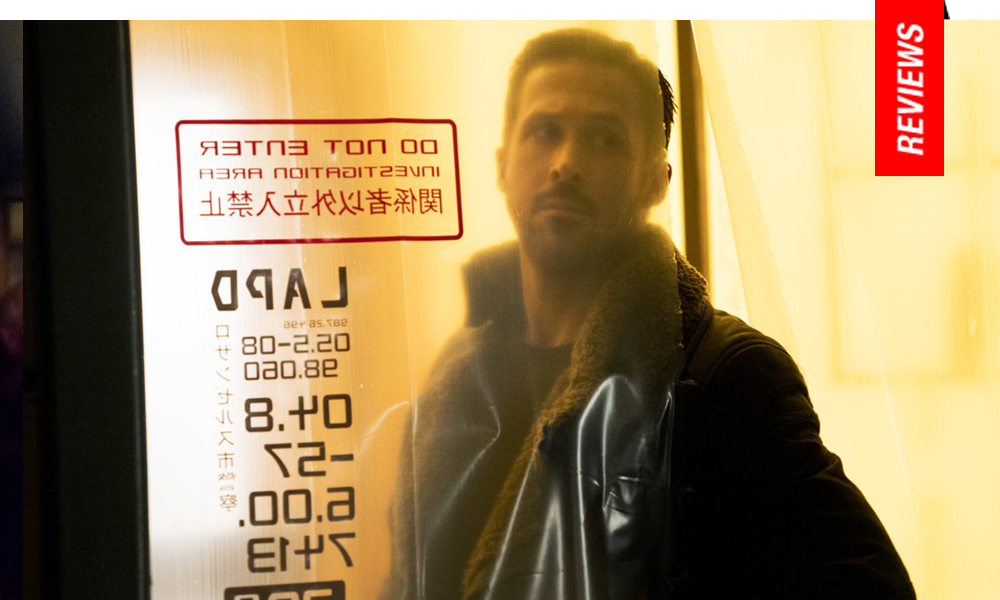 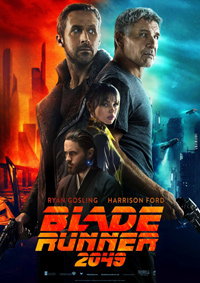 Do androids dream of electric sheep? It’s a question never completely answered, or even vocalized in Ridley Scott’s 1982 cult classic Blade Runner, based on the novel by sci-fi supremo Philip K. Dick, who titled his narrative as the posed question. Whatever the limited or unlimited capabilities of these androids, designed specifically by humans as slave labor for civilization’s basic necessities, their psychological and emotional capacity isn’t a popular speculation by their makers. And the arduous yoke of second-class citizen remains the burden of these androids, known as replicants, in Denis Villeneuve’s gloriously stylized continuation of their sentient saga in Blade Runner 2049, which takes places thirty years after Scott’s 2019 Los Angeles set originator.

Dripping with grimy, foreboding post-apocalyptic dread, the metropolis has only further corroded into a steely jungle of continual rain and bouts of blustery snow. Humans and replicants are (almost) interchangeable refuse in the decades since Harrison Ford’s dubious hero disappeared, and yet a Kafkaesque militaristic infrastructure remains.

In the thirty years since Officer Rick Deckard, a Blade Runner assigned to hunt down rogue replicants, escaped Los Angeles with Rachael, a prototype he’d fallen in love with, little has changed in the continually troubled confines of Earth. After eco-systems collapsed and the Tyrell Corporation, which created the replicants, became defunct, a new phoenix rose out of his ashes with pioneering scientist Niander Wallace (Jared Leto). Following a catastrophic black out which emptied mankind’s digital information reservoir, Wallace resurrect Tyrell’s technological failures and created a whole new breed of ‘obedient’ replicants, replete with predetermined extermination dates. Now, in 2049, Agent K (Ryan Gosling) has been tasked with tracking down the old Nexus models, those of the ‘open-ended’ life cycle, who escaped destruction. During a routine close-out of elusive asset Sapper Morton (Dave Bautista), something strange is found buried on his property, something which has the power to turn the world on its head.

In an effort to avoid spoiling Blade Runner 2049’s mystique, pains have been taken by flagship studio Warner Bros. to dissuade detailed critiques in order to avoid divulging plot points. Sans some potential missed opportunities to observe various subtexts, in its most superficial sense, the real star eclipsing Ryan Gosling’s inscrutable central performance (whose formidable brooding demeanor and emotional arc would make him an ideal successor of Hamlet) is cinematographer Roger Deakins’ work, who manages to make excellent use of contemporary technological advances to create a similarly nightmarish Los Angeles (the static holograms floating over the city are more interactive, garish, sexual). But it’s a third act setting in an Angeleno sister city hit by a Chernobyl-like event which becomes real swoon-worthy, while a score from Hans Zimmer and Benjamin Wallfisch join Harrison Ford for a surprisingly emotional third act.

Villeneuve, working from a screenplay penned by original scribe Hampton Fancher and Michael Green, whips up a universe which may not be entirely new, but at least conjures the existential ennui of the first film, a world on a wire stuck between those desperate to maintain a semblance of the past, and a repressed population of ‘creations’ aching to crash into the dawn of a new age. Whatever secrets are revealed through the course of Blade Runner 2049, none of them are as extraordinarily innovative as the film would probably lead one to expect.

Recurring themes as to what constitutes the essence of humanity, the creator vs. the created, and what defines mankind’s supposed innate ability to love bolster the film’s emotional core—sometimes to uncomfortably on-the-nose effect (a major let-down in the cast is Jared Leto as the God-like innovator of a supposedly brave new world, an actor whose self-inflated poise suggests an appropriate fit, but who does not compete with Joe Turkel’s Eldon Tyrell).

In many ways, besides mirroring the Biblical origins of Jesus Christ, Blade Runner 2049 plays like the mirror version of the first film. Whereas Deckard’s humanity was a point of contention, Agent K’s replicant serves as the lynchpin for this new wave identity crisis. Many elements from Scott’s film are regurgitated for other purposes, as well. Scene-stealing Sylvia Hoeks, standing in as the pedestal replicant, a place once occupied by Sean Young’s Rachel, has ulterior motives (and also recalls Genevieve Bujold as a screen presence).

Destined for less of a receptive struggle than Scott’s initial 1982 film (which was treated to five different cuts), and following the success of 2016’s vibrantly intelligent Arrival, Villeneuve has crafted something which merits comparison to Tarkovsky’s brand of philosophical sci-fi (albeit with comparatively superficial existential concepts, natch). Echoing a bygone era of studio films daring to push boundaries and expectations rather than demurely adhering to them, Blade Runner 2049 is every bit a soliloquy of dread in response to Scott’s ballet of violence.