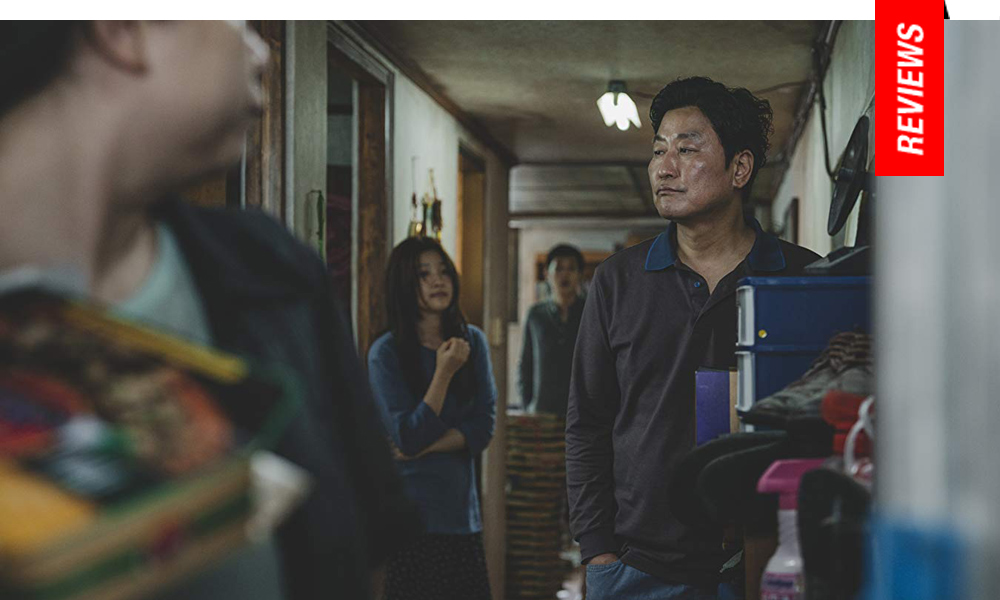 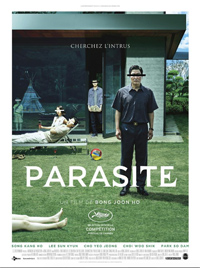 Strident class disparities in South Korea provide Bong Joon-ho with a novel approach to black comedy in his latest, Parasite. Not unlike Lee Chang-dong’s recent masterpiece Burning, Joon-ho formulates a stellar juxtaposition of elitism vs. economic hardship in a tale showcasing a family of hustlers who wheedle their way into the good graces of an oblivious wealthy family. Returning to a mood and tone which dismantled institutional follies with dark humor and grisly violence from his 2003 breakout Memories of Murder, this is a far cry from the big-budgeted fantastical genre pieces such as The Host (2006), Snowpiercer (2013) and Okja (2017) which have elevated the South Korean auteur’s international platform considerably. Despite wearing its central conspicuous messages blatantly on its sleeve, this is another piquant pleasure from Joon-ho—a hostile dramedy with something new to stay about families who stay together…

Ki-taek (Song Kang-ho) lives in a grungy “garden” level apartment with his wife Chung-sook (Chang Hyae-Jin) and their two teen children Ki-Jung (Park So-dam) and Ki-woo (Choi Woo-shik). All of them are currently unemployed without nary a job opportunity in sight. As they grapple with how to maintain free Wi-Fi in order to keep using their cell phones, a university friend of Ki-woo’s drops by suddenly to say goodbye before he travels abroad. Unloading a lucky stone on the family taken from his father’s personal collection, which basically operates like a lucky charm, he also informs Ki-woo he has recommended him as a tutor for Da-Hye (Jung Ziso), the teen daughter of the wealthy Mr. and Mrs. Park (Lee Sun-kyun; Cho Yeo-jeong). Forging a diploma, Ki-woo arrives at their home to interview, landing the job. He overhears Mrs. Park stating she’d like to hire an art teacher for her young, rambunctious son Da-song (Jung Hyeon) and Ki-woo states he knows the perfect, highly sought-after candidate, which allows his sister Ki-Jung to arrive and manipulate her way into the position. The siblings plot together to find ways for the Parks to fire both their driver and their maid, paving the way for their parents to also become staff members.

There’s an odd resemblance between Parasite and Hirokazu Kore-eda’s gently sentimental 2018 Palme d’Or winner, Shoplifters, which features a similar nuclear unit engaging in dysfunctional survival skills to make ends meet—but such comparisons are superficial at best. Instead, it repositions Joon-ho alum Song Kang-ho as another loveable, sloppy patriarch a la The Host, wherein each of his family members has their own particular contribution for conquering a monster—in the former case it was a fantastical creature terrorizing Seoul while this time their foe is something more systemically toxic.

Joon-ho’s script (co-written by Han Jin-won, director of the 2017 title The First Lap) does a fantastic job of outlining the characterizations of the family, including their triggers and vulnerabilities. As each of them finds a way to sabotage the current staff and replace them, heightened hilarity abounds, particularly with the evacuation of Lee Jung-Eun as Moon-Gwang, the steadfast maid, who has a deadly allergy the family mercilessly exploits.

As comfort sets in, allowing for the seeds of more dysfunction to be sown as Ki-Woo begins to romance the teenage daughter under his questionable tutelage and the family begins to celebrate their good luck (credited to the prophetic stone), Moon-Gwang mysteriously returns one rainy night which disrupts their good fortune significantly. And it’s this turning point where Parasite morphs into another exercise altogether, with a slew of furious surprising turns which will heighten the experience for some just as it blatantly solidifies Parasite’s explicit messages.

Never clunky but ultimately designed to be a crowd pleaser, there are shades of Claude Chabrol’s La Ceremonie (1995), a famed adaptation of Ruth Rendell’s A Judgment in Stone, also a parable from the perspective of the demeaned help of a wealthy family’s chilly home. The only trouble is, Joon-ho’s host family is absolutely oblivious, naive and obnoxious, as played by Hong Sang-soo alum Lee Sun-Kyun and a daffy Cho Yeo-Jeong. Instead of survival at all costs, Parasite exercises contempt at the consequences of survival. As Chung-sook quips early on “Money is an iron. It smooths out all the creases.” But without an outlet to plug the iron into, the creases don’t smooth out the same.

Reviewed on May 21st at the 2019 Cannes Film Festival – Main Competition, 132 Minutes