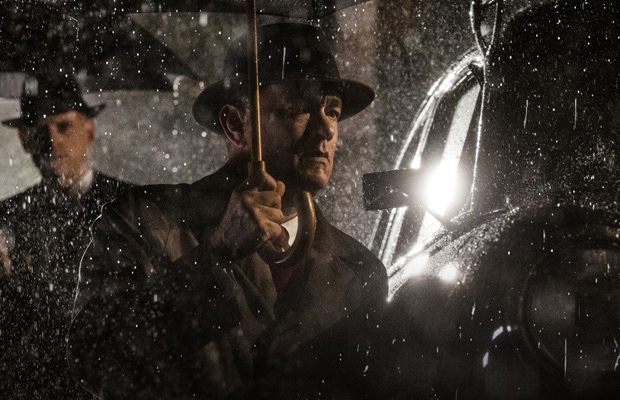 A Bridge Too Far: Spielberg Gets Chilly with Cold War Curiosity 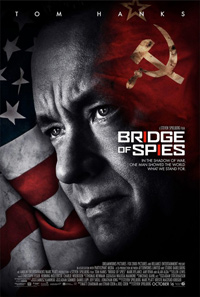 We’re used to seeing Steven Spielberg’s penchant for WWII recuperations, whether it be via the Nazi villains of his Indiana Jones films or the more solemn remonstrance of Schindler’s List or Saving Private Ryan. He’s budged a little further past that historical marker to tackle America’s next dark chapter with Bridge of Spies, a true story examining the murky shenanigans of the Cold War and the desperate, hysterical fight against Communism. Handsomely assembled, it’s a film that would’ve been descried as a watered down bit of propaganda had this been produced during or shortly after the McCarthy witch hunts of the 1950s. Starring All-American everyman Tom Hanks, who certainly evokes the correct feel of privileged bemusement and disinterest in the labyrinthine, international netherworld yawning outside the borders of the Land of the Free, Spielberg seems to be merely reiterating the greatness of a generation once championed for its bravery, and a method of filmmaking once cherished for all the questions it didn’t ponder.

Based on a true story, insurance lawyer James B. Donovan (Tom Hanks) is assigned to defend accused high-level Soviet spy Rudolf Abel (Mark Rylance), a Russian born British citizen arrested in 1957 Brooklyn. Without a doubt, Abel is guilty of the accusations, but Donovan is unhappy with everyone’s treatment of his client as a guilty citizen before being afforded the due process of law he is entitled to. But even Donovan’s boss (Alan Alda) is miffed when he decides to appeal the guilty verdict Abel receives due to some inconsistencies with the investigation. When a mysterious letter appears out of East Germany from Abel’s supposed wife, the CIA steps in and asks Donovan to fly to the Communist country and exchange Abel for a US pilot shot down over Russia. Since Donovan is not affiliated with the government, this avoids stepping on any political landmines, considering the Soviets have refused to recognize Abel as their own, hence the strange charade being funneled through ally East Germany. Except the Germans and Soviets don’t want the same thing, something Donovan finds out first hand when he learns an American student has also been trapped on the wrong side of the Berlin wall. His personal aim is to retrieve both young men and defy the expectations of all three government entities.

There’s been a growing number of recent cinematic examinations pertaining to shadowy Cold War politics of the period, with specific reference to the particular paranoia and dread within Communist East Germany. Christian Petzold’s supremely masterful Barbara (2012) and the German television series “Deutschland 83” are recent native illustrations, while this year yields a poignant representation of blacklisted screenwriter Dalton Trumbo, one of many artists from the filmmaking community castigated in the sweeping ripple effects of the Red Scare. At a certain point in time, examinations of this period didn’t translate into cinematic success, such as Hitchcock’s Torn Curtain (1966), though Carol Reed’s film noir classic The Third Man (1949), upon which Spielberg’s exploration of illogical political alliances is reminiscent, stands out as an exception.

The dependable, if increasingly stale Tom Hanks, an actor often cast as a man doing the right thing no matter the cost, makes Bridges of Spies reminiscent of latter day Hitchcock vehicles starring Jimmy Stewart, but lodged in the amber hued longing of Capraesque nostalgia. More effective is the droll Mark Rylance, though the screenplay from Matt Charman and Joel and Ethan Coen saddles him with a repeated line meant for comedic relief which only sounds incredibly hammy (and more irritating upon each use).

Amy Ryan, who made a visit to Cannes this year in Joachim Trier’s Louder Than Bombs, plays a comfortably conservative 50s housewife, and one wishes she’d been allowed the same energy she presents in the insipid Goosebumps (opening the same weekend). On the Euro side, some familiar places (Sebastian Koch; Burghart Klauβner) have little to do, though they’re a bit more fluid than the Apple Pie youths (Billy Magnusson, Austin Stowell) Spielberg pads out his 50s era American with.

Expertly shot from famed DoP Janusz Kaminski, it’s a clandestine affair which yields little even as far as visual delights go, though the terror invoked from the construction sequences of the dreaded Berlin Wall are quite effective. Much like its disaffected terrorist and its smirking lead character, Bridge of Spies seems too smug for its own good, and much too dry to be defined as a Cold War thriller. It doesn’t feel good—it feels false.