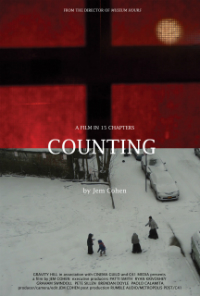 Jem Cohen invites us once again on a lackadaisical travelogue through cityscapes and unkempt streets, through museums and graveyards the world over. Rather than settling into a single city and involving us with charactorial allure as he did to striking effect in 2012’s Museum Hours, with Counting, the New York City-based filmmaker is content to document his travels over the course of the last few years from his home base to the Moscow, London, Istanbul and beyond, taking stock of the world’s increasing technological homogenization. Noting the quirky singularities of each of his chosen locales, cataloging each with episodic numerical reference points like a deck of cards shuffled together with the grace of a studied magician, casually precise, this is worth the full coach fare.

Unlike the late Chris Marker (whom the last chapters of the film are dedicated to) whose own travelogues were orally layered with angular observations and insightful inquires, Cohen prefers to keep dialogue down to a bare minimum, surprisingly evoking Marker’s political side to include occasional audio snippets from congressional hearings about NSA spying to comment on the invasive state of the world. Mostly the shouts of protesters, overheard alien dialects, the buzz of traffic and occasional serene silences fill the soundscape, allowing his images to breathe deeply and our minds to soak in the sights unfettered by comment.

The screen is filled with images of man made structures and the rush of bodies between them and the moist, rigid, rocky and wrinkled physical textures that outline each. Much of the film is lensed through panes of glass, often creating beautiful layers of images, fractured and reflected. Many of these windows are in transit, thus Cohen’s camera captures Coney Island frozen over and abandoned from the perspective public transit and the rain speckled swoop of street lights in the dead of night from the inside of a moving car.

As the chapters within Counting advance and more people are seen disconnected from their metropolitan existence via technology and a general sense of jadedness, it becomes apparent that Cohen’s clearest formal commentary is that we’re walling ourselves in, putting up glass barriers between ourselves and the world we once cherished and engaged in. This idea, though running throughout, is epitomized in a single shot of a gym overlooking a bustling city street in which a line a treadmills give way to glass walls. The people inside, probably jacked with earbuds and iPads drowning out the world around them, look like hamsters in a mechanical terrarium, completely oblivious to the happenings just below their eyeline. When this feeling begins to overwhelm, Cohen finds refuge in the swell of rebellious localized music tracks, cleansing images of greenery, and like Marker, the playful randomness of cats. It is in these emotive releases and reflective meditations that Counting finds its amiable off beat rhythm. Cohen’s highly personal city symphony resides in the grips of modernity’s cultural crisis while weaving its own remarkable threads of ennobling social illumination.