In the Mood for Loren: Ponti Resurrects an Icon in Reticent Remake 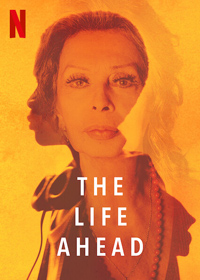 It’s been over a decade since iconic Italian actress Sophia Loren appeared in a narrative cinematic feature, last seen in a supporting role in Rob Marshall’s middling musical Nine (2009), and prior to this, the last theatrical release of Lina Wertmuller’s in Too Much Romance…It’s Time for Stuffed Peppers (2004). A television film based on her sister’s autobiographical portrait of Loren’s own rise to fame My House is Full of Mirrors (2010) and the short film “Human Voice,” one of my iterations of the famed Cocteau play directed by her son Edoardo Ponti, have been the Oscar winner’s only other film appearances in the 2000s, so it’s safe to surmise the third feature from her son Ponti, The Life Ahead, is a big deal for fans of the luminous star.

A loose remake of the fantastic 1977 title from Moshe Mizrahi, Madame Rosa, which won an Academy Award for Best Foreign Language film and a Cesar for Simone Signoret, has fallen into obscurity, though it’s a much darker and melancholic version of the novel from Romain Gary. Ponti allows for a quietly resplendent Loren to fill out this contemporized tale of an Auschwitz survivor’s unlikely camaraderie with a young Muslim orphan in a version wholly dependent on the energy of its two leads.

Scrabbling to make ends meet in her apartment which serves as a forlorn daycare on the Italian seaside, Madame Rosa (Loren) finds herself accosted at the market one day by a young boy name Momo (Ibrahima Gueye), who steals a bag filled with candlesticks she needs to sell to pay rent. Momo, a young, orphaned immigrant, resides with Dr. Coen (Renato Carpentieri), who recognizes the bag as Rosa’s. Forcing Momo to return the stolen items and apologize, Dr. Coen uses the introduction to get the child into a more secure and stable home environment. Madame Rosa is at first reluctant but can’t afford to pass up the money Dr. Coen offers her to care for the child for two months. Initially stern with Momo, they soon enjoy an affinity for one another upon letting their guards down. However, Madame Rosa, who is a Holocaust survivor, begins to suffer frequent memory spells. And though she is assisted by another tenant in the building, her care falls onto Momo’s shoulders. Having made a promise to Madame Rosa, he is forced to honor their agreement when she’s suddenly carted off to the geriatric ward at a nearby hospital.

If Signoret’s original performance has been denied the cultural longevity it deserves, Ponti’s remake feels divorced enough from it to feel authentically contemporary in its melding of traumatic European legacies, from the atrocities of WWII Germany to ongoing immigration issues and xenophobia. As such, The Life Ahead feels more like a mainstream version of what Aki Kaurismaki was up to with his lauded 2011 title Le Havre.

Loren, absent the large, obscuring glasses which became something of a signature in her later period appearances, dominates the screen in a quiet performance as a cantankerous woman whose sweetness hides beneath a gruff veneer. Still struggling to make ends meet, the trauma of her past begins to engulf her mind and memory just as she befriends the forlorn Momo, with newcomer Ibrahima Gueye well-matched for her imperious energy. It’s a testament to Ponti’s ability in allowing the material to breathe through the small apertures of authenticity between his leads, and The Life Ahead might, at times, suggest schmaltzy capabilities but their relationship is believably and immediately muted by life’s realities.

Outside of their shared screen time, Ugo Chiti’s script (who has penned several works for Matteo Garrone) tends to paint in clichés with Momo’s personal drama involving his collusion with a local drug dealer remaining a bit undefined. Sure, the trajectory and limited options for survival as a homeless immigrant orphan might make this believable, but it feels a bit rote, not unlike the convenient relationship with Momo’s back-up, the kindly but strangely convenient Dr. Coen (a warm but useless presence for character actor Renato Carpentieri).

Ponti also downplays Rosa’s past, as in the original she was an ex-prostitute who cared specifically for the children of other sex workers whose mothers could not afford to care for them. Hints of this past are subtly mentioned, but like Ponti’s utilization of Loren in the Cocteau adaptation of “Human Voice,” his reverence for Loren as his mother becomes part of a hallowed presentation which eschews any kind of sexuality or intimacy. Shot by Angus Hudson (Cashback, 2005), The Life Ahead isn’t defined so much by the certain urban squalor of a particular neighborhood (as Pigalle was the particular backdrop of Mizrahi’s version), but it’s a luminous rendering as far as Loren’s return is concerned.