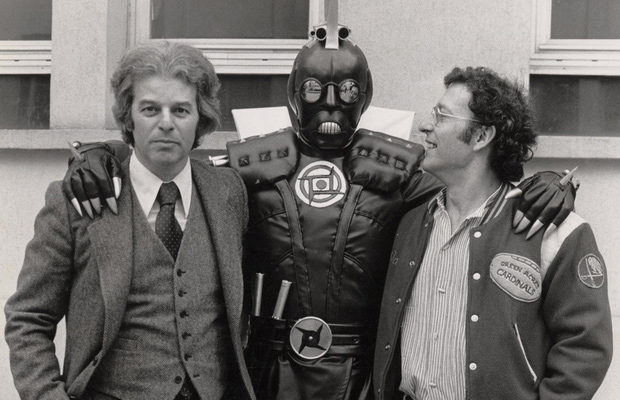 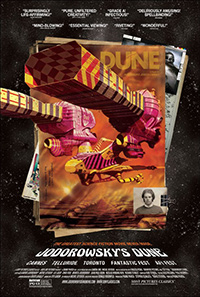 Frank Herbert’s epic novel Dune has been a sci-fi benchmark since it’s original release back in 1965, and since, there have been several attempts at a worthy film adaptation. No one guessed that psychedelic surrealist Alejandro Jodorowsky, who rose to fame for his midnight oddities El Topo and The Holy Mountain, would be the man to stake his claim for the task. After a friend suggested he check out the book, Jodorowsky (without initially reading it first) decided it to be the follow up to his 1973 sleeper hit. His goal was to use the interstellar opera to expand the consciousness of youth the world over, reproducing the mind-bending effects of LCD without taking the drug itself. Fancying himself a movie-making martyr with a metaphysical mission, Jodorowsky remarkably amassed a past and future A-list cast and crew of ‘spiritual warriors’ (as he called them) to attempt the seemingly impossible, stretching the technical boundaries of cinematic sci-fi at the time to create his version of Dune. After two years of full-bore prep, the film fell apart due to lack of a studio backer. The story of his incredible failure has become the stuff of Hollywood legend, and it’s now the subject of Frank Pavich’s deliriously amusing documentary, Jodorowsky’s Dune.

Sticking to the basics, Pavich smartly relinquishes center stage to Jodorowsky, allowing him to tell the tale himself with only by a small collection of making-of artifacts and a select few mouthpieces at his back. Now a vivacious 83 years old, the director rambles on excitedly about his many discoveries and chance encounters that led to the congregation of his insanely talented filmmaking assemblage. Casting his pre-teen son, Brontis, as Peter Atreides alongside the Kung Fu star David Carradine in the leading role as Duke Leto, Jodorowsky surrounded them with an eclectic mix of artistic giants whose unyielding thirst for creativity and larger than life narcissism often left them teetering on the edge of sanity. Thanks to his own blind aplomb and appreciation for the surreal, Jodorowsky convinced the impossible to work with Salvador Dali to take the role of Emporer Shadom Corrino IV, offering him the title of highest paid actor per on-screen minute in the world, and his famed muse, Amanda Lear, the role of Princess Irlan. And, at the height of his fame, Mick Jagger blindly accepted the role of Feyd-Rautha at a party in a chance meeting. Another man whose poor professional reputation proceeded him, the indomitable Orson Welles agreed to play the bloated Baron Vladimir Harkonnen after being offered to be fed by his favorite chef throughout the shoot.  Did I mention Pink Floyd and Magma were also slated to score the film?

Now, we must take these claims with a grain of salt, as Jodorowsky nearly alone attests to this epic cast, but his vivid, often hilariously animated accounts seem to match the ridiculousness of the entire project. Where cold hard facts come into play is with the men behind the aesthetic aura of Jodorowsky’s Dune.  Before Ridley Scott’s monumental sci-fi touchstone Alien came to fruition, several key men behind it were fostered by Jodorowsky. Dan O’Bannon (the writer of Alien), H.R. Giger (the artist who created the original Alien creature) and Chris Foss (one of the leading concept artists on Alien) were all plucked from obscurity after face to face meetings of spiritual connection (Giger and Foss give their accounts on screen, but sadly, O’Bannon’s voice only appears lifted postmordem from an archival interview). If Jodorowsky felt someone was not of the proper mindset, they didn’t make the cut (as was supposedly the case for 2001‘s special effects guru Douglas Trumbull, who’s name did appear in an early draft of the Dune poster). With his own stable of talented subversives assembled, he approached every major studio with a copy of his legendary storyboard book, in which the film was described shot for shot and meticulously drawn by famed comic artist Jean Giraud, a.k.a. Moebius.

Despite being awed by both the ambition of the undertaking and the professionalism of their presentation, no one believed the wild and wooly Jodorowsky was capable of a massive (for that time) $15 million dollar film that could potentially span hours of screen time.  His disappointment still shows in his face as the agonizing memories float to the surface,  the downtrodden Dune storyboard tome laying before him.  Pavich makes impressive use of the book, weaving frames together to create animated sequences of the unmade film – one, the epic opening long take which aimed to top that of Welles’s Touch of Evil intro – giving us just a taste of what could have been.  Orated by its insane author, his surviving merry men and a sprinkling of critics and admirers, Jodorowsky’s Dune is a fantastic docu-fable that brings to life a mythic failure with such verve that it might almost be better that it allows the film it sketches to live on in the imagination rather than in what could have been a catastrophic failure the likes of Lynch’s attempt. Wrapping the film with a bitter sweet silver lining, Jodorowsky pleads for humanity to embrace our ambitions, expand our minds and to attempt the impossible – all for the sake of art.  If nothing else, Pavich’s docu proves Alejandro certainly did his part.