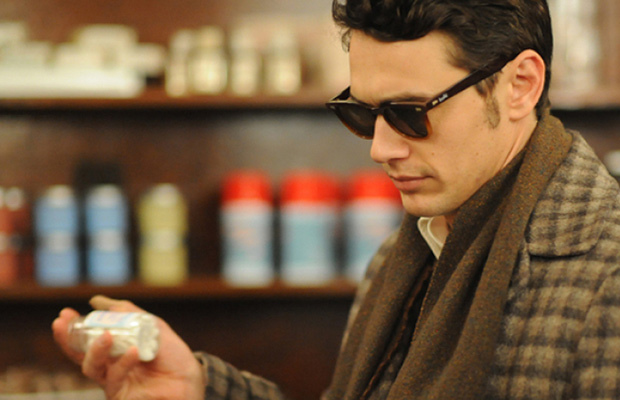 Crazy, Stupid, Art: Carter’s Directorial Debut Less than the Sum of its Parts 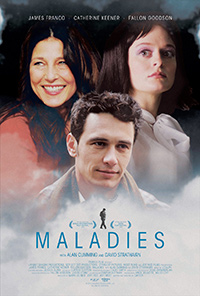 Multimedia artist Carter makes his directorial debut with Maladies, an intriguing sounding project that stars James Franco, who collaborated with Carter back in 2008 on an experimental project called Erased James Franco, which, over the course of an hour, sees the actor re-enact scenes from his own filmography as well as a reinterpretation of Julianne Moore’s performance from the Todd Haynes film, Safe (1995). If you think that sounds lofty and ambiguous, then the meta-context attempted in their latest effort feels nearly mainstream in comparison (though, to be clear, sometimes reinterpretation is a euphemism for remake). Borrowing details from the similar events in Franco’s own life as it slips unexplainably between eras and anachronisms, a certain mystique fools us into thinking there’s something of actual substance going on under the vague veneer of mental illness and what it means to be an artist.

An omniscient narrator (Ken Scott) announces that this is a tale about “an actor who is no longer acting,” named James (James Franco). The same voice seems to be something that only James can hear, who often converses with the voice. Leaving behind acting to pursue writing an ambitious novel, James lives with his friend and caretaker Catherine (Catherine Keener), who is a painter, and his troubled sister Patricia (Fallon Goodson). But, as we’re told by the narrator, James is easily and constantly made to be uneasy, distracted by existential woes, which work him into such frenzy that only the sound of a dial tone will put him at ease.

Filmed back in 2012 (and playing at the 2013 Berlin Film Festival), Maladies unfortunately gets a release well after a tidal wave of Franco’s other homage projects have arrived, several of which are films that also have lofty intentions as they try to recreate and/or experiment (but sometimes, underwhelm). Rather than seeming unique or playful with its obvious nods to Franco’s own stint in soap operas, Carter’s film feels like a project belonging solely to the insulated world of James Franco and not something meant for wider consumption. This also seems to place Carter in a growing camp of Franco acolytes, like Val Lauren and Jay Anania, who star in or are directed by Franco in experimental exercises that seem pickled in pretension.

Title cards reveal thoughts and or feelings about transpire, almost as if establishing a series of vignettes, hinting at grander themes, like Catherine’s Rorschach inspired paintings and their symmetry, hinting that for most things a twin (or shadow, or double) exists, somewhere, identical except for opposing features. Supposedly set in 1963, Carter jumps eras (and reimagines history, as evidenced by a scene featuring blacks and whites wearing similar clothing, frequenting the same establishment and in close proximity), with an exchange about the 1978 Jonestown Massacre, a random flourish that only serves to remove us from its intentions.

As we’re rushed into a rather dilapidated finale, the narrator informs us that “there are times when people are taken, and times when people just leave” to explain an unprecedented event. For a film that seems to be exploring the difficulty in creative expression, Maladies seems afflicted by an inability to say much at all.