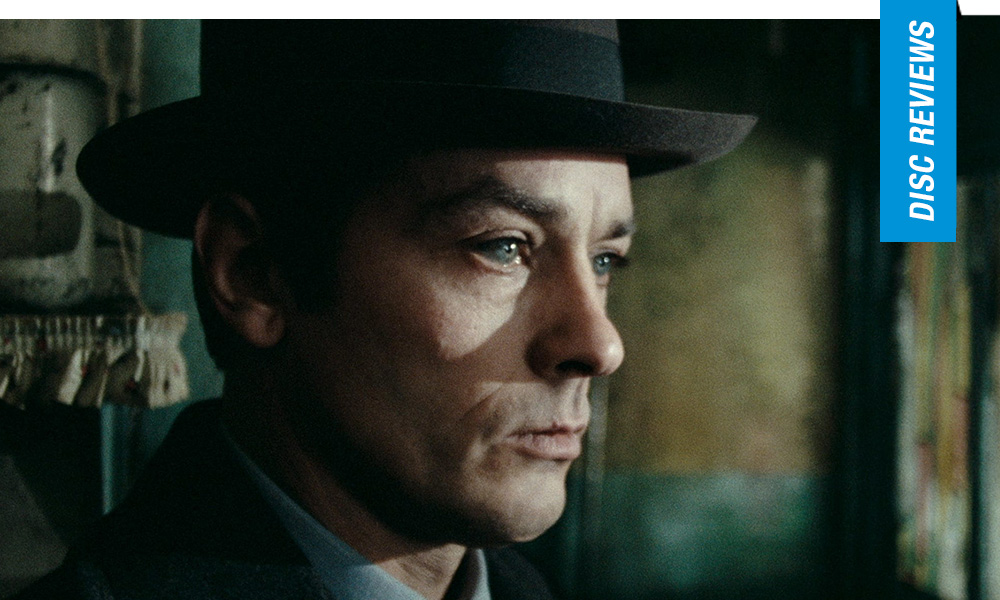 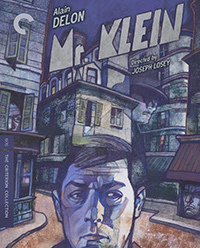 In Rainer Werner Fassbinder’s Chinese Roulette (1976), a venomous marital melodrama, a character played by Margit Carstensen provocatively inquires, “Who would this person have been under the Third Reich?” In the generation removed from the dark shadows of WWII, a glut of 1970s spectacles grappled with the sinister aftermath of their parents’ atrocities, an inheritance which pushed well beyond the limits of a divided Germany.

Premiering the same year was Joseph Losey’s late period masterpiece, Mr. Klein, a Kafkaesuqe escapade about an amoral art dealer who receives karmic retribution for his aggressive ambivalence and opportunistic profiteering. As directed by Losey, the blacklisted American director whose native banishment resulted in one of the most interesting cinematic trajectories across periods and cultures, there’s a distilled sense of just desserts in his presenting a protagonist whose ruin seems not only inevitable, but welcomed. The icy gaze of Alain Delon suggests a predator on the verge of extinction, a primordial hierarchy blinding him to his own mortality, and the actor’s inherent coldness furthers the sense of distaste framing the characterization.

We’re introduced to Delon’s Robert Klein in his naturally rapacious glory, haggling drastically reduced art away from French Jews desperate to flee Nazi occupied Paris in 1942. He’s a handsome, suave elitist long accustomed to back door bargaining, engaged in a parasitic relationship with rival Pierre (Michael Lonsdale), whose wife not-so-secretly sleeps with Robert. His younger lover Jeanine (Juliet Berto) seems to be a permanent fixture of his bedroom, though she mildly disdains his ambivalent and somewhat cruel demeanor. When he unexpectedly receives a Jewish newspaper addressed to him at his doorstep, he’s aghast. Reporting this slight to the police, it appears there’s another Robert Klein, who happens to be Jewish. Looking to distance himself unequivocally from such a distinction, Mr. Klein begins a personal investigation in search of the other man, who supposedly looks just like him, if judging from the brusque concierge (Suzanne Flon) who rents a room to his Jewish counterpart in her dilapidated flop house. He intercepts a correspondence addressed to the other Klein from his wife Florence (Jeanne Moreau), who seems both amused and perturbed when the wrong man shows up for her summons. The harder he tries, the more it would appear Robert Klein is becoming the man he wishes to find, while the authorities seem satisfied in rounding up the only Mr. Klein they keep running into.

Discussions on Losey’s filmography tend to revel in its apparent ‘unevenness,’ or at the very least, specific periods speckled with oddball anomalies. But identity defined by transition, either in the wake of something drastic or a fugue state, is often at the heart of his narratives, and Delon’s Mr. Klein is cut from a cloth including Losey’s remake of Fritz Lang’s M (1951) and even the Mia Farrow character in the strange, surreal Secret Ceremony (1968).

Reuniting with his frequent DP Gerry Fisher, who shot several Losey titles, including Accident, The Go-Between, Secret Ceremony and A Doll’s House, there’s a significant sense of displacement as regards conjuring 1942 Nazi occupied France, formatted here as a bleak, Twilight Zone version of a cityscape being encroached upon by the wilderness. Fisher’s penchant for the foreboding would define the genre tinted smatter at the end of his career, lensing Black Rainbow (1989) and The Exorcist III (1990), but he brings a sense of horrific disorientation to this early staging of the infamous Vel d’Hiv roundup signifying the dark pinnacle of Vichy collaboration (later re-staged in films like La Rafle in 2010 or the pulpy Sarah’s Key in 2009).

But the black hole at the center of Mr. Klein is the titular character himself, with Delon often caught observing himself in reflection, always just having missed the nagging Jewish doppelgänger who’s presence is compromising his comfortable existence as an opportunistic leech. While one can’t escape the essence of Kafka, there’s a pallor of Dostoevsky, Nabokov’s Despair or even Daphne du Maurier’s The Scapegoat skittering through this ambiguous material, where the only sure thing is the toxicity of Robert Klein, whom the elegant Jeanne Moreau succinctly puts in his place by referring to him as a vulture. The only innocent might be his clingy paramour Jeanine, played by an increasingly distressed Juliet Berto.

As his frenemy, Michael Lonsdale, assumes the role initially occupied by Robert, usurping his fantastic art collection for his own gain. Originally written by Franco Solinas and intended as a vehicle for Costa-Gavras, Losey brings a sense of despairing wryness to the film, castigating both the complicity of the Vichy government as well as taking vengeance upon solicitors of pain and exploiters of tragedy. There’s a subversive mechanism going on with Losey taking aim at his Mr. Klein, positioning himself as the authority dictating the demise of another, mimicking his own banishment. For what are we intended to feel in the closing moments of Mr. Klein, where a toxic carpetbagger becomes worn down by unthinkable evils instilled as a political norm? Some might say a wearying, ambiguous sense of schadenfreude.

Surprisingly, Mr. Klein is the first Joseph Losey title to officially join the collection, though it’s beautifully presented as a new 4K digital restoration in 1.66:1. Criterion includes interviews with Delon and Losey from 1976, as well as new interviews with critic Michel Ciment and editor Henri Lancoe. Additionally, a 1986 documentary, Story of a Day, provides a more in depth examination of the infamous Vel d’Hiv Roundup.