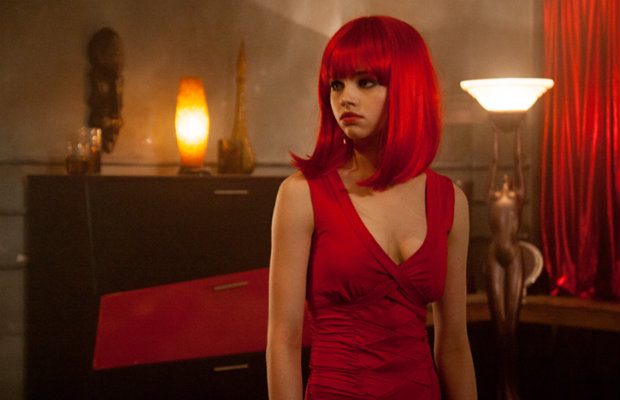 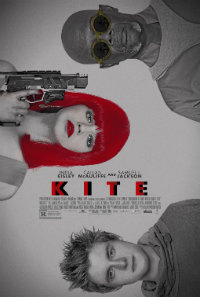 Those familiar with Yasuomi Umetsu’s 1998 fifty minute anime of the same name will be sorely disappointed in Ralph Ziman’s modernized update of the controversial Kite. But a faithful, live action rendition would have crossed the boundaries and limits of what defines exploitation cinema since we’re talking about an orphaned school girl sex slave assassin. A more fitting nod came from Quentin Tarantino, who culled the origin tangent of O-Ren Ishii in Kill Bill from Umetsu, in an anime sequence deemed too violent for live action. While a faithful adaptation would have seemed gratuitous, this end product is unable to elicit any kind of response at all, feeling utterly uninspired in look, tone, or content.

In a ravaged world facing the after effects of a global financial collapse, a young girl in Johannesburg named Sawa (India Eisely) is in the middle of trying to infiltrate a prostitution ring run by an a nasty pimp known as The Emir (Zane Meas). Since the world’s gone to hell in a hand basket, human trafficking has become the norm, especially when it comes to young women. So Sawa poses as a prostitute herself, using a special gun that has exploding bullets. But Sawa has a more ambitious objective—to track down the man that caused the untimely death of her parents. She is assisted by her father’s ex-partner, Karl Aker (Samuel Jackson) who covers her messy tracks for the other detective on her trail (Deon Lotz).

Before initial filming began, the original director attached to the project, David R. Ellis, was found dead in the bathroom of his Johannesburg hotel room, the stuntman turned director behind a pair of Final Destination films, and more famously, Snakes on a Plane. Perhaps the last minute replacement of Ziman explains why Samuel Jackson is so erringly underutilized in material that could have greatly benefited from some sort of abrasive presence to shake it up a bit. As it is, set in a future after the ‘financial collapse,’ Lance Gewer’s cinematography simply portrays a drained, industrial landscape that reeks of contained shooting locations. Sawa gets a schlocky pink wig, which jumps out like a neon light in the denuded greys of her glum world, which only seems to mark the film as a pronounced copycat of something from Luc Besson or even Kick Ass, spackled with a generously humdrum electro pulse that signifies, you know, future-ish ambience.

In a world already well accustomed to female teenage assassins (two played by Saoirse Ronan on different ends of the quality spectrum, in excellent form for Hanna, then kitschy kookiness in Violet & Daisy), India Eisely’s Sawa is instantly forgettable. With zero screen presence and absolutely no defining traits beyond the declawed basics of her narrative, Eisely is about as effective as a vengeful fembot, while Jackson is seemingly dialed down to administer the not-so-surprising twist. Other major cast member Callan McAluiffe of Luhrman’s The Great Gatsby is presented in near abandon, as if even the camera is eager to move on to something of greater importance. A compromised endeavor before it was even able to get off the ground, Kite never reaches the heights of its word-association based title.