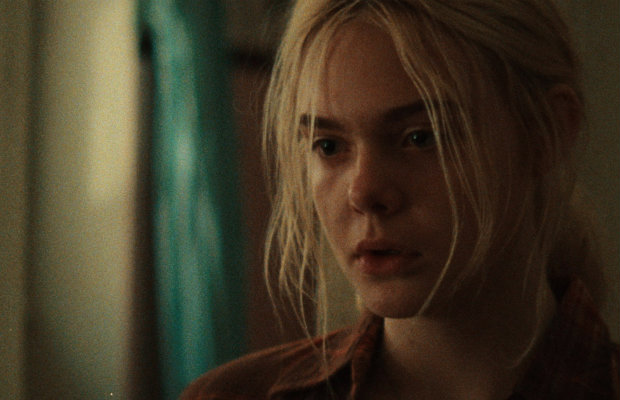 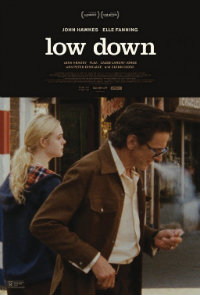 Despite taking home the best cinematography prize for Christopher Blauvet (who also provided superb camerawork on Kelly Reichardt’s 2013 title Night Moves) after its premiere at Sundance and snagging Elle Fanning a Best Actress award at the Karlovy Film Festival, Low Down is otherwise a rather unremarkable treatment of a slipping down life, bright lights dimmed by the self-induced depravity of drugs and alcohol. Told from the perspective of the teenage daughter of jazz pianist Joe Albany, the film is the first time feature from Jeff Preiss, heretofore a music video director (Mariah Carey’s “Emotions”) and a documentary cinematographer. Perhaps this explains why much of the film feels concerned with superficial detailing of a vintage time and era rather than it does as a chapter in a young woman’s life growing up with troubled yet notable parental figures.

In 1974 Hollywood, jazz pianist Joe Albany (John Hawkes) struggles to remain sober as he battles heroin addiction and cares singlehandedly for his teenage daughter Amy (Elle Fanning). Her mother (Lena Headey) flew the coop long ago, a woman keener on feeding her alcohol addiction, returning intermittently to set up failed fantasies of working as a singer once more alongside her prestigious husband. But as he fails to adhere to the guidelines of his probation, a relapse sends Albany back to rehab and Amy is forced to live with her caring grandmother (Glenn Close), a woman at a loss as to how to help her gifted son. As years go by and Albany absconds to the jazz scene in Europe, only to be deported two years later, Amy begins to realize her parents will never mend their broken ways of existence.

At the center of this autumn hued bauble are a pair of performances that anchor the film without glorifying the dramatic potential of heroin addiction and alcoholism. John Hawkes gives the kind of warm performance that may be one of the most underplayed addicts committed to a film, a charming father figure that rears a Mr. Hyde personality when he’s high. But most of the time, he’s trying to get by and find work as a musician.

Lena Headey pops up as the absent mother, an alcoholic that nails one vicious exchange when her late adolescent daughter goes on a bar crawl to seek her help. And as the young Amy, Elle Fanning proves once again what a fine young actress she is, here playing another child with a loving yet veritably absent father figure. Wallowing in a decrepit Los Angeles hotel, one can’t help but be reminded of her turn in Sofia Coppola’s 2010 Somewhere, lounging around the Chateau Marmont forever waiting for her actor father played by Stephen Dorff. And as her grandmother, a dowdy Glenn Close (who actually isn’t all that much older than Hawkes), resembling a period Cloris Leachman, also gives an underappreciated performance. Other supporting players such as a fetish porn actor played by Peter Dinklage and strung out neighbor Taryn Manning, don’t get much to work with. More noticeable is a nearly unrecognizable Tim Daly as Dalton, a cohort of Albany’s.

With more precision granted to conveying his comfort with the musical influence of Albany, Preiss seems more in tune with recalling the period, a repeated reference to Welsh poet Dylan Thomas also an appropriately timed homage to the tragedy of talent drowned out by addiction and vice.

Recalling the seedy warmth of 1970s Hollywood, Low Down doesn’t quite capture the longing and despair of Albany and his daughter, as they’re never really outlined beyond having to deal with this particular situation. A late introduction of Fanning’s epileptic beau played by the generally arresting Caleb Landry Jones also doesn’t do much to add to the fact that Albany, though he may have loved his daughter, was much too wrapped up in his own failing dreams to grant her the attention she so craved and deserved.