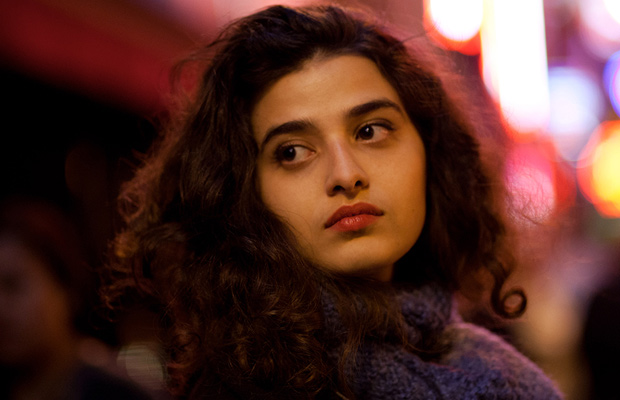 A Girl in the World: Arbid’s Coming of Age Portrait Enhanced by Generous Lead

French director Danielle Arbid returns with Parisienne, her first feature since 2007’s critically dismissed A Lost Man. Returning to the Lebanese roots that informed her 2004 debut In the Battlefields, it’s a semi-autobiographical period piece exploring the a familiar trajectory of a woman discovering her identity while lost in a hostile, foreign environment. Besides featuring an impressive array of young, notable French actors in the supporting cast, Arbid discovers an arresting new presence with her lead Manal Issa, an actress making her screen debut. Warmly portrayed without depending on extreme emotional fluctuations to hold attention, it’s an overly familiar if engaging character study of a young woman forced to deal with unfair cruelties from patriarchal and political realms. Of course, it doesn’t hurt that the woman in question is as strikingly beautiful as Issa, but that’s a benefit Arbid successfully makes us overlook, for the most part.

In the early 1990s in the suburbs of Paris, Lina (Issa), a young Lebanese woman, has been living with her aunt and uncle in order to attend university and gain opportunities unavailable to her at home. Unfortunately, whenever her aunt is away for an extended period of time, her uncle (Waleed Zuiater) makes sexual advances, goading Lina to flee. Ending up in Paris, she is able to register for classes, though ultimately not for the ones she actually wishes to attend, causing additional dilemmas down the road. She sparks the interest of a professor (veteran character actress Dominque Blanc) who extends a helping hand to Lina. But left without a place to sleep, she depends on the kindness of strangers by glomming onto classmate (Claire Ponsot) for a place to stay, though this ultimately leads to hurt feelings over an employment snafu involving the young woman’s older sister. A string of romantic relationships begins to inform her of a sense of agency following a troubled tryst with the married Jean-Marc (Paul Hamy). An affable waiter, Julien (Damien Chappelle) is his successor, but when Lina has to return home for a summer following a familial tragedy, Julien takes off for the US. Eventually, her residency permit is up for reconsideration and Lina faces deportation. Thanks to her professor’s assistance, she meets a kindly lawyer and eventually begins an affair with his son (Vincent Lacoste).

Pushed between extreme political entanglements, from her friendship with a royalist (India Hair) and her skinhead boyfriend (Bastien Bouillon) and a larger student body aching for socialist reform, Lina tends to be a welcome anomaly in every arena thanks to her mild mannered ambivalence and great beauty. The original French title, Peur de rein, which translates to ‘Fear of Nothing’ is a much more apt moniker for a film about a naive young woman new to the untoward ways of various viewpoints in the City of Lights. Beyond discussions revolving around period politics, the early 90’s setting seems more passing circumstance, while the lectures Lina attends gloss over the usual subjective interpretations of artistic designation and literary courses grappling with the eternal words of Marivaux and Moliere.

Popular character actors like Paul Hamy and rising star Vincent Lacoste are welcome additions to the packed periphery of Lina, but there’s no one that equals the presence of Issa, whose beauty sometimes overwhelms DoP Helen Louvert’s (Pina; The Wonders) frames. Co-written by Julie Peyr (who wrote Desplechin’s last two features), Parisienne is a generous character study of a soft spoken yet complex central female character.

In a sea of similar cinematic formulations, it may have trouble reaching a wider audience even if Arbid’s treatment is much more engaging than many of its cousins. At the very least, a generous critical reception should help put the accomplished director on track for additional features following her recent return to shorts and a television feature, which are formats that have difficulty crossing over into English speaking territories.