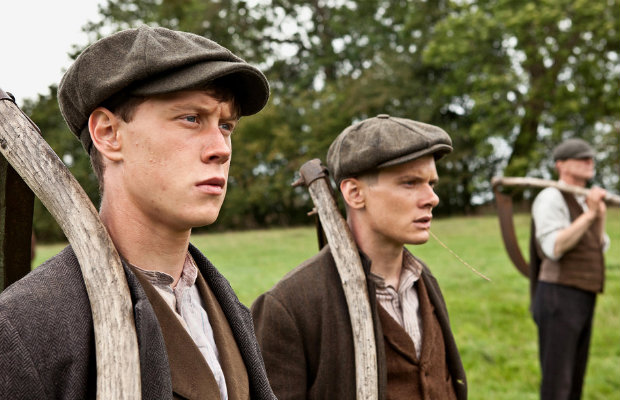 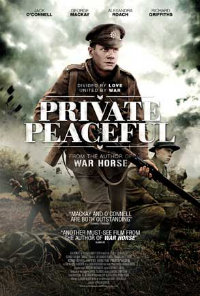 His first film since that ill-advised 2001 remake of Sweet November, which sought to rekindle interest in possible on-screen chemistry between Charlize Theron and Keanu Reeves, Irish director Pat O’Connor revisits darker, historical themes with Private Peaceful, a WWII tale as told through the eyes of two brothers from Devon. It’s perhaps the most serious subject O’Connor has tackled since some of his more celebrated 80s titles, like the IRA romance thriller Cal (1984) which nabbed Helen Mirren one of her two Best Actress wins at Cannes. And yet, while it’s great to find O’Connor avoiding the type of soapy schmaltz he careened into during his last several features, his dip into the over explored WWII era never manages to register as emotionally, thematically, or narratively resonant.

Private Tommo (George MacKay) sits in a British army cell, awaiting sentencing from a court martial, where both he and his older brother Charlie (Jack O’Connell) face a firing squad from charges made by superior Sergeant Hanley (John Lynch). We back track in time to the boy’s youth to 1908 England, where they share a happy childhood in Devon with mother (Maxine Peake) until a tragedy strikes and claims their father. The boys and younger brother (Kyle Summercorn) must now depend on the kindness of their cruel aunt (Frances de la Tour) to help raise them, trying to live life as best they can until war breaks out and the young men are forced into battle.

Based on a novel by Michael Morpurgo, who also penned War Horse, which became the celebrated 2011 adaptation from Steven Spielberg, O’Connor takes a more workmanlike approach to material, enhancing its dusty, moth-eaten feel. Just as with Horse, however, the human element seems taken-for-granted, even glossed over. Interactions are rife with cliché, such as the boys’ youthful familial interactions, represented with moments meant to give one a warm glow but feel unabashedly corny. Tragedy is examined with an equally contrived angle, such as a patriarch being felled with his tree, racing to push his (for whatever reason) immobile child away from its crashing trunk. Child actors are uniformly amateur here, and supporting characters suffer from equally rigid formulation, such as a dopey Colonel played by Richard Griffiths, and the irritatingly one-note John Lynch (whose breakout role was in O’Connor’s Cal) as an evil Sergeant.

The real reason we’re at last catching a theatrical glimpse of the film is most likely due to the upcoming stars playing the Peaceful Bros. As the lead, MacKay has headlined several notable titles since filming, including Pride, How I Live Now, and the severely under marketed but worthwhile For Those in Peril. He has the less interesting role here, a majority of the dramatic tension due to the more vitriolic presence of rebellious Jack O’Connell, whose magnificent turn in David Mackenzie’s Starred Up premiered earlier this year (and he headlines director Angelina Jolie’s latest, Unbroken).

Actress Maxine Peake, who has a sort of Billie Whitelaw air about her, should be included as a worthwhile element (even if a much smaller role in The Theory of Everything utilizes her arresting presence to better effect). But beyond small snippets of performance worthy moments, Private Peaceful is instead stuffed with haphazard writing, such as a moment meant to convey memorable jubilee forcing a young child to cry out “I want to die right here and now.” But the biggest problem is that we’ve all seen this war-torn rendition before, countless times, and to better effect.