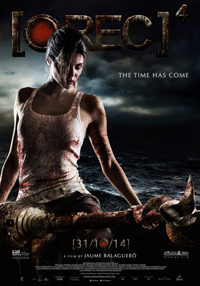 The good news is that we’ve probably seen the last creative juice finally squeezed out of what started as one of the best found footage horror films to arrive in the bleak, stupendously limited subgenre with [Rec 4]: Apocalypse. Originating with the innovative and even effectively frightening first installment back in 2007, co-director Jaume Balaguero and Paco Plaza created one enjoyable sequel back in 2009 with [Rec 2], at least in as much as it cleansed our palette of the unnecessary 2008 American remake, Quarantine. But then things got murky, with Plaza breaking off to make his own (assumedly) final chapter, [Rec 3]: Genesis, which lopped off the found footage angle after an extended intro and went into comical hyper drive. Now, Balaguero comes back alone for his own stamp of finality, which does acknowledge the existence of the third film, but carries out the strand developed from the first two. Tracing the virus’s history now feels akin to explaining the origins of half-siblings, and with about as much flagging interest as that entails. Nowhere near as energetic as the first two rounds, perhaps due in part to our desensitization as well as the limited means of thrills and narrative exploration afforded material once too much has been examined, moments of slight innovation creep in, but this is one more flesh-eating virus we’ve become immune to.

We return to the dreaded apartment complex that stood as the ravaged host to a deadly religious based virus that turned those it infected into zombies. Television host Angela (Manuela Velasco) and her television crew, as we all know, got trapped inside with the denizens of the complex, and if you recall correctly, something rather disturbing happened to her. Of course, it’s all conveniently on film, so when she’s finally yanked out, apparently alive and well, she’s spirited away to an oil freighter to be contained and examined by scientists. Only, there’s already a crew on board the freighter and they have no idea what’s in store for them. Although Angela at first tests negative for the blood borne demonic disease, it soon becomes apparent that she’s now patient zero, and whatever’s inside her holds the key to defeating the outbreak that begins to consume the ship.

Whereas the claustrophobic apartment complex was an ingenious setting for the initial outbreak, especially as learn the increasingly drastic stakes the outside world is taking to keep everyone inside quarantined, this latest debacle seems a pale echo of the original. Now, the zombies that keep manifesting accost groups of victims as they crash down the ship’s corridors, each coming to a grisly demise, a formula that quickly gets old. This time around, the once sufficiently panicked Velasco seems less energetic, and stretched across three narratives, there seems hardly anything left by way of characterization—now she’s one more wan identity in a pool of potential, inevitable victims. Javier Botet is also a returning cast member, but unless you’ve only recently watched the first film (for he’s only briefly in the second), you might overlook that altogether.

Balaguero’s bigger budget doesn’t command better thrills, and the glossier aspects of the [Rec 4] instead work against it, fashioning it into another predictable outcome in a scenario that’s become too familiar to be thrilling or effective when done by the numbers. That’s not to say Balaguero should have returned to found footage techniques, but a more inspired end to a franchise that starts off so memorably seems necessary. DoP Pablo Rosso, who worked on all four films, does capture a few memorably gory scenes, including a zombie monkey attack that results in jumpstarting a mass infection aboard the ship, but maybe this just shouldn’t have been a franchise. Because the subpar quality of these sequels only succeeds in blighting the original memorable delights of the first installment.