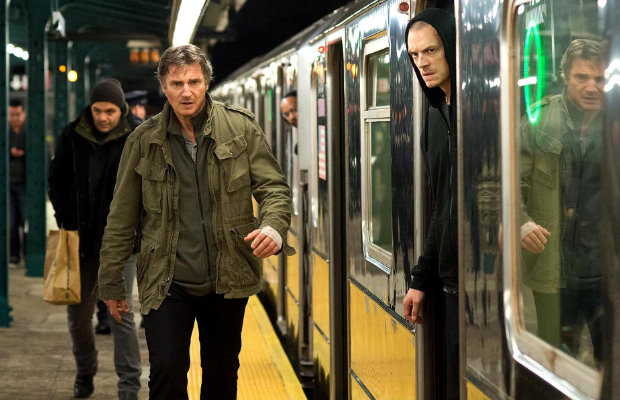 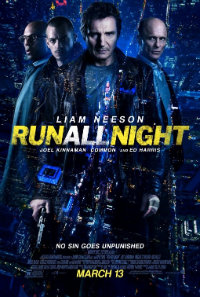 You may not have realized it, but while the Taken trilogy was warping its course through a series of cinematic banalities, ripened action star Liam Neeson set off on a course of similarly themed vehicles with director Jaume Collet-Serra, resulting in this, their third collaboration, Run All Night. A familiar cocktail of second generation blue collar honor struggling to overcome the stagnant moral nadir of organized crime sleaze gets streamlined into a by-the-numbers action flick that only manages to feel as stale is it is unbelievable, like nuggets of Scorsese whirled through a Luc Besson meat grinder. At this point, we kinda know what to expect from the Liam Neeson school of action film stardom, and wading through screenwriter Brad Ingelsby’s disappointing treatment of hard-won street redemption, you won’t find anything remotely surprising.

Grizzled loner Jimmy Conlon (Neeson) seems to be without family or friends. Lonely and alcoholic, he’s looked after by his old friend Shawn (Ed Harris). Growing up together, Shawn became the head of an organized crime ring and Jimmy became his number one trigger man, an assassin known to the media as the Gravedigger. Detective Harding (Vincent D’Onofrio) is still eager to take Jimmy down, but could never make anything stick. Jimmy’s own son Mike (Joel Kinnaman) keeps his wife (Genesis Rodriquez) and their two daughters out of Jimmy’s life, but when Mike happens to witness Shawn’s wayward son Danny (Boyd Holbrook) ruthlessly kill some people, Jimmy must step in to defend his blood, which in turn sparks the ire of Shawn.

For some reason, Collett-Sera is determined to bring us repeated personifications of the dependable quality of Liam Neeson, guiding the actor through the identity crisis of convenient Eurosleek conspiracies in 2011’s Unknown and as an alcoholic air marshal in 2014’s Non-Stop, and now, as an alcoholic semi-retired hit man in Brooklyn with another set of parenting issues. Considering the simplicity of this narrative, the set-up feels overly prolonged (a bizarre sequence featuring Neeson as a drunken Santa feels stilted), depending as it does on a series of conveniences that always tend to feel contrived, such as the use of a random black kid played by Aubrey Joseph, on hand to film the footage that will bring us to the all’s-well-that-ends well finale (used similarly but less effectively as a character in another Neeson flick, A Walk Among the Tombstones). The same can be said about the late entrance of the professional assassin portrayed by Common, a mere phantom of a character used to distract us until we reach the inevitable end of this formula.

Perhaps in an effort to differentiate this film from the claustrophobic confines of the airplane in Non-Stop, Martin Ruhe (Corbijn’s Control and The American) swoops the camera like a superhero throughout the NYC boroughs, though for no apparent purpose other than to connect events in a fashion that sort of reads like, “Meanwhile, in this neck of the woods…” It appears to be an effort to magnify the sprawling urban landscape, except that this feels unnecessary considering the city at hand. But whatever your qualms about these minor details, Run All Night feels innately flawed for more important reasons, those having to do with the authenticity of its characters’ actions. Collett-Serra takes great pains to establish the unique friendship of Neeson and Harris, portrayed as such intimate friends that they may as well be brothers. The wayward son played by Boyd Holbrook (whose demise is paired with a bizarre cover of “Spin Me Round”) is shown to be a mere twerp, rather a disgrace in his father’s eyes, so the retribution Harris’ crime lord seeks on his brother/friend for an act of self-defense never registers as a realistic response.

Other supporting players are treated with equal short shrift, including Nick Nolte who appears for the sole purpose of a revealing a not-so necessary detail about Neeson’s unwillingness to question Harris, and worse, Vincent D’Onofrio as a detective seemingly obsessed with taking down Neeson to such an extent that he basically begins frothing at the mouth when he spies his nemesis in a late-night deli. For good measure, an unconscious and hospitalized Lois Smith is on hand to provide her son Neeson with the paper and pen he needs to write down a list of victims for D’Onofrio’s detective. Of these cast members, Joel Kinnaman fares the best, but how his character is included is utterly ridiculous—of all the limo drivers in Brooklyn, he’s the one hired to drive a pair of Albanian perps to Holbrook’s house? Collett-Serra tries to back the film into a full blown action flick by its third act, but these sequences play out with numbing indifference.