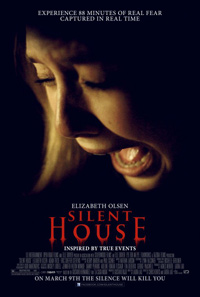 A remake of a 2010 Uruguayan film of the same title, the producer and director of 2003’s Open Water have teamed up to co-direct Silent House. Like the original film’s gimmick, the entire film is purportedly comprised of one continuous shot, which, unfortunately, undermines the effectiveness of both features. But what directors Chris Kentis and Laura Lau have managed to do is create a remake that does have several other improvements on the original, namely a better written narrative and a genuinely captivating performance from Elizabeth Olsen.

While helping her father (Adam Trese) and uncle (Eric Sheffer Stevens) renovate the family’s decrepit lake house in order to sell it, Sarah (Olsen) senses that there’s something strangely eerie about the house. Discovering a serious case of mold that seems to have impaired the entire infrastructure of the house, she’s visited suddenly by a girlhood friend. Sarah can’t recall her friend (“I swear it’s full of holes up here,” she quips, tapping her head) and the two agree to hang out later. Since the house doesn’t have electricity, the three of them are forced to use battery powered lanterns. As darkness falls and Sarah’s uncle leaves in a huff, she hears a disturbing noise upstairs and tasks her father with checking on it. As the father/daughter team investigates, some creepy Polaroids are discovered, which her father quickly confiscates. And then suddenly, he disappears somewhere in the house, and Sarah sees a threatening looking man sneakily stalking them, intent on causing them harm. Terrified, she finds her father, badly beaten, and finds herself caught in the house without a way out. Finally finding a way to escape, she runs into her uncle, who has just returned. After explaining frantically what happened, her uncle insists they go inside to retrieve her father.

As with the original, there are some genuinely creepy moments, particularly when we see indistinct flashes of a stranger coming at Sarah. But whereas the original film doesn’t quite tell us why the young woman doesn’t just leave (until the twist), Kentis and Lau have done an excellent job depicting why she can’t quite seem to get out of the house for a while. And while the narrative twist is less nonsensical this time around, Lau’s screenplay unfortunately goes too far with its explanations. Good angle, but should have been much more subtle to be effective. Much depends on the performance of the lead character, and Olsen, who’s in every frame, is excellent. Her cast mates, however, are quite wooden, in particular, Adam Trese as her rather strange father. While her dialogue may not be any better written than his, Olsen manages to make her performance natural, charismatic, and vibrant, whereas the lines fall out of the other actors’ mouths like lead.

And because the filmmakers insisted on repeating the same gimmick as the original by filming in one continuous shot, many scenes appear to be rough, shaky, or jarring. The thrills of the horror genre depend on careful editing, atmosphere, and an eerie dread that tricks our minds into thinking something dreadful will happen at any moment. (For example, look at how effective Jacques Tourneur’s 1940s thrillers are, in particular Cat People, 1942.) Too often, we’re pulled out of the film when we notice moments in Silent House that we know could have looked better if it had been filmed in more than one shot. We’re supposed to be biting our nails, instead we’re looking at technicalities. This is a horror film, not Rope (1948) or Russian Ark (2002), other films notable for their director’s use of continuous shots. On the other hand, there’s a lot to admire with this remake, which does play better than the original, and manages to showcase a talented young actress’s abilities.