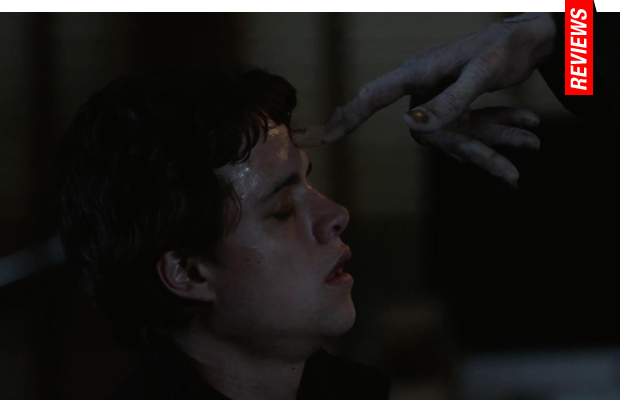 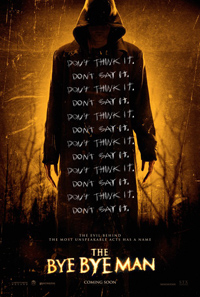 “Don’t think it, don’t say it,” may be the ironic takeaway after witnessing director Stacy Title’s second rate boogeyman knock off The Bye Bye Man, an unfortunately named horror film which is somewhat amusing considering the surname of its director. A quartet of naive twentysomethings accidentally awaken the eponymous malevolent spirit, a hooded scar-faced harbinger of doom who is accompanied by his skinless, incredibly CGI’d hound from hell, shortly after they move into their own isolated home in rural Wisconsin. Unfortunately, the film can’t even quite live up to its own familiar distinctions, based on the very YA sounding novel The Bridge to Body Island by Robert Damon Schneck.

Best friends Elliot (Douglas Smith) and John (Lucius Laviscount) decide to move into their house off campus along with Elliot’s girlfriend, Sasha (Cressida Bonas). But Sasha begins to feel something is a bit off about the house, so she invites classmate Kim (Jenna Kanell) over to cleanse the house since the young woman has a certain sensitivity to these types of things. However, Kim’s séance makes Elliot utter the name he saw scratched into the bottom of a bedside table, the Bye Bye Man. Afterwards, the three young folks begins to experience strange hallucinations and various health issues. As Elliott starts to lose his mind thinking Sasha and John are lusting for one another, he manages to link the happenings with an unpublished news item from 1969, where a crazed journalist (Leigh Whannell) went on a killing rampage, only afterwards uttering “Don’t think it, don’t say it.”

As far as technical prowess goes, one could do a lot worse than a campy evening of entertainment than The Bye Bye Man, although this is a far cry from Title’s most prolific offering, 1995’s Cameron Diaz headlined The Last Supper, a black comedy about a group of friends who invite people over and based on the interaction, decide whether to poison them and use them as fertilizer for the tomatoes or let them live (it also sounds like the more relevant English language version of France’s The Dinner Game). Every now and then, the film scores an oddly creepy element, with bony fingers (Doug Jones as the insidious figure, the actor who played the Pale Man in Del Toro’s Pan’s Labyrinth) or glowing eyes (an Amityville Horror rip-off) in the dark. Likewise, Jonathan Penner’s screenplay has a fair share of offbeat elements about it, such as bizarre homemade card John supposedly writes to his new roomies fashioned like a ransom note with a strange message. And Title isn’t completely averse to straight up camp, thanks to an entertaining supporting role for Cleo King as an unfortunate librarian, or a surprise appearance from Faye Dunaway as Widow Redmon, a funny bit which does little to further the nonsensical action but at least gives the actress her first theatrical appearance in over a decade.

Less cohesive elements would be the earnest appearance of Carrie Anne Moss as a thoroughly intuitive detective, or an outright terrible performance from Leigh Whannell (the scribe of contemporary genre films directed by James Wan, like the Saw and Insidious franchises), although these extremes are a lot more interesting than the tepid sexual tensions playing out between the three leads, all of whom give serviceable performances in rather subpar characterizations. The film has a sort of late 90s feel, if mostly for the rampant YA craze inspired by Wes Craven’s Scream films and I Know What You Did Last Summer. This PG-13 rated schlock masquerades as another of those urban legend staples borrowing heavily from the visualizations of Sinister (2012) and without the kind of subtext which still makes Candyman (1992) feel like a relevant attempt at contemplating the kind of power belief holds as far as personifying fear. If there is an origin story for The Bye Bye Man, Title’s film does little to make its audience compelled to know more, beyond hoping someone had had the good sense to give him a more intimidating moniker.