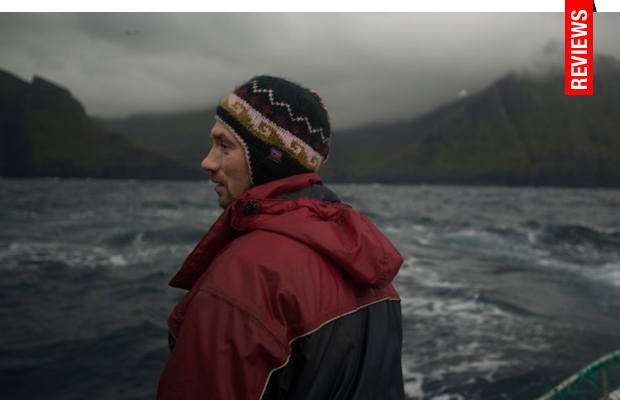 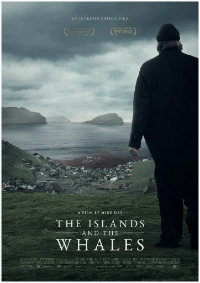 Very much a microcosm comparable to the cultural inertia invested in the oil industry we’ve gathered over the last hundred years and are just now beginning to see the catastrophic consequences of, Mike Day‘s gorgeous and complexly woven The Islands and The Whales carefully dissects the delicate situation unfolding in the Faroe Islands.

Having long prided itself on remaining a generally self sustaining community of fisherman thanks to the abundance of sea life in the bays that border the archipelago north of Scotland, the inhabitants are now having to face that facts that not only is humanity’s maltreatment of the earth causing mercury levels to rise to dangerous levels in their traditional food sources, but the eyes of the world are beginning to judge them harshly for continuing to hunt pilot whales, a custom ingrained within the cultural identity of every Faroese citizen.

Having cut his teeth shooting and directing the Atlantic bound BBC production The Guga Hunters of Ness, Day set off to the Faroe Islands in search of the story behind the much publicized routine pilot whale hunts that leave the bays blood red and rival the horror of the suppressed Japanese dolphin slaughters depicted in Louie Psihoyos’ remarkable The Cove. Being that the Faroese have proudly hunted the currently non-endangered whales since the times of their viking ancestors and to this day celebrate in the streets with their friends and neighbors in the wake of a successful hunt, they have no shame about their actions.

So, when the hunt is on, so is Day’s camera, taking in the action from all angles, from the shore in reserved, picturesque wide shot, from the sea aboard a modest motorboat in hot pursuit among a growing fleet, and eventually, in close-up, depicting the savagery in all its ugly violence. When the cries have subsided and the men have triumphed with the help of all their modern technology, man stand victorious with blood splatted on their face just like their viking brethren that came before them.

Thankfully, these rather shockingly blunt depictions of modern whaling and similar cliffhanging seabird hunts are kept to a minimum, while the majority of the film is spent with various key community members like Professor Pál Weihe, a Faroe Islands native whose research on mercury levels in his fellow countrymen has led him to speak out against consuming not only whale, but various local fish and seabirds. Despite the scientific facts that high levels of mercury in the body can cause numerous issues, such as decreased cognitive functioning, loss of coordination and worse, most of the locals continue eating blubber and seabirds as part of their regular diet. Letting their grip of their cultural identity loosen, some have significantly reduced their intake for the sake of their health and their children’s still developing minds after having contemplated the high level test results received by Weihe before the eye of the ever empathetic camera.

And though the health concerns are alarming enough to incite anxiety, pressures from international activist groups like Sea Shepard and the declining populations of various native species like the beloved puffins only make the realities of the declining situation more stark. Yet, Day remains deeply sympathetic to these men and women who’ve grown up ingrained with whaling as a celebratory community event that brings people together and seriously saves on the grocery bills at home.

When Pamela Anderson and other Sea Shepard activists show up and hold a press conference open to the public (much like when Brigitte Bardot appeared in the arctic to support Greenpeace in their campaign to save Canadian seals back in the 70s, recently depicted in Jerry Rothwell’s excellent How to Change the World), locals pose poignant, hard questions that point out the fact that its notoriously difficult to farm on the Faroe Islands and importing foreign meats from elsewhere would likely cause just as much harm to the environment than hunting the local whales. There are no easy answers, and Day leads the dialogue along with an objective view that fosters conversation rather than accusations, even if at a point the talk becomes redundant.

Rather than centering on the conflict, much of the film sensorially celebrates the cultural heritage of the Faroese. Not only are the traditions of hunting and public celebration captured in stunningly composed, crisply rendered HD video, but the crew painstakingly recorded the audio with a rarely utilized Soundfield microphone that can digitally remap the source sound in full 3D, essentially allowing for near complete replication of the sonic environment depicted on screen. For those seeing the film in a theater equipped with Dolby Atmos, the experience is transformative in its expressive precision in portraying natural sounds.

While The Islands and The Whales may be a visually stunning, aurally impressive technical marvel, it is Day’s sensitivity to his amenable subjects and balanced approach that make the film a commendable success. It’s not without reason that the Day took home the Emerging International Filmmaker Award following its World Premiere at Hot Docs. He’s one to watch.