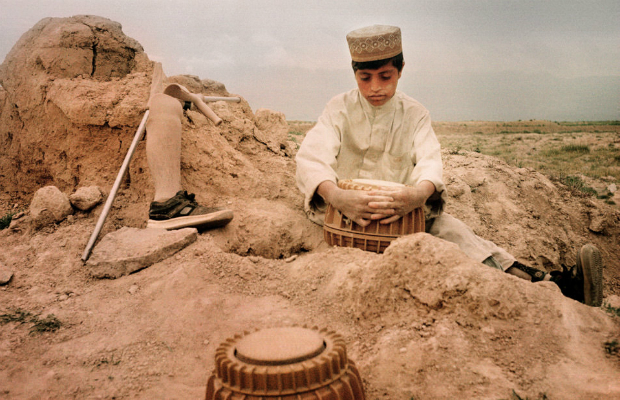 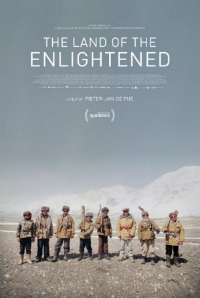 In the opening sequence of The Land of the Enlightened following a radio broadcast from President Obama that announces that American troops would soon be pulling out of Afghanistan, first time filmmaker Pieter-Jan De Pue‘s alluring vérité depiction of Afghanistan’s bleak future, makes no bones about the country’s seemingly cursed existence, plotting out the cycle of Afghan misfortune via voiceover of holy legend and images mythical landscapes. “I made a mistake,” he (god) said. “I don’t have any land left for you.” With stunning 16mm cinematography, an empathetic eye, and a great deal of courage, De Pue digs into this lawless desert world, following a renegade band of armed children as they raid weary travelers and trade the opium and lapis lazuli they take as bounty, forging in the end a futureless portrait in which morals are discarded in the name of survival.

As if mixing the violent desert bound aesthetics of Ben Rivers’ recent hybrid 16mm venture The Sky Trembles and the Earth Is Afraid and the Two Eyes Are Not Brothers with the winding narrative pull of Hanna Polak’s heartbreaking tale of children growing up in the garbage dumps outside of Moscow in Something Better To Come, De Pue sets about lensing the rugged existence of Afghan kids as they work the local lapis lazuli mines alongside adults, scavenge for old Soviet mines, tank shells and bullet casings for scrap, and assault traveling caravans in an attempt to impose their youthful and arrogant, but no less mighty will upon their domain. The gang of youngsters, despite their age, display a stunning apt for problem solving, having developed an interior rank with their baby-faced leader delegating duties and dealing opium to the locals with the skill of a veteran. Still an immature dreamer, he fantasizes about taking power over his country, becoming king of Afganistan, and marrying his local sweetheart, whom he eventually asks for permission to wed.

While the majority of The Land of the Enlightened revolves around the scavenging activities of the Afghan children, De Pue juxtaposes their actuality through sensorally shocking cuts against those of the American soldiers still deployed in the Pamir mountains. Anxiously awaiting the end of their tours, these are men who no longer see the Afghan children, whom they are supposedly there to keep safe, as human. Trading bullet shells for various goods, the soldiers refer to them as nothing more than cockroaches fiending for brass. Just as we’ve seen in Tim Hetherington and Sebastian Junger’s Restrepo, American soldiers are so bored they fire off rounds at seemingly anything that moves: As bullets, mortars and bombs fly – “You got eyes on them?” – “I saw some dust kick up from a muzzle flash.” It’s nothing new, but no less appalling to witness, especially when De Pue cuts to an American soldier making an appeal to a room full of Afghan locals, attempting to explain his position and gain their trust, or worse, when a team of soldiers violently raid an Afghan house, tearing it to pieces in the process.

In De Pue’s eyes, this is a country still in the dark ages, set back centuries by war and foreign occupation, and still looked down upon with scorn, even as militarized troops are sent by the thousands as aids to suppress the terrorist cells still lurking within its borders. By giving his film the provocative title The Land of the Enlightened, the filmmaker implies that the nation’s seeming naïveté is in fact a sort of simple sophistication in which they could live relatively happy lives, if uncomplicated by the greater interests of the world at large. As a desolate portrait of Afghanistan’s immediate future, De Pue’s debut documentary is a rather wild bit of non-fiction filmmaking that manages to harness the hopefulness of its vivacious subjects, while still contextualizing their still young lives within the greater picture of their nation’s continually dismal state. Even in the face of violence, drugs, terrorism and military occupation, across those barren divides dreams lay yet on the horizon.

Continue Reading
Advertisement
You may also like...
Related Topics:2016 Sundance Film Festival, Documentary Review, Pieter-Jan De Pue, Restrepo, Something Better To Come, The Land of the Enlightened, The Sky Trembles and the Earth Is Afraid and the Two Eyes Are Not Brothers, top-stories