Changelings: Israel Vs. Palestine Gets Nature Vs. Nurture Fable in Levy’s Latest 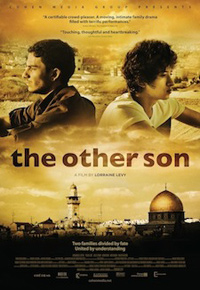 The age old Israeli-Palestinian conflict gets a dramatic facelift in French writer/director Lorraine Levy’s latest film, The Other Son. This tale of babies switched at birth is basically a fable that one imagines would seem to be a more tragic nightmare scenario in its land of origin than less volatile shores. However, the dramatic arc is not, of course, the switcheroo, but rather that the switch involves an Israeli and Palestinian baby. Now, after eighteen years, the mistake gets discovered, exposing results like those expected of a grand social experiment.

Joseph (Jules Sitruk), a nearly eighteen year old aspiring musician is about to enter into his mandatory military duty with the air force. His mother, the French born physician Orith (Emmanuelle Devos), notices that the blood test results from his physical examinations cannot possibly be correct. But when a re-test yields the same results, Orith must confide the situation to her husband, Alon (Pascal Elbe), an Israel born top-tiered army commander. Suspicious that Orith must have had another lover 18 years prior, a physician friend of Orith’s does some research before the situation gets out of control and discovers that Joseph was born to a Palestinian couple, Said and Leila (Khalifa Natour and Areen Omari). And while Orith and Alon have their son, the couple from the West Bank took home their Jewish progeny, now named Yacine (Medhi Debhi). When the secret is finally revealed to all parties involved, the two young men, obviously curious about their biological parents, both experience a shift in their identities due to the volatile social ramifications and the ongoing conflict between their respective peoples.

A devout Jew all his life, Joseph is told by his rabbi that, by default, he is no longer Jewish, and that the boy from the West Bank is, by birth, naturally more Jewish. In turn, Yacine, studying to be a doctor in Paris, is ostracized by his angry older brother, Bilal (Mahmood Shalabi), who immediately rejects Yacine upon hearing the news, his brother now a sworn enemy. Their situation, more convenient due to Alon’s access to grant several passes to navigate in and out of the West Bank, is handled best by Joseph and Yacine, while their respective families get extremely bent out of shape. Though their issues may not affect current political conditions at large, at least two families are forced to examine their prejudices and heretofore existences in order to come together in an unprecedented situation.

The Other Son works best as an interesting case study to examine ridiculous labels and traditions people use for hatred, oppression, vengeance, and misunderstanding. It has some potency in its more intimate examinations, especially when each of the young protagonists ventures into dangerous territory to bond with their newly restored biological parents. While Sitruk and Debhi steal the show, and rightly so, the always luminous Emmanuelle Devos manages to share compelling screen time with each of them separately. Because most of the conflict centers around this newly discovered identity crisis, there’s not much room for further character development, and the families become peripheral to the “situation,” often making the film, though compelling, seem like a convenient fable where we can explore regionally controversial ideas.

Denis Villeneuve’s excellent 2010 film Incendies explores similar issues, and while it’s a more visceral, troubling, and grotesquely disturbing feature, it’s only able to have a more profound affect on us. The Other Son, while it conceivably manages to warrant discussion, dances around the darker implications it barely hints at, with characters that, luckily, are mostly quite rational. However, the sadly contrived conclusion to their tale is as dismissive as your long term memory of the film may be.

Continue Reading
Advertisement
You may also like...
Related Topics:Foreign Films, Lorraine Lévy, The Other Son