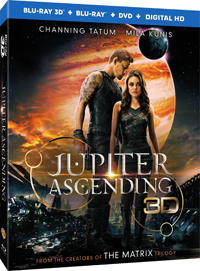 Premiering as the ‘secret screening’ at the 2015 Sundance Film Festival shortly before its theatrical premiere, the latest sci-fi extravaganza from the Wachowskis opened to general critical disdain and dismal box office returns. With a budget of 179 million, the opening weekend numbers tallied 19 million, and proffered a wave of dismal predictions as concerns the fate of future original properties being financed by major film studios. Though Jupiter Ascending isn’t without its supporters (not unlike the duo’s last outing, the ambitious Cloud Atlas in 2012). Thankfully, the foreign box office managed to curb the damaging domestic box office (it would only score a little over 47 million in the US), and it’s arrival on Blu-ray should further enhance the film’s shelf-life, even if it seems doubtful the Wachowskis will ever regain the acclaim they attained with 1999’s sci-fi classic The Matrix

Bloated with insensate characters, repetitive and overly familiar (albeit skilled) visuals, and dripping with a high dose of camp, it is every bit the misfire that the many prophesized it to be after the film’s initial nine month delay in theatrical release (originally cited as due to post-production effects). But all the king’s special effects teams couldn’t cobble this egg into a beauty. What’s most unfortunate is what another unsuccessful film means for the Wachowskis since they’re representative of a quickly disappearing subset of creative teams working within the studio system. And even if the film recoups its budget and churns a profit, the continual production of schlock doesn’t speak well for their brand. But the term ‘original’ should be used loosely in reference to this latest adventure, which plays like an amalgamation of hackneyed, derivative B sci-fi tropes.

Earth is a blue collar player in a universe dictated by a greater oligarchy currently controlled by a trio of unruly, immortal siblings. A lowly Chicago maid of mixed Russian descent, Jupiter Jones (Mila Kunis) gets wrapped up in universal politics when it is discovered that she is the exact genetic make-up of a deceased intergalactic matriarch, whose children have inherited the universe from her in three varyingly discordant chunks. There’s Kalique (Tuppence Middleton), playboy brother Titus (Douglas Booth), and evil elder Balem (Eddie Redmayne). Earth belongs to the elder Balem, ever since his mother was murdered, a planet that mines humans for a life-giving elixir that keeps them young. Due to the over expansive population of the blue planet, Balem hopes to harvest it quite soon. But, there was a catch in mother’s will concerning her future lives, and since Jupiter is basically her reincarnation, law dictates she is the new ruler of Earth. Balem orders her to be killed, but in a bid to gain control over his brother, Titus sends Caine Wise (Channing Tatum), a half human half wolf creature, to save her. This sets off a chain of events that eventually finds Caine and Jupiter developing feelings for one another.

Kunis’ inanely named Jupiter Jones, eliciting laughs whenever her alliterative moniker is uttered, is basically a space age Cinderella, a pawn in a cosmic scheme of class wars between the haves and have-nots. Whereas they were once the authors of several gender defying characters, the Wachowskis’ Jupiter is aggravatingly passive, and she’s basically volleyed between controlling forces, only to be saved, on more than one occasion, at the very last minute before making an irreparable mistake.

Moments of flat humor abound between cringe inducing dialogue (“Call me Jupe,” she cheerily advises). An early action sequence featuring Tatum skating across the Chicago skyline amidst crashing skyscrapers does manage to be energetic and even dazzle with its scope, but we’re treated to several more of these, which play out in the exact same fashion. Kunis does her cutesy, earthly best, and while she’s less distracting than in some other studio features, this is a thankless, often demeaning role.

Tatum has little to do other be gruff as he peeks out from under his ridiculous costume design, while a multitude of varying supporting characters feel as if they’ve been designed out of a desperation to equal a Star Wars-like milieu, such as a bit part played by Terry Gilliam, or the silly looking protuberant ears of Gugu Mbatha-Raw. Of course, it’s the over-the-top Eddie Redmayne that scores the most laughs, employing a reptilian whisper when he isn’t cascading into the type of villainous hysterics we would expect from Faye Dunaway. Clocking in at over two hours, Jupiter Ascending isn’t the god-awful equivalent of famed misfires like Dune (1984) or even John Carter (2012). But it’s a woeful disappointment from a pair of filmmakers whose narrative strengths used to be on par with their visual interests.

The high definition transfer holds up well in this Blu-ray package, though outside of the theater the bombastic action sequences aren’t able to distract us from the film’s narrative misgivings quite as effectively. The package promises “seven earth shattering extras,” a statement as laughably hyperbolic as the rest of the film’s absence of self-awareness.

Jupiter Jones – Destiny is Within Us:
A seven minute segment features Mila Kunis speaking her thoughts about her character, while Lana Wachowski adds her take on the creation of the heroine as Cinderella inspired.

Caine Wise – Interplanetary Warrior:
A five minute segment features the directors and Channing Tatum speaking about the origins of the character Caine Wise.

The Wachowskis – Mind Over Matter:
Cast members share their glowing support of the project and their collaborative experience working with the Wachowskis.

Jupiter Ascending – Genetically Spliced:
This ten minute feature finds the make-up and hair designers speaking of the hybrid species and characters featured in the film.

Bullet Time Evolved:
This nine minute extra has the VFX Supervisor and the Wachowskis discussing the planning of the significant action sequences.

From Earth to Jupiter (And Everywhere in Between):
A nine minute segment features the cast speaking about their initial reactions to the script, described as ‘pure cinema.’

Disappointing considering the exciting possibilities once inspired by the talented Wachowski siblings, Jupiter Ascending may be a welcome reprieve from the revolving door of Marvel super heroes. However, the dubious originality of this generic alternate universe ultimately doesn’t feel any more intelligent.