A Star is Born: Miller’s Returns to Saga of the Streets 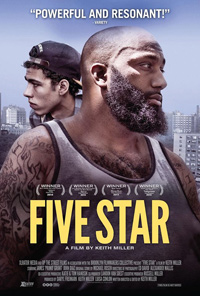 Director Keith Miller returns to a similar style of filmmaking with his sophomore film Five Star, once again utilizing non-actors basically playing extended versions of their own selves as seen in his 2012 debut Welcome to Pine Hill. Casting certainly lends the film a bit of authentic integrity, although this doesn’t necessarily translate into innovative filmmaking. A somewhat beleaguered first act slowly gives way to a more absorbing finale, but the film ends just as it finally seems to begin.

Here we focus on the member of a notorious gang, the Bloods, provocatively portrayed by a man who has lived the lifestyle since the age of twelve. However, this sounds much more dramatic than the film actually is, and some of the more laborious aspects on display in Miller’s previous film have a tendency to overpower this slight story of intertwined destines.

James ‘Primo’ Grant stars as Primo, a Bloods ‘five star’ general, alluding to his rank, which allows him the opportunity to command unquestioned respect and avoid the hustle and bustle of everyday illegal activities. We learn bits and pieces about him as he approaches John (John Diaz), the son of Primo’s deceased mentor, a young man he means to take under his wing and provide for based on the level of respect he has for the boy’s father. This includes allowing John to be a member of the Bloods without a strenuous initiation and assigning him ‘lighter’ duty illegal activities. We observe Primo as he interact with his children, including an autistic son he describes as ‘perfect.’ Despite his gang affiliation, Primo’s life is show to be otherwise banal, discussing domestic worries with the mother of his kids, residing in a Brooklyn housing project.

Primo also engages in legitimate work as a bouncer, something seemingly ironic since his power as a gang has no merit in this privileged environment where he’s relegated to a faceless, nameless duty. Meanwhile John balances a girlfriend amidst the concerns of his well-meaning mother who advises her son not to be a player and avoid following in his father’s footsteps. When a delivery goes wrong and Primo is forced to question John, violence rears its head, as well as John’s doubts about a stray bullet being the actual reason for his father’s death.

It’s fair to say Miller’s approach is similar to earlier works by David Gordon Green or Sean Baker, as far as his capacity for stylistic tendencies we’re used to seeing in documentary subjects. We’re basically observing these characters in conversation and in daily activities rather than the insidious actions we’ve become conditioned to expect from these types of environments. However, despite its credibility, Five Star isn’t all that compelling, even as it delivers a rather late staged confrontation between Primo and his new underling, exacerbated by a violent act wherein Primo takes John’s word over a more seasoned gang member. Both men, haunted by past deeds shaping their current state of being, are left behind in a sunny playground in a sequence that would have been more haunting had the narrative felt more substantial.