Going the Distance: Marques-Marcet Explores the Strain of Separation 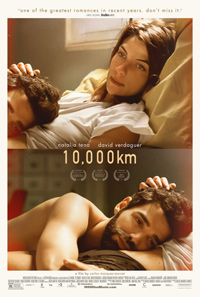 An exploration of the effects an extended period of long distance has on the stability of a once functioning relationship the core of 10,000 KM. Its title suggests an arbitrary estimate of the distance between the two particular locales, but besides suggesting the rather unhelpful capabilities of staying connected via social media, Spanish director Carlos Marques-Marcet does little to enhance a basic scenario enlivened by vague characterizations of pretty young things unable to conquer the challenges posed by unavoidable time apart. What is of more interest is perhaps the particular effect the scenario seems to have on its audiences. Many of us can relate to similar relationship woes, where absence certainly makes the heart grow fonder, but absence without a concrete date of return can inspire the opposite effect. And thus, the general colorless palette of this heterosexual couple here allows for easy projection of one’s own familiar experiences.

Premiering at the 2014 SXSW Film Festival, where it took home the Grand Jury Award before going on to collect an audience award later that year at the AFI Film Festival, this is the story of Alex (Natalie Tena), an aspiring photographer from Britain, dabbles in teaching as she lives out a comfortable romance with long-term boyfriend Sergi (David Verdaguer) in a cozy ‘l’auberge espagnol’ in Barcelona. A rousing bout of morning sex leads to talks about starting a family. Their idyll is interrupted when Alex checks her email during breakfast preparations and finds she’s been offered an opportunity to work in Los Angeles and exhibit her work. It would be a project necessitating a year away from Sergi, and his initial reaction seems less than supportive when he learns she’d put in for the opportunity several months prior. Yet off she goes, and the lovebirds communicate via Skype, utilizing Google Maps frequently to collapse the minefield of space separating them. As days go by, Sergi becomes despondent while Alex becomes more and more invested in her new wonderland.

Certainly, this is the type of sobering, genuine treatment of a scenario difficult to find in American cinema, something generally underlined by dashes of comic relief. So for audiences accustomed to something like Going the Distance (2010) with Drew Barrymore, 10,000 KM has a pronounced sense of undeniable realism. That said, the characters of Alex and Sergi aren’t granted any defining characteristics beyond their occupational desires, the sole reason for their temporary separation. If being introduced to them during a muggy bout of morning copulation seems intense, it’s used to thematically bookend the feature with a final act of desperate intercourse, highlighting the time apart has caused them to lose their ability to truly connect, and sex has become as numbing in person as it has via use of the computer screen. But more often than not, these two are annoyingly presented, both ultimately too selfish to figure out a logical, entirely possible compromise, especially since we don’t really get a sense of just how ‘successful’ Alex is as she snaps photographs all over Los Angeles. Marques-Marcet often seems like he’s doing his best to ruin the development of empathy, particularly for Alex, who describes her new neighbor in Los Angeles with nonchalance abandon as an ‘art fag.’

And so, with frivolous banality, we wander in and out of a random succession of chronological days and instances where Alex and Sergi interact online, or with Sergi attempting to draft emails or ‘review’ his lost love’s troubling Facebook posts. The turning point, as it often seems in real life, comes bubbling up from a mountain of repressed instances, resulting in a temper tantrum from Sergi played out as merely a hysterical, unnecessary episode which hits false notes.

We’re unable to muster sympathy for either of their perspectives, thanks in part to the rather glib performances from Natalia Tena and David Verdaguer (of interest, Tena starred in David Mackenzie’s problematic 2011 film Tonight You’re Mine, which involves the exact opposite scenario of a proximally motivated romance). This couple in question suffers under the weight of a self-imposed predicament. If love is the drug, neither of them is imbued by its spell.